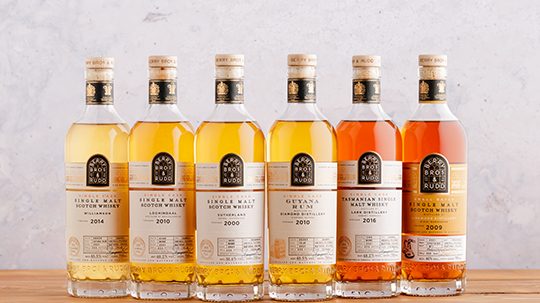 Drawing on its central London location, heritage and expertise for inspiration, the spirits bottler and producer has shared a new design, bottle and communications platform.

Having been in operation for over three hundred years,  Berry Bros. & Rudd is the holder of two Royal warrants, and has long been considered a giant of the UK wines and spirits world – and this rebrand draws on the year of the company’s founding: ”Since 1698”

Designed by Stranger and Stranger, the new design represents the first bespoke spirits bottle in the company’s history and is inspired by the shop windows in its St James’s Street home. It will be used across the entire Berry Bros. & Rudd spirits portfolio, with different levels of detail provided on the labels at different price ranges.

The Summer Release 2021 will be the first to use it when it is released in July. The rest of the range will follow.

Speaking on the new bottle and design, Guy Pratt, design director at Stranger and Stranger, said:

“The premises on St James’ in the heart of London’s West End is inextricably tied to the history of old London and the host of famous and extraordinary people who have passed through its doors.

“It was the famous arched windows of the facade that provided a way to express the merchant’s prodigious spirit credentials within the mould of the bottle itself; added to the base of the bottle they echo both the iconic facade and the scalloped decoration you might typically find on a heavy spirits glass. In this way we were able to celebrate the brand and the home it has occupied since 1698 in a single mark.

“For appreciators of fine spirits who unfortunately cannot visit the shop itself, Berry Bros. & Rudd has just brought the shop to you!”

The new communication campaign around the relaunch, ‘Since 1698’, will feature dramatised video and images of groups of friends enjoying a glass of whisky with Berry Bros. & Rudd spirits experts, all centered around the St James’s Street premises.

The company intends the campaign to grow brand appeal in markets outside the UK, such as Germany, China, and the US.

“We are delighted with the result and we feel this new platform is the perfect way to bring Berry Bros. & Rudd to life.

“Our aim was to showcase our trusted expertise and aspirational British style in a warm and friendly manner, welcoming friends of today, whilst respecting our veritable heritage.”

Berry Bros. & Rudd chairwoman, Lizzy Rudd, added: “I’m delighted that after over 300 years, we are opening another new chapter for our prestigious spirits range. The new packaging and advertising draws upon and respects our heritage, whilst celebrating who we are and what we stand for today.”

For more information, head over to the company’s official website.