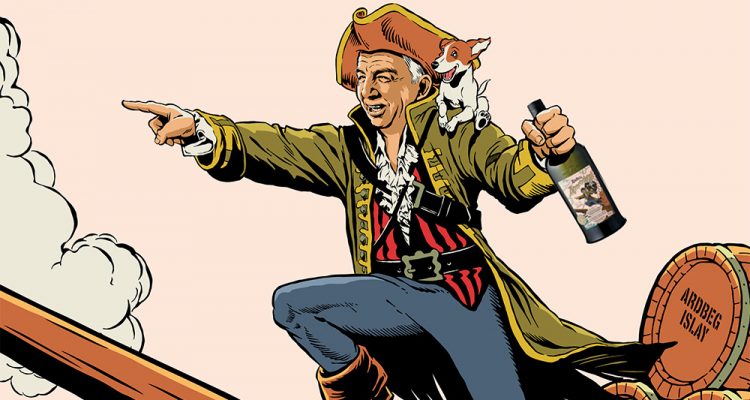 Ardbeg has unveiled its first Rye cask-matured Whisky to commemorate the retirement of distillery manager Mickey Heads, dubbed Arrrrrrrdbeg!. Heads began looking after the Islay distillery in 2007 and retired in late 2020 after 13 years.

Arrrrrrrdbeg! was exclusively aged in ey-Rye casks, a first for the distillery. The Scotch will be exclusively available to members of the Ardbeg Committee beginning February 1. The bottle design depicts Heads as a salty seadog and was created by Brazilian artist and graphic designer Butcher Billy.

“It was an absolute pleasure to spend the last 13 years heading the crew at the greatest distillery on earth,” commented Heads. “I had the best team of people anyone could wish for and I’m proud that we’ve been responsible for producing so many wonderful Ardbegs along the way.

“As for this bottling, well I’m honoured that a place that has already given me so much would celebrate my retirement in such a thoughtful way. And to have my image on a bottle, that’s a dream come true. Who knows what retirement holds for me, but I know I’ll be spending a lot of time out fishing. And, as ongoing chairman of the Ardbeg Committee, I’m sure I’ll be dropping by the distillery often.”

As part of the launch, Heads has also recorded a farewell tasting film and Q&A for fans to watch from home. There is also a downloadable kit with pirate props, which can be found on the distillery’s official website.

“Working with Mickey has been an absolute joy,” said Dr Bill Lumsden, director of whisky creation at Ardbeg. “He’s somebody with a genuine passion for Ardbeg and we hope that this bottling will take pride of place in his collection. He’s presided over many momentous Ardbegs over the years, but this ‘end of an era’ edition is a special one.

“The spirit inside is pretty special too: Arrrrrrrdbeg! is the distillery’s first ever ex-rye cask whisky. With notes of smoked banana and pear, sweet toffee and that distinctive Ardbeg smoke, it’s the perfectly peaty parting gift.”