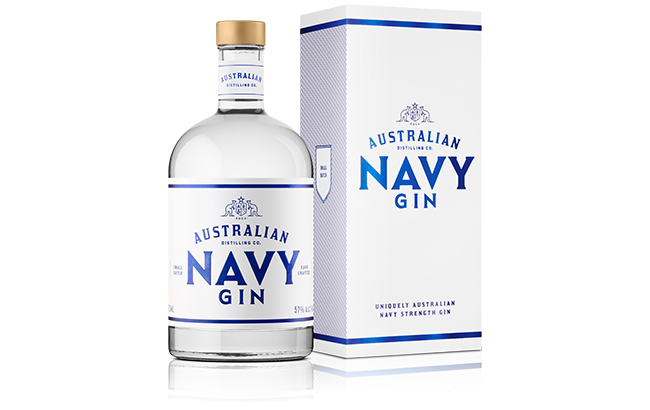 Promising notes of ‘woody spice’ and ‘earthy oak’, Australian Distilling Co’s latest gin is a navy strength variant bottled at 57% ABV, making it the strongest expression to be released by the producer.

“Our new Navy Gin is crafted with a nod to the colourful history of overproof gins from times gone by, when the British Royal Navy would allocate rations of spirits to their sailors, who would test its strength by dousing it with gunpowder to see if it would light.”

The company recommends pairing the spirit with Mediterranean tonic water and a cucumber garnish to balance the gin’s heat.

The new expression can be purchased for AU$94.99 (US$71.25) from the Australian Distilling Co website.

The producer recently opened a site in Adelaide, the first of a number of new distilleries planned for cities across the country.

In other Australian gin news, a London inspired gin garden has popped up in Sydney, and has been serving gin-infused sangria, rosé jugs and floral cocktails. Appearing at Endeavour Tap Room in the Rocks, the Gin Garden Pop Up will exist throughout the entire month of June and possibly longer.

In May, Australia’s most famous gin brand, Four Pillars released the 2021 edition of its iconic Bloody Shiraz Gin. Since its inaugural release in 2015, the purple gin has become one of the spirits world’s most highly anticipated annual offerings. Each year, Four Pillars takes local Shiraz fruit and steeps the whole berries in high-proof gin for eight weeks before pressing.

In April, Four Pillars and Qantas teamed up to release QF100 Gin to celebrate the airline’s centenary. Previously, the two Australian brands worked together on a series of cocktails to be served on flights.