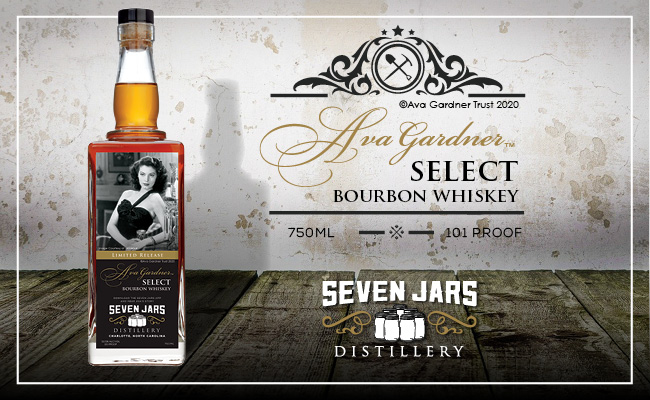 Celebrity spirits are reaching a new level. Ava Gardner Select Bourbon Whiskey is set to hit shelves this October as Seven Jars Distillery has partnered with the Ava Gardner™ Trust and Legacy Talent and Entertainment to produce the unique spirit.

Born on December 24, 1922 in Grabtown, North Carolina, Ava Gardner rose to international fame as an actress during a career that spanned over four decades.  Her role as Kitty Collins in the 1946 classic The Killers cemented her as the iconic symbol of the Film Noir era and her legacy as perhaps the most alluring starlet of Hollywood’s Golden Age endures to this day.

“I know that Ava is pleased to have her own whiskey,” said Ava Thompson,  Ava Gardner’s Great Niece and Trustee of the Ava Gardner Trust. “She always enjoyed top-shelf whiskey, and so our agents at Legacy Talent approached Seven Jars Distillery about a partnership. The result was not only a premium whiskey that deserves Ava’s brand, but a way for us to continue to bring amazing bourbon to Ava’s fans worldwide while creating a rare, keepsake memento at the same time.”

The bourbon bearing Gardner’s name will be released as a 101-proof whiskey on October 16th, 2020. The limited release of 3,600 bottles will be packaged in individual boxes, each bearing the image of Ava Gardner in the role of Kitty Collins from The Killers. Additional releases will be available in the future, with each bearing different images of Ava Gardner and each having a unique flavor profile.

“The opportunity to work with the brand of a Hollywood legend like Ava Gardner is a dream come true for us,” said Del Ratcliffe, Managing Partner of Seven Jars Distillery. “Our goal with Seven Jars Distillery has always been to tell the story of our parents, while sharing some really great spirits.  They both adored Ava Gardner, and the synergy between Ava’s story, her history, and our heritage here at Seven Jars is remarkable.”

“We are proud to represent a timeless icon like Ava Gardner and privileged to work with her heirs,” said Melinda Morris Zanoni, founder and CEO of Legacy Talent. “We are excited about this partnership, not only for Ava’s millions of fans, but also to present the Ava Gardner legacy to a new audience through our friends at Seven Jars, who have been incredible to work with throughout this entire collaboration!”

Distribution of the first release of the Ava Gardner Select Bourbon Whiskey will primarily be in North Carolina, but other markets will have limited availability. Those interested in obtaining one of the limited release bottles can find out more by visiting the official website.