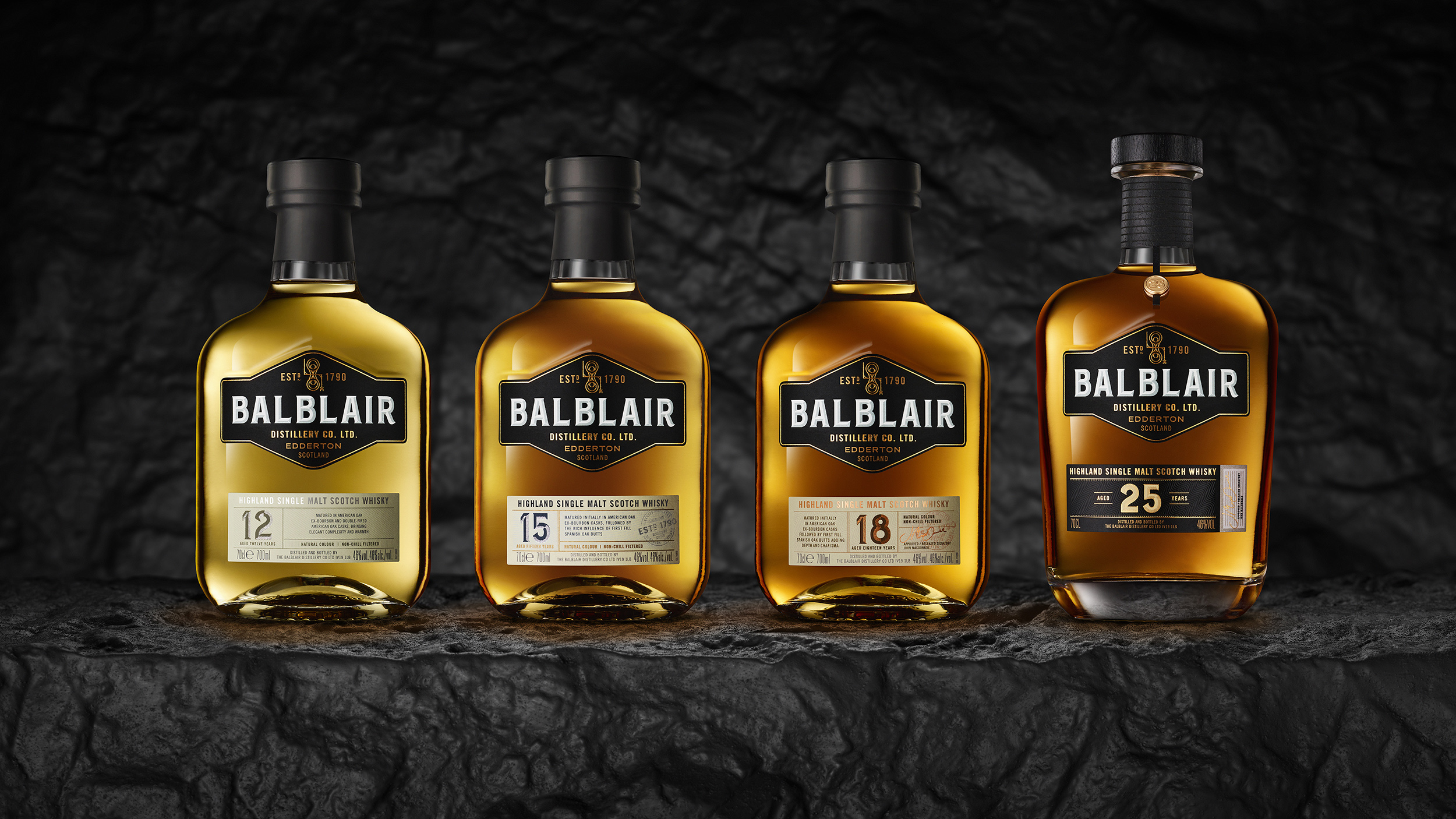 Over the past year or so, you may have noticed a “new” Scotch whisky brand named Balblair popping up in your local market, liquor store, or favorite e-commerce platform. There’s nothing new about the Highland brand, however, as it’s been distilling since 1790, as the bottle says, or long before as Distillery Manager John MacDonald tells me.

MacDonald has been at the helm of Balblair for 15 years now. A native Highlander, he was born in Inverness in 1966 and started his career at Glenmorangie where he spent 17 years. Today, he is a Keeper of the Quaich and one of the industry’s greatest champions. At 9 am on a Thursday, his quick wit and passion for the golden liquid he’s spent the majority of his life crafting and perfecting will have you drinking whisky a bit faster than you probably should at any time of day.

Scotland is home to over 130 whisky distilleries, but in the US, only a handful of bottles seem to be available at most spirit purchasing locations. Finding shelfspace and grabbing the attention of spirits fans can always be a challenge, especially when names like Macallan and Lagavulin dominate the visual spectrum. But recently, Balblair has been grabbing the attention of more explorative Scotch drinkers who are seeking a new adventure, and it deserves all of the accolades it has been receiving.

If you’re wondering why you haven’t heard of Balblair until recently, it could be because they just changed importers to Hotaling & Co—who brought brands like Nikka and Kavalan to the mainstream–or because until 2019 they used a vintage dating system that befuddled most Americans and Brits by forcing us to do math. Still, the liquid has always been known as some of the Highland’s best and most elegant.

“There’s no difference in the whisky,” assures John. “That same quality of whisky is still inside those bottles and that’s the thing that has to be stressed. The packaging has changed quite dramatically, but as far as I’m concerned, it’s the liquid that excites me more than anything.”

It’s the liquid that excites us, too. Balblair takes an old school approach to whisky production and uses one of Scotch’s slower creation processes, making sure to extract as many flavors and aromas as possible. Balblair also happens to be quite small.

“We’re a very small distillery, only two stills, that’s all we have,” explains John. “You compare that to the likes of Glenmorangie, which has 12 stills, Macallan has 20-odd stills, so we are a very, very small distillery and we take things very slowly from start to finish. The malt we source locally comes from Inverness, so that’s as local as we can possibly get. When it comes in, we direct it through our mill, which is like 60 years old.

“When we mash, and we have a very small mash in comparison of 4.4 tons, it’s done very slowly. We take almost six and a half hours to mash 4.4 tons of malt. I know other distilleries, I’m not saying they’re right or they’re wrong, it’s just how they are, but it would be like 12 tons in under three hours. What we achieve here is when that wort is coming through the mash tun plates it’s very, very clear bright wort, the mash grade is so high the filtration, you know, is very, very dense, and very effective.”

Slow, traditional, elegant, those are the three words that first come to mind when thinking about John and Balblair’s process and the whisky that it bears.

The distillery uses traditional wooden washbacks, not stainless steel, which “gives an advantage to us because you have microflora living inside these wooden vessels, almost like a secondary fermentation so it’s a flavor advantage to us, plus we have long fermentations as well,” explains John. ““Distillation is no different from mashing, slow. First distillation is to five hours, the flow coming through the spirit’s safe is very gentle and very slow, over about three hours on spirit. But again, that’s important, if you drive your stills was very, very hard, and with lots of steam on, you know, you’ll lose all these really beautiful fruity esters.”

When not distilling, John’s great passions are music—he owns and plays six guitars and a mandolin—and riding his motorcycle through the Highlands. You can see clear connections between these and the way he approaches whisky. Dedication to craft and details as well as appreciation are at the heart of his approach.

You can see his passion directly translated into the Balblair 12 Year Old, the first whisky he was able to put his fingerprints on. “This one is very special to me, and always will be because this was the first spot where I could really put my name to and because I became manager in 2006, so yeah, I was in charge of this one from start to finish,” explains John.

“I think the 12 year old is an old style Balblair, a classic style Balblair, it’s never been further matured in Sherry or any other kind of oak,” says John. “So it has very much the characteristics of production, you know, the new mix spirit.” The 12 Year Old is only aged in ex-bourbon American oak barrels, and it is surprisingly smooth and approachable for its age. There’s no real burn and as John suggests, there are notes of lemon peel, green apples and a very creamy vanilla. Also expect some orange and a bit of spice.

The Balblair 15 Year Old, meanwhile, features some influence from first fill Spanish oak butts. It delivers aromas of leatherwood, honey, and gingerbread followed by juicy prunes and lemon peel. The palate bursts with chocolate and tropical fruit while carrying through more of that spice into a long, mellow finish with notes of vanilla and citrus.

The Balblair 18 Year Old is John’s actual favorite, “It’s my kind of whisky, it checks every box.” He adds, “Evenly balanced, and it’s so complex, nothing overpowers. It is so smooth, beautifully smooth.” This whisky spends 15 and a half years in American oak before finishing for an additional two and a half years in Spanish oak.

It has rich toffee and baked pears on the nose, which shine bright against an elegant backdrop of new leather. The palate presents a masterful balance of juicy apricots, seasoned oak and vanilla custard. The finish is long and warming with chords of fresh spices and raisins.

Finally, there’s the 25 Year Old, which is basically dessert in a glass. On the nose, expect indulgent overripe apricots and dark liquorice against polished oak and a touch of saddle wax. The palate is full-bodied with oily citrus, chocolate praline and a faint note of fresh tobacco leaf. The finish is warming with smooth chocolate and blood oranges. It is truly a delight to taste.

While the Balblair line of age expression whiskies may be new, the whisky contains all of the elegance of a brand that has been producing for well over two centuries. And lucky for most of us, we’re just getting a chance to try it for the first time.

Buy A Bottle For Yourself