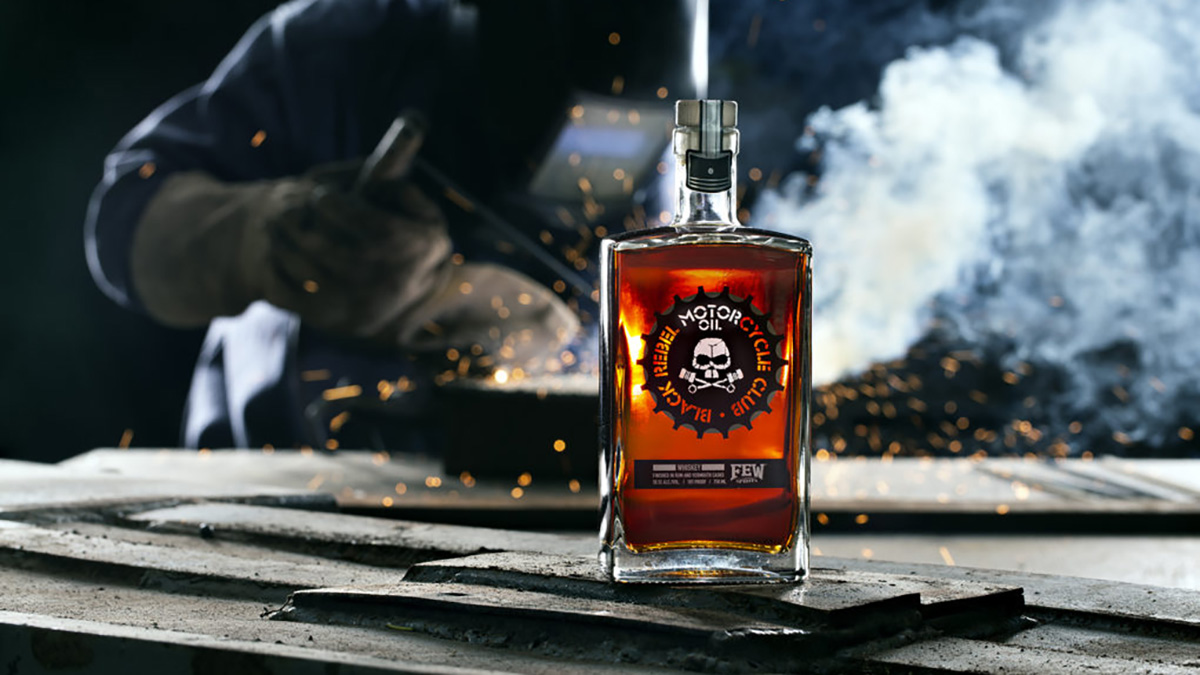 “I’ve been a fan of Black Rebel since the debut album came out,” said FEW Spirits Founder and Master Distiller Paul Hletko. “When we heard they were looking for a distillery to work with, you better believe we jumped at that chance.”

Black Rebel Motorcycle Club founding member and bassist Robert Levon Been added, “We’d always joke around about how someday we should make our own whiskey called ‘Motor Oil’ that’s so painful nobody would be able to actually drink it. It would basically be jet fuel in a bottle, just pure pain. But then we met Paul Hletko and he said, ‘Yeah that’s cool, but that’s illegal’. So after brooding for a bit, Paul took the next year to properly school us in how it’s really done, dialing in what somehow eventually became a legitimate incredible whiskey blend, which is crazy, and we’re still mostly surprised we didn’t blow up the barn.”

Featuring label art inspired by the band’s logo, every bottle of FEW Spirits Motor Oil Whiskey is a blend of three whiskeys: FEW Bourbon finished in rum barrels, bourbon finished in vermouth barrels, and a mesquite-smoked wheat whiskey. The result is full-flavored and complex – grassy and sweet from the rum barrel; herbaceous, bitter and vegetal notes from the vermouth barrel; and heavy mesquite smoke that evokes winding back roads, long stretches of highway, and pit stops at roadside barbecue joints of West Texas. The blend was proofed & bottled at a very rock n’ roll 101.

The two-year creative process involved sending samples to band members in points around the world, conducting blind tastings over video calls, tweaking flavor profiles based on band feedback, regrouping, and starting the process all over again until just the right blend was achieved.

Of the collaborative process, Hletko commented, “Creating a new whiskey is a lot like working a song – what are you trying to say? What do you want it to feel like? I was picturing riding on a motorcycle through backcountry roads and Route 66 – from one end of the ‘Mother Road’ in Chicago, to the California coast where the band began. But what does that sound like, and taste like, and what kind of feelings are evoked by that ride?”

Motor Oil is the latest in a series of acclaimed collaborations between FEW Spirits and world-famous music acts. In 2016, Hletko partnered with The Flaming Lips to create Brainville Rye Whiskey. Released in 2019, All Secrets Known was a limited-edition bourbon created with Alice In Chains.

Commented Levon Been, “This project went so far beyond anything we had in mind. I’m still pretty sure it can power your car, but it’s also a really great whiskey. So it’s like a win-win, and I defy anyone to prove that to be untrue. The tasting part – Don’t actually put this in your car. That’s on you, don’t do that.”

In addition to the launch of Motor Oil, Black Rebel Motorcycle Club recently announced a slate of summer US shows in support of The Cult. The first show, in St. Paul, MN, will be July 8.

Motor Oil whiskey is scheduled to be available for purchase on July 1 for $60 per 750 ml bottle. All 1,800 bottles will be available exclusively through the brand’s official website.