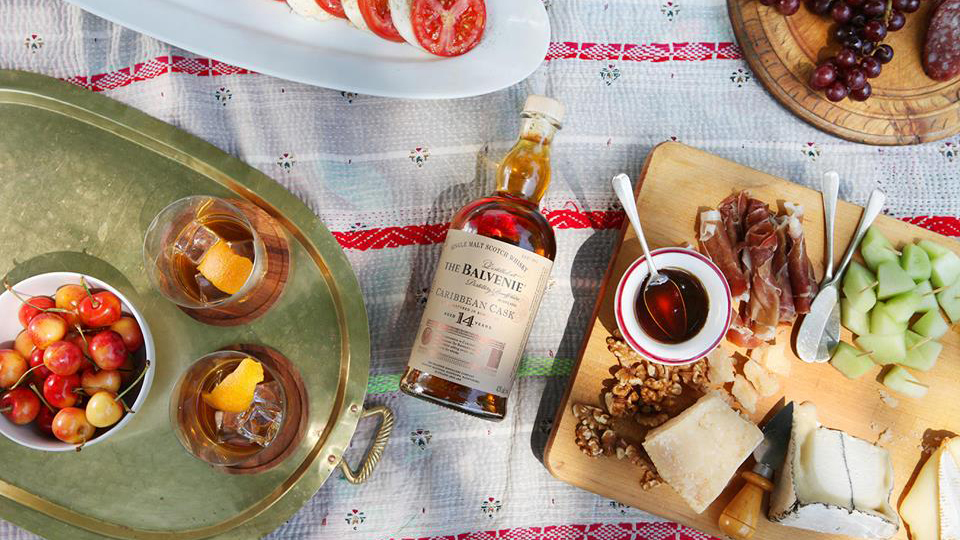 Whiskies finished in Sherry casks are common throughout Scotland these days, but you don’t run into Rum cask finished offerings anywhere near as much, especially when it comes to products that are part of major distilleries’ core ranges. The exception is The Balvenie Caribbean Cask 14 Years, the subject of this week’s Bottle Breakdown.

The Balvenie Malt Master David C. Stewart MBE invented two cask maturation in the 1980s, which we refer to today as “finishing.” The technique has affected Whiskies across the globe, and probably have their most meaningful impact at Stewart’s current home distillery.

Cigars and Rum naturally fit together. We think of Cuba, sandy beaches, and Panama hats. Scotch not so much. Stewart, however, was tasked with creating a Whisky and set out to make a dram that would pair well with the tobacco cylinder. The end result was The Balvenie Caribbean Cask 14 Years, which remains a core offering from the distillery, despite their having to make their own Rum just to make the Whisky.

We sat down with Neil Strachan, The Balvenie Brand Ambassador, to discuss the Caribbean Cask, its history, and what ties Scotland and the Caribbean together.

SZ: Just to get started. What was your first experience with The Balvenie? And how does that memory impact the way you view the Caribbean Cask 14 Year Old?

NS: In the North East of Scotland where I am from, the mention of The Balvenie Distillery to any whisky drinker brings a smile to their face. It is a local’s favorite and something that was my go to dram, years before the 14 Caribbean Cask was even launched. When it was launched, I knew it was going to be good, therefore I ordered three bottles for the bar that I ran and before I managed to try it at the end of the weekend, we had sold them all. So my first memory of the Caribbean Cask 14 is people partying on their summer holidays in a small village in Royal Deeside, Scotland.

SZ: What ingredients go into the 14 Year Old Whisky that is used in the Caribbean Cask and what makes them unique to the Balvenie?

NS:  The ingredients are the same in every Single Malt from Scotland, barley, water and yeast. It is how we process those ingredients into spirit and the marvelous spirit and oak alchemy that happens over the 14 years in our warehouse in Speyside, Scotland, that gives us the flavor to our whisky. Having The Balvenie’s “5 Rare Crafts” of homegrown barley, a traditional floor maltings, a coppersmith, a cooperage and the longest serving Malt Master in the industry bringing all that craftsmanship together in something we can drink makes any liquid from our distillery unique. We really feel that the difference between good and great whisky is the human eye and hand, which is why we celebrate our craftspeople at the distillery so much.

SZ: So there are Port finishes, Sherry finishes, Cognac finishes, but the Caribbean Cask 14 Year Old is finished in Rum casks. Can you tell us a little bit about the history behind the expression?

NS: David C. Stewart MBE, our Malt Master was challenged to come up with a whisky that worked with cigars. In Scotland where we do not have an embargo on Cuban produce, when cigars are mentioned Cuba is the first thought and then rum quickly comes to mind. He started experimenting. Before the Caribbean Cask 14 years old, we released 5 different rum cask finished Balvenie’s in different markets around the world. Limited quantities of these whiskies means they are now a hot commodity on whisky auction sites.

SZ: What is it about Rum barrels that makes them pair so well with Balvenie Whisky?

NS: The Balvenie produces a sweet malty spirit off the stills and with rum made of sugarcane juice or molasses there is already some natural synergies. Our aged house style of honey and vanilla, something not uncommon in rums, which we have in abundance after 14 years in ex-bourbon barrels. With a short finishing process in barrels seasoned with rum, these will elevate the sweet notes to rich caramels and toffees with a nose of tropical fruits.

SZ: Even with Master Distiller and inventor of wood finishing David Stewart at the helm, it’s rare to see a Rum barrel finished Whisky as part of a core lineup. What makes it such a definitive offering that it remains a signature Whisky for the Balvenie?

NS: The whisky is just really good and maintains our house style but with a twist, like any good finish should do. Winning awards like the IWSC Best Single Malt 15 years and below, a category that all distilleries play, in shows the quality, but it is how it has converted so many people’s perception of Single Malt that were once linked to a smoky, often harsh spirit to something that can be light, tropical and elegant. I am often told by customers that this whisky is what started their journey into enjoying Scotch.

SZ: What is the process that is gone through in sourcing the rum barrels? Is there a particular type of Rum that is in there before or one that comes from a particular place?

NS: We do not source the rum barrels. The problem with using casks from rum distilleries is getting enough of a consistent product to bottle such a popular whisky. This is why rum finishes are usually left to limited runs.

We buy a blend of rum that is produced to our specifications to season re-fil American oak casks. This rum is added to these casks and aged for 6 months for seasoning the oak. Then emptied and then 14 year Balvenie whisky is filled into these casks for a 9 month period of finishing before bottling.

SZ: What does the Balvenie use to fire the barrel interiors before putting in the 14 Year Old Whisky?

NS: We fill the rum into old refill American oak casks and you could think of them as a blank canvas for the rum as previous fills of whisky has stripped out a lot of the oaks flavors from the wood. These casks will have to be refreshed before the rum enters them. This will be done, possibly by shaving the inside of the cask and definitely revegetating the oak with heat in the form of a gas flame, which will open up the oak allowing the rum to interact deeper into each stave.

Different cask types will be treated differently. Some with a hot direct gas flame putting a charring on the cask or a toasting using a more gentle oak wood fire. Having our own Cooperage helps us be very specific on how we treat our casks before we fill them, which makes such a difference to the end products as 70% of the flavor is derived from the years of maturation in oak casks.

SZ: The Caribbean Cask 14 Year Old manages to deliver a distinct liquid that is reminiscent of two very disparate places. Thinking about the image of Northern-ish Scotland and tropical islands, what is the similarity between the two and how does the Balvenie manage to impart those ideas in the Whisky?

NS: Similarities between the two that come to mind are beautiful sandy beaches and we both get battered by storms at certain times of the year. Most people enjoying the beaches will be dressed slightly differently in the Caribbean than the Highlands of Scotland unless they are brave or just crazy. I am sure they are better connections but for me the short finishing in rum casks evokes memories of holidays and warm climates, so up in Scotland this smooth sipper is what we are looking for on those cold Scottish nights, which is perfect as we move into Fall here in the US.

SZ: Clearly the Whisky is a monument to perfecting the wood finishing process. But how does it influence creativity in the rest of the Balvenie’s ranges of Whiskies?

NS: David Stewart, MBE our Malt Master works on the basis that every bottle that we release should have our house style at the heart of it and is true from a 12 year old to our 50 year old bottlings. The finishes that he uses are to add complexity to that. With the 14 Caribbean Cask being a relatively newer proposition in comparison to the 12 Doublewood and 21 Portwood expressions I would say it is a product of their influence.

Maybe in the future we will release other whiskies that utilize the flavors found in rum barrels but only time will tell.

SZ: How do you recommend enjoying Balvenie Caribbean Cask 14 Year Old and what should be paired with it?

NS: Like all whisky, I think it is best enjoyed with good company. When you enjoy this whisky either neat, over ice, with a dash of water to release more flavors or with soda in a Highball form please remember it has been carefully handcrafted by the team at the distillery for your enjoyment so all we ask is you take some time now and again to appreciate the time that went into making the liquid.

Pairing wise this is a very versatile whisky and works well with delicate fish dishes but my personal favorite is with a cut of pork that has a high fat content such as the belly. I love how the alcohol cuts through the fat and the tropical fruit notes of pineapple pair classically with pork. Looking back in history and really why we have this whisky is because of cigars and if you do like a cigar you will not be disappointed having the Caribbean Cask 14 years old alongside your favorite smoke.

Get the subject of this week’s Bottle Breakdown, The Balvenie Caribbean Cask 14 Years, delivered to your door by heading to Drizly.