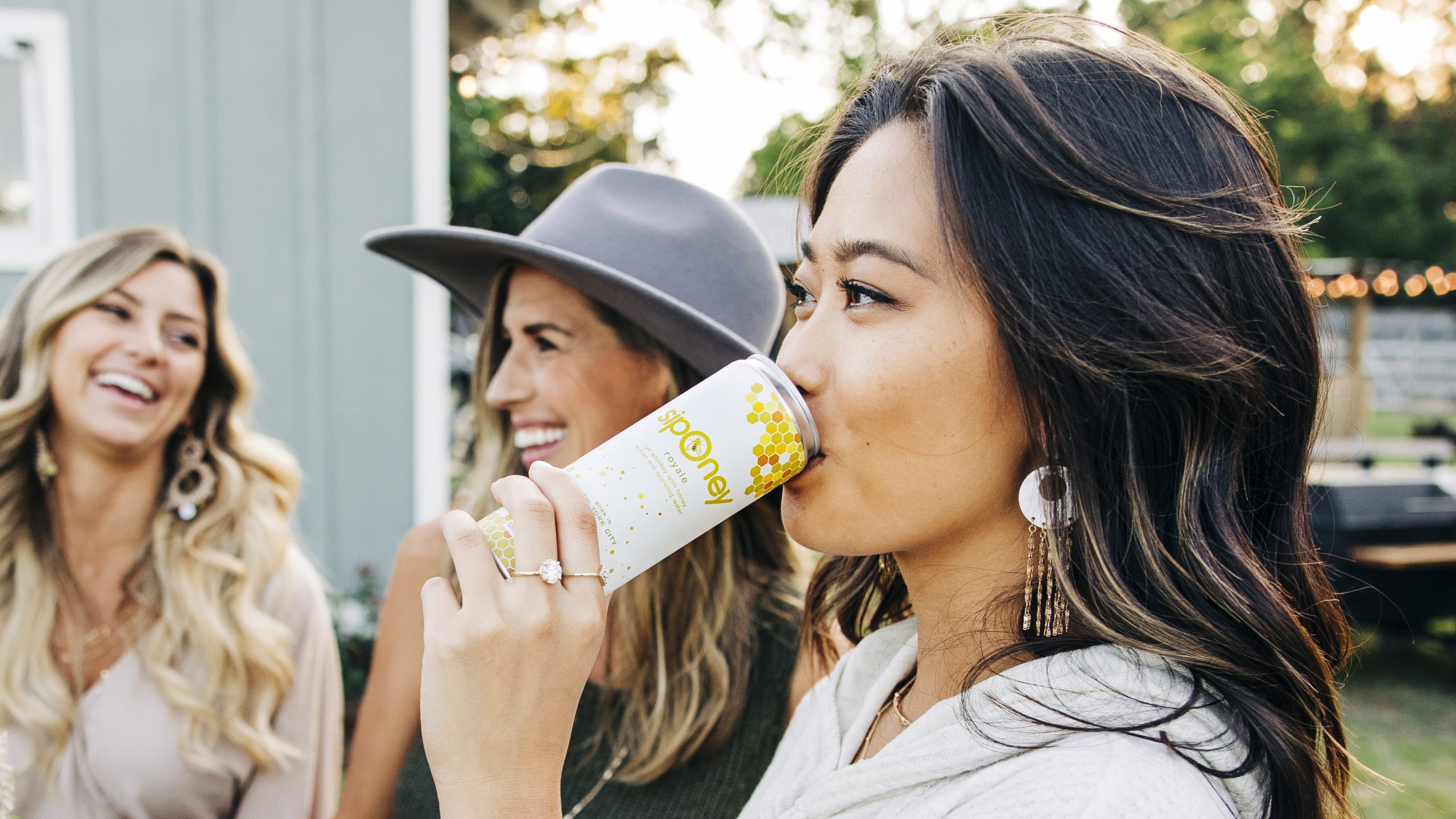 Bottle Breakdown: New York, Honey Bees, And The Importance Of Quality Ingredients, A Look Inside Siponey

In less than a year, Siponey has gone from its first run to one of the most talked about canned cocktails in the United States. The New York-based brand separates itself with its choice of ingredients–lemon, honey, and Rye Whiskey–which are at the center of its ethos, and most recently added Siponey Cafe to their lineup.

Started by New York City natives Amanda Victoria and Joseph Mintz, Siponey sources its three base ingredients from its home state, minimizing shipping impact and allowing insight into the creation process from its base level. Siponey is the only canned cocktail brand to use an aged Rye Whiskey as its spirit base, which might sound crazy to some, but the use of the refined spirit helps separate it from the pack.

In this week’s Bottle Breakdown, we sat down with horticulturist Joseph Mintz to discuss Siponey, the importance of quality ingredients, the challenges of growing a brand, and the significance of giving back.

Just to get started Canned cocktails are soaring right now, but what brought you to the category in the first place?

The world of canned cocktails is highly competitive with tons of new brands launching all the time. However, it’s difficult to find quality canned cocktails that aren’t filled with artificial flavors, otherwise known as “natural flavoring”. The majority of canned cocktails use a lower-quality malt liquor base to cut costs and drive profit margins and are often packed with processed sugars or worse, GMO corn or grain ingredients. Flavor houses are commissioned to scale formulas for mass production, and often are coming from the world of mass-produced sodas where it is common to fill cans with cheap and synthetic ingredients. Thus, many canned cocktails you see on the market today have an overall artificial or “fake” candied taste and terrible aftertaste. We believe consumers deserve better. We use real and top-notch ingredients such as aged rye whiskey, lemon juice and wildflower honey.

How did you come up with the idea for Siponey? Can you tell us about the moment you knew you had to go off in this direction?

The idea for Siponey started in 2019. Amanda had led the successful launch of multiple spirits brands and I wanted to know why she hadn’t ever had a stake in a brand of her own. I kept bugging her to do something, a whiskey, or some kind of bottled spirit. I had no idea of the three-tier distribution system or how difficult it is to start a liquor brand in America. While she was 6 months pregnant bobbing in a neighbor’s pool, they had bought some RTDs over. She didn’t drink it, but just from the smell of it she knew it was poorly made and that we could do better. Three months later our baby Mila was born. Three months after that, we did our first run of Siponey, on Valentine’s Day, February 2020.

New York Rye Whiskey is the base of Siponey canned cocktails. Where do you source yours from and why did you decide to make Rye your base?

We use a 4-year-old rye whiskey made and produced in New York State with locally-sourced NY grains. We decided to use rye as our base because of the spice that balances the honey and lemon juice. Think of rye bread versus white or even wheat bread – we wanted the whiskey to have a flavor complexity outright to serve as the backbone of flavor to Siponey. Siponey Royale is conceptualized from a classic whiskey highball and inspired by the contemporary classic cocktail, the Gold Rush, also born in New York City. Although the Gold Rush uses bourbon, isn’t carbonated and uses different specs, Amanda loves whiskey and was inspired by substituting honey for the white processed sugar that many classic cocktail recipes call for. There are no other canned cocktails that use an aged rye whiskey. Some call us crazy for putting such a refined spirit in a can, but in doing so we’re hoping to redefine cans as a more quality offering.

Siponey sources all of its ingredients from New York. How does that make Siponey different and what does it do to the overall flavor profile?

Both myself and Amanda are from New York City. We wanted to stay true to our roots and minimize shipping impact by using all local ingredients. Our wildflower honey is sourced from honeybee farmers in upstate New York and our lemon juice provider is based in upstate New York, as well. We couldn’t find any lemon farmers in New York, but our provider is local to the area.

Take us through the creation process. How does this transform from Rye Whiskey, honey, and lemon into a can of Siponey?

Unlike most other canned cocktail companies, we did not outsource our formulation process to a flavor house. We created our formula at home. Amanda has worked at many well-regarded cocktail bars in New York City and knows how to make an exquisite and perfectly balanced cocktail. The idea of reaching out to a flavor factory never crossed our mind. We went through hundreds of rye and honey samples to find the correct ones that match the flavor profile we were looking for. The difference in using quality, whole ingredients, versus flavoring is immediately noticeable from the first sip to the last drop. Siponey drinks like a glass of Brut Champagne (dry, floral and bubbly). Other than considering it a highball in a can, it also can simply be described as a “whiskey spritz”, as Siponey Royale is 7.25% ABV and Siponey Café is 5% ABV. They are perfectly carbonated, light and refreshing,

You have just released Siponey Cafe. Why did you decide to release a cold brew variety next?

Siponey Café is our first line extension. When we were first testing samples of rye whiskey, we were also playing with other potential recipes. We always knew that we would be using rye whiskey, honey and lemon juice as a base for all Siponey flavors. We found that a touch of cold brew coffee offers a warming spice in contrast to the rye whiskey, compared to the lightness of the Royale. Royale is a bit more of a summer drink while Café is wonderful in the colder months (of course, both can be enjoyed in any season!). The addition of cold brew coffee in Siponey Café is similar to the way bitters is used in an Old-Fashioned cocktail. The cold brew in the Café is not overpowering – it simply accentuates the whiskey, lemon juice and honey in a way that also adds a little pep in your step! A must-try for coffee and whiskey lovers, alike.

Where do you source your coffee from and how is it work into the production process?

We use a medium roast cold brew blend with beans from Nicaragua. I had lived in San Juan Del Sur, Nicaragua and was very excited to use a blend that had a personal connection to Nicaragua for me. The coffee was brewed at our production facility the night before we blended and canned the remainder of the ingredients for optimum freshness.

The RTD category has grown 43% this year, but the competition is only growing more crowded. What sets Siponey apart?

As far as we know it to be, Siponey is the most premium RTD available currently. There is no competition for quality and taste in terms of the passion in our individual ingredients. Siponey is the only RTD that tastes like it could’ve been made by a bartender and served to you fresh.

What do you see ahead for 2021 as the world, hopefully, begins to open back up and people start returning to their old habits?

Fingers crossed 2021 will be a better world! It’s been heartbreaking how many bars and restaurants have closed or are struggling to survive. Iconic locales have shut their doors for good. We want to continue to support the business of bars, restaurants, clubs, airlines etc. as they reopen and increase capacity. Having a Siponey Royale in the sky while traveling to the tropics sounds like heaven to me.

The challenges of growing a brand are immense. How have you managed to grow from a small New York beverage company to one that receives attention on the national stage?

The challenges of growing a brand never ends! We appreciate any and all attention and love we receive. We’ve reached out to every person we know, and then every person they know to get the word of Siponey around. In the pandemic world, it has been extra hard to educate people on why they should spend a couple of extra dollars on a quality RTD. I think because we use premium ingredients and share a portion of profits with honeybee activists around the country, it has helped bring more attention to our brand and story. We consider sharing our success the right thing to do as a business.

Honey is an intricate part of the Siponey project. Can you tell us a bit about the brand’s relationship with honeybees and why they are so important to Siponey?

Siponey has identified the support of honeybees as the first step in recovering the environment. Honeybees are vital to the survival of humans. Without honeybees, plants would not be able to pollinate. Siponey recognizes the importance of honeybees by giving back a portion of our profits to not-for-profit bee organizations across the country. We plan on expanding our giveback further by offering starter kits for at-home beekeeping enthusiasts. We believe what will help honeybees thrive the most would be diversity in bee colonies. If more people had colonies, the world would be a better place.

Next up for Siponey, will be a continued expansion into new markets. We are opening up more states with distributor partners every day and will be expanding into Canada and the EU in 2021.