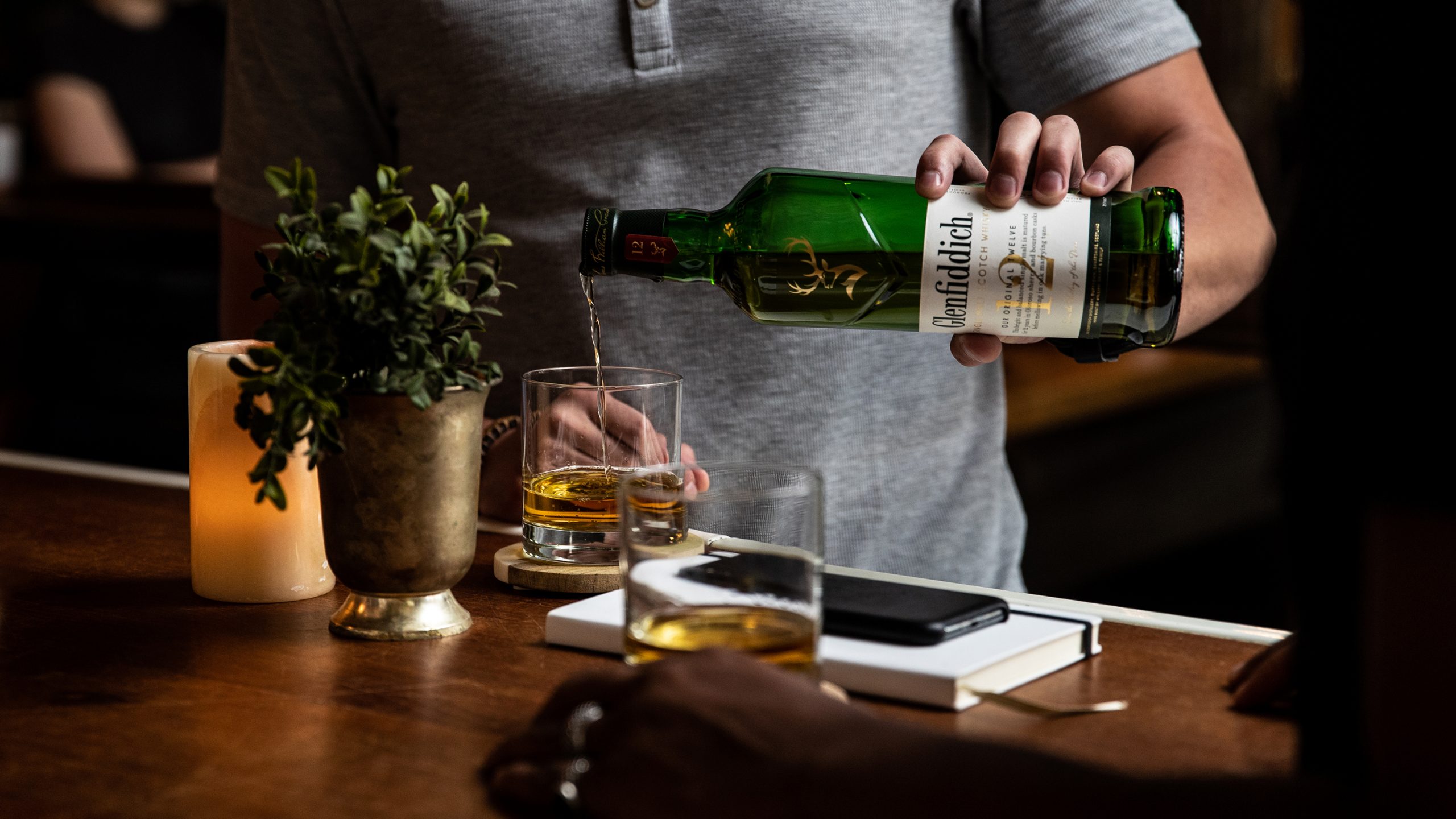 Glenfiddich 12 Year Old essentially defined the Single Malt Whisky category and its signature style remains the basis point from which all other Whiskies are judged. Back in 1963, the iconic Speyside distillery launched the single malt category when it exported its Glenfiddich single malt to the United States. Back then, it didn’t even have an age statement. Fast forward almost 60 years later, and the brand’s 12 Year is now the most awarded single malt Whisky of all time. Today, the Glenfiddich 12 Year Old is the focus of our Bottle Breakdown.

From the water, the stills, and the years of memorable celebrations that come to mind when the bottle is mentioned, it’s clear that Glenfiddich 12 Year Old remains the standard when it comes to single malts. We sat down with Glenfiddich Brand Ambassador, Allan Roth, to dive deeper into the iconic Whisky that revolutionized the category.

SZ: Just to get started. What was your first experience with Glenfiddich 12 Year Old? And how does that memory sit in your mind when you taste the Whiskey today?

AR: I’ve probably been drinking Glenfiddich 12 Year for as long as I’ve been drinking whisky!  The first moment that it brings me back to now was a birthday dinner with an old friend almost 20 years ago! Any time I drink Glenfiddich it will bring me back to a time like this when there were celebrations to be had.

SZ: Glenfiddich 12 Year Old is the distillery’s signature expression and Glenfiddich effectively created the single malt category. Can you take us through a little bit of the history surrounding the original release of the 12 Year Old?

AR: What we now think of as the Glenfiddich 12 Year, our flagship, is really the great-great grandchild of the Glenfiddich single malt that we first exported outside of Scotland, to the US, launching the single malt category back in 1963.  I don’t think I’m going out on too much of a limb by saying that Single Malt Scotch Whiskies are generally considered the greatest whiskies in the world, so it’s mind-blowing to think that 60 years ago people didn’t know that the “single” in the name meant that all of the whisky had been made at one distillery and that “malt” meant that it was all made from malted barley – but they couldn’t.  We hadn’t defined the category yet.  In fact, the first Glenfiddich expression didn’t carry an age statement and it was called a “straight malt.”  Over time, we’ve seen generations of drinkers discover Single Malt Scotch Whisky through Glenfiddich.

SZ: What ingredients go into the 12 Year Old and what makes them unique to Glenfiddich?

AR: Some of the greatest magic in the making of a whisky category as diverse as Single Malt Scotch Whisky is that almost all of it, and I mean the vast majority, starts with the same three ingredients: water, barley, and yeast.  In fact, almost every distillery will use the same barley and yeast.  Despite this, almost no two distilleries produce Single Malts that are alike.  At Glenfiddich our unique flavors can, in part, be traced back to the Robbie Dhu Spring, an underground water source of incredible purity.  Every drop of water that touches Glenfiddich from the initial malting on to the final bottling will only ever come from the Robbie Dhu Spring.  Beyond this, the distilling knowledge that’s accrued over 5 generations of family stewardship as well as having an on site cooperage to ensure that only the highest quality oak casks are used ensure that Glenfiddich maintains a flavor profile with notes of fresh pear, lemon zest, and a creamy, spiced sweetness.

SZ: Terroir is incredibly important to Whisky, but seems to be under discussed. Glenfiddich means “Valley of the Deer,” which is where the Whisky is made along the River Fiddich. Tell us about the land around the distillery and how the environment imparts itself into the aromas and flavors found in the 12 Year Old?

AR: The topic of terroir is one that’s hotly debated in the whisky community with arguments for and against its existence.  One thing that’s clear – and we’ve seen this tested time and time again – it’s impossible to replicate one distillery’s style even if you use the same exact barley or even steal away a distillery manager!  As you mentioned, Glenfiddich is not far from the River Fiddich and we have our own particular version of the cool, rainy climate that Speyside is known for.  This allows our whisky to have a particularly gentle experience aging, giving the casks the ability to impart the creamy sweetness and spice characteristics I mentioned above while still allowing the gentler fruity esters responsible for the pear notes – notes that were created way back during the fermentation stage – to be preserved for decades in the cask.

SZ: The Robbie Dhu spring is essential to Glenfiddich, so much so that back in the day William Grant bought more land around it than he could afford. What role does the stream play in today’s creation of the Whisky?

AR: The Robbie Dhu is incredibly essential to the making of Glenfiddich—so much so that the family that founded and owns the distillery has purchased additional land to protect the water source.  Any water that will ever touch an ingredient that will become Glenfdidich will come from the Robbie Dhu Spring and nowhere else. This water has been filtered through a long journey through the Conval Hills and is incredibly pure. This is essential to maintaining the distinctly bright flavors in Glenfiddich.

SZ: Take us through your stills. How big are they and what percentage of the run do you use? When it comes to process, how is Glenfiddich unique?

AR: The set up of our stills is fairly unique for a single malt distillery.  Our stills, effectively, work in triads with one wash still (9500 liters) feeding two differently shaped spirit stills (5900 liters each).  One of the two has a lamp glass shaped neck while the other has a boil bulb shaped neck. These distinct shapes each impact reflux within the stills differently and each creates different characteristics that Glenfiddich is known for. The hearts run, the part that becomes our new make spirits, represents a little over 15% of the full run, taking 2 and a half to 3 hours.

SZ: How does the “high cut point” create the Whisky’s distinctive fruitiness?

AR: The high, narrow cut point that Glenfiddich is known for doesn’t create the fruity character so much as it preserves them. These flavors are created during the last day of our 72 hour long fermentation.  The trick then is to identify the point in the distillation process where they live.  For us that’s early in the run where the fruit characteristics are most pronounced and the overall flavors are purest.

SZ: The 12 Year Old is matured in a mix of American oak and European oak Sherry casks. Why do you use multiple casks? And how does it influence the Whisky?

AR: The short answer is complexity. American oak is known for flavors such as vanilla, brown sugar and even coconut, while European oak is known from rich, dark, dried and cooked fruits, molasses, and winter spices. By drawing from both types we are able to create a more complex whisky. At Glenfiddich using American oak casks allows us to feature our distillery character front and center, while European oak casks often provide additional structure or complexity depending on what our Malt Master, Brian Kinsman, is looking for in the expression that he’s working on.

SZ: Glenfiddich 12 Year Old is the world’s most awarded single malt Whisky. In your opinion, what is it that makes its popularity so enduring? And why is it so popular with judges?

AR: Simply stated, Glenfiddich is one of the best made whiskies in the world. Care is taken at every step of the whisky making process to ensure that the finest ingredients are handled carefully so as to become the most nuanced and complex representation of Speyside Single Malt that they can.  In fact, Glenfiddich 12 Year is so well loved it defines the style. The bright notes of lemon zest sit on top of the sweeter, richer pear notes, which themselves rest on the spicy structure from a long rest in the oak casks. It all comes together with great balance.

SZ: Clearly the 12 Year Old is a monument to stability and perfecting process. But how does it influence creativity in the rest of Glenfiddich’s range of Whiskies?

SZ: How do you recommend enjoying Glenfiddich 12 and what should be paired with it?

AR: For me it all depends on the moment. Right now, it’s 90 degrees in LA so I’m drinking my 12 Year on the rocks or in a whisky sour. When the temperature drops into the 70s I’ll be taking mine neat – possibly with a splash of water.  As for pairings, I really enjoy Glenfiddich with sushi. The synergies are endless.

Is there anything else you would have liked to learn from our Bottle Breakdown of Glenfiddich 12 Year Old? Let us know in the comments.