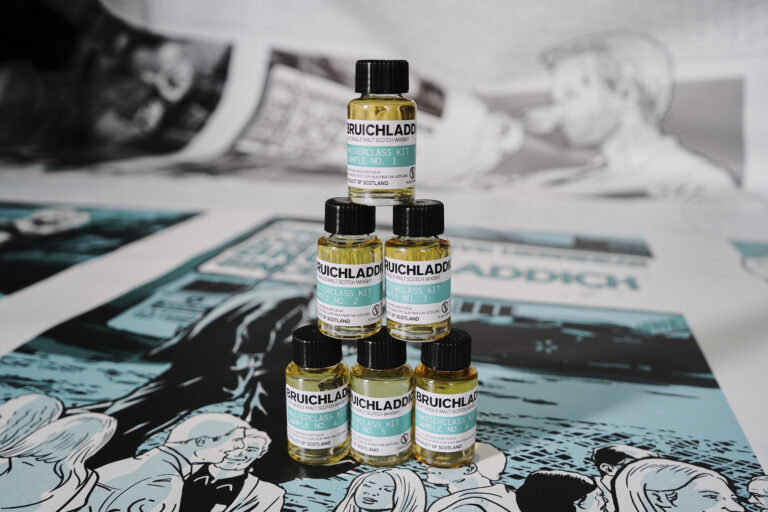 Among the anniversary highlights being marked during the virtual Feir Ile celebrations on 30th May 2021 are: -140 Years since the distillery was built and first opened -20th Anniversary of Bruichladdich Distillery’s reopening and – first year anniversary of B Corp certification.

It has been twenty years since Bruichladdich Distillery’s gates reopened, with ambitions of resurrection. Muck was cleared away, walls were redecorated, roofs were fixed, stills were polished and fresh enthusiasm were injected. A long-neglected community poured into the heart and eventual home off the operation’s unique spirits.

The early years were invested in convincing an industry that terroir in spirits existed; that barley, people and Islay mattered. Organically grown barley was added to the distillation schedule, quickly followed by Islay raised and the ancient landrace, Bere.

An old warehouse was converted into a bottling hall and jobs were created for youngsters who would have otherwise moved off the island. Slowly but surely, a community-oriented business rose from the ashes, with principled founders at the helm driving their passion for provenance and transparency forward. More farmers, hauliers, and contractors would join the efforts as the whisky industry began to boom.

The last decade saw biodynamic barley distilled for the first time, bolstered by investment from new owners Remy Cointreau, a Regional Trials experiment kicked off and the status of Islay’s largest private employer earned. Most recently, Bruichladdich have nurtured a renewed appreciation for whisky as an agriculture product involving relationships built with grain breeders and soil experts, and the purchase of 30 acres of croft land intended for R&D purposes. Fresh sights on growing sustainably have been set, with projects underway to decarbonise distillation by 2025, a One Tin Lighter initiative offered to reduce outer packaging, and continued investment in conservation and biodiversity both locally and in partnership with the Botanic Gardens Conservation International.

To cap off a successful decade, Bruichladdich Distillery was awarded B Corp certification in 2020. Focussing on people and planet, they are one of a handful of distilleries worldwide to achieve this accolade, firmly marking their commitment to using business asa force for good.To celebrate these anniversaries large and small, Bruichladdich has planned a programme including an interactive whisky masterclass, music and live action from the island. With a plethora of events, there’s something for the casual cocktail drinker to the most devout malt aficionado.

Speaking on events, co-founder of the business, Simon Coughlin said:

“‘I can’t believe it’s been so long’ or ‘time flies’… often heard phrases such as these aren’t true when it comes to the Bruichladdich journey. We’ve never had a moment to stop and think or look back. We’ve been on this crusade, focused with such intent to change the way our industry looks at single malt. We’ve been so determined to turn it into something more than just the liquid in the bottle, that pausing to consider where we have come from seems an indulgence. There is still so much to do.

“Having said that, and in all honesty, the Bruichladdich Fèis Ìle day is the one single day of the year I enjoy the most. It’s aday to stop and enjoy a few hours with our supports and friends from around the world. Enjoying a B+T and a dram in the sun, listening to great music and sharing stories with so many Laddie fans really does make you think, we may have struck on something here! Seeing our local community in the courtyard having a bloody good time is just so special. It makes me incredibly proud and it’s a very emotional day and it takes an incredible team to pull it off. We so look forward to 2022 when we can hopefully welcome everyone back into our courtyard for another great celebration.

”Save the Date in your diary for the 30th of May 2021 and keep an eye [email protected] social channel for full details of how to get involved.