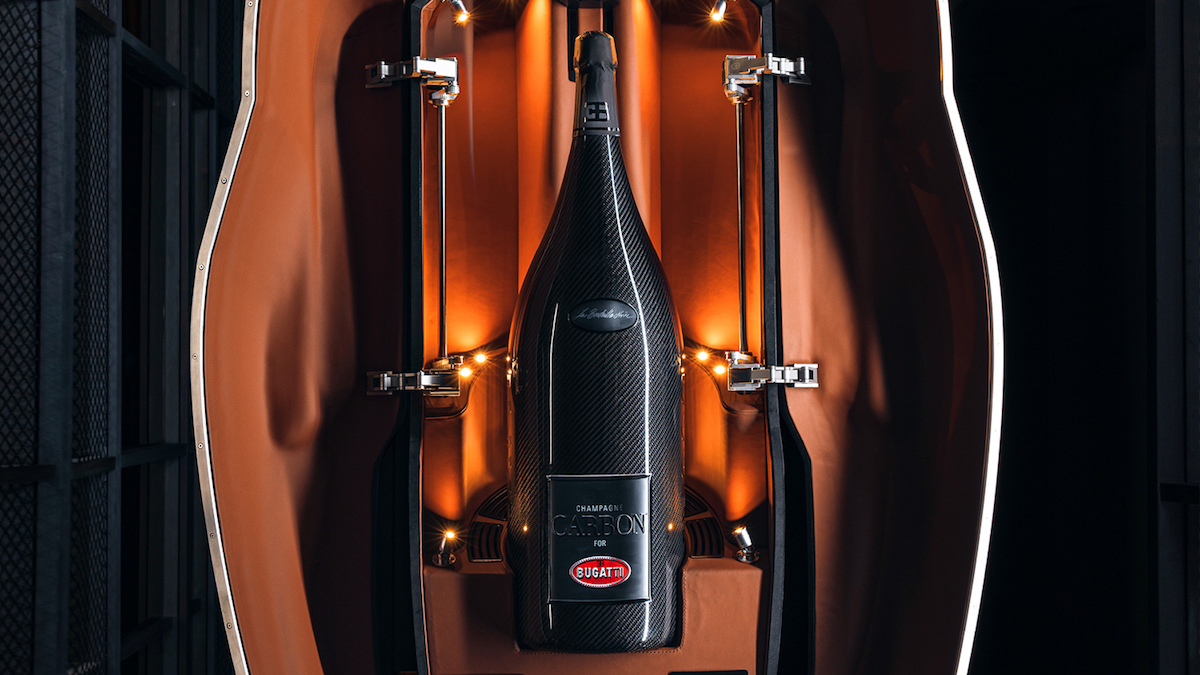 Bugatti and Champagne Carbon have come together to unveil La Bouteille Noire. The two companies have worked in partnership since 2018, both hailing from the Grand Est region in France and each dedicated to translating the knowledge and expertise gathered over their proud histories into an innovative present and future.

The first manifestation of the Bugatti and Champagne Carbon partnership was the launch of ‘ƎB.01’, a Champagne consisting of 90% Chardonnay and 10% Pinot Noir. Only grapes from the most distinguished terroirs of Champagne were used from a 2002 vintage; the year which saw Bugatti working at full speed on its modern era revival and the Veyron, while the Grand Est region had perfect weather conditions for good ripeness and Champagne flavor concentration.

Now, Bugatti and Champagne Carbon – inspired by the haute couture creation of Bugatti’s La Voiture Noire – reveal the most spectacular, hand-crafted champagne bottle and case in the world: the one-of-one, La Bouteille Noire.

A 15-liter carbon fiber bottle, itself the result of 150 hours of craftsmanship involving 37 steps, nestles securely within a sculptural case, which draws inspiration from La Voiture Noire and the flowing elegance of the Type 57 SC Atlantic. With pure surfaces and clean lines, the visual flow of the hand-crafted case is entirely uninterrupted, except by the ultrafine fiber structure hidden beneath the deep glossy black surface.

The case itself is a masterpiece, featuring 314 individual sheets of prepreg carbon fiber, exactly like the materials used in Bugatti’s line-up of advanced hyper sports cars. The cutting-edge technology within includes an automatic solid-state thermodynamic cooling cell – normally found in orbiting satellites – together with 14 high-end fans circulating cool air within the case.

La Bouteille Noire sits upon an illuminated vivid red base, which itself is a miniature recasting of La Voiture Noire’s elegant rear light – one flowing lit panel, with no joints. It’s recreated here by a block of sanded acrylic glass, illuminated in red LEDs, incorporating the jewel-like letters of BUGATTI over a surface of brushed natural aluminum.

The case opens and closes at the push of a stainless-steel button, bathed in a gentle blue light. The doors themselves are trimmed with a piece of laser cut aluminum, mimicking the central fin of the Type 57SC Atlantic, and open with technical hinges and a bespoke transmission to reveal a sumptuous interior. As the doors gently unfold, another automatic system releases the neck of the bottle, which is secured while closed.

Fine Havana Brown grain leather lines the interior – just as it does in La Voiture Noire – which is gently illuminated by aluminum-encased LED lights, creating a theatrical display that rightly places the bottle, and its contents, at the fore.

“With a creation as spectacular as ‘La Bouteille Noire’ it was only right that we pair it with one of our most spectacular vintages,” said Alexandre Mea, CEO, Champagne Carbon. “On this occasion, we have chosen a 2000 Vintage blend of 60% Chardonnay and 40% Pinot Noir. Celebrating the beginning of a new millennium, the year 2000 was marked by a relatively mild winter followed by a succession of summer temperatures throughout the flowering period. It’s characterized by rich notes of vegetables, pepper and white fruits – the result of the finest Grands Crus that the Champagne vineyards offer us. Each one brings its own surprises to magnify this cuvee.”

The case is the work of Bugatti partner IXO, master craftsmen in carbon fibre, transforming everyday components into works of art through an intense passion and an unwavering dedication to the finest materials. Most recently Bugatti and IXO revealed the Bugatti Pool Table: a masterpiece designed with perfect proportions and crafted with advanced technologies.

Wiebke Stahl, Managing Director at Bugatti International, comments: “At Bugatti we have always believed that our creations are not just cars, they are works of art, delivered with perfection in every detail. Champagne Carbon and IXO apply the same ethos to their work; La Bouteille Noire is the ultimate expression of design, attention-to-detail and craftsmanship in the world of champagne”.

La Bouteille Noire was revealed at a private event The Londoner, London’s newest five-star hotel and the world’s first super-boutique residence. The exclusive restaurant, ‘8 at the Londoner, counts ƎB.01 as one of the most exclusive bottles of champagne in its wine cellar.

Until December 1st, the Bugatti ‘La Voiture Noire’ will be displayed within an illuminated glass box outside The Londoner in Leicester Square.

For more information, head over to Bugatti’s official website.