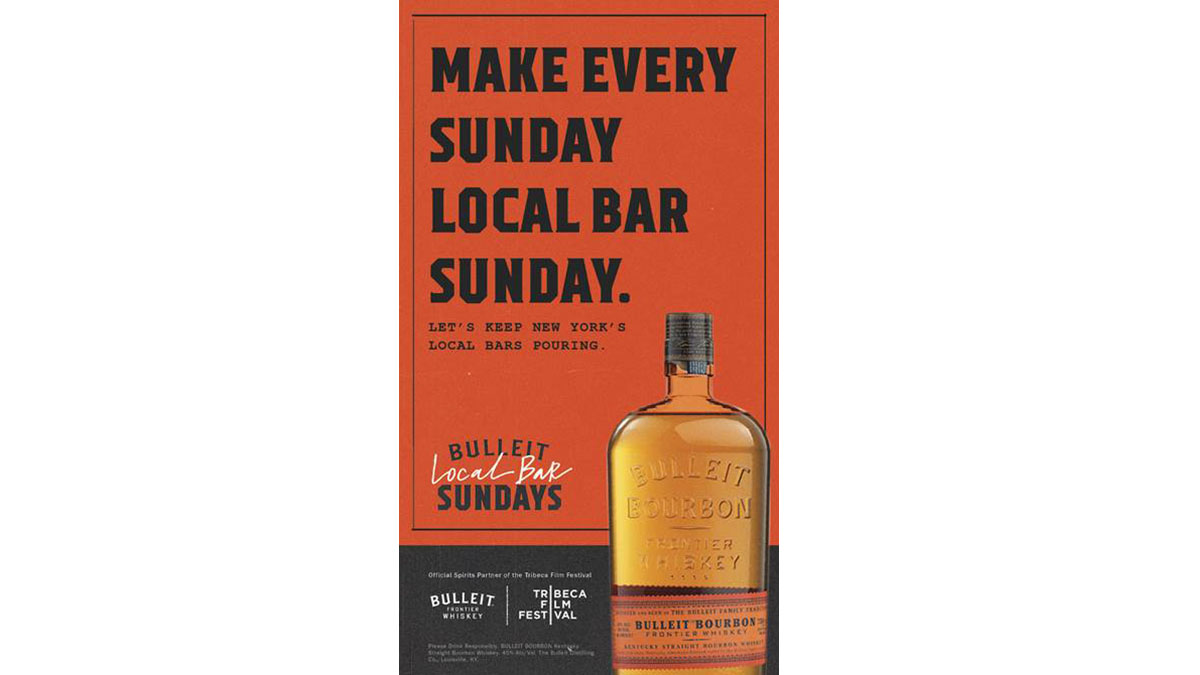 Bulleit has introduced “Local Bar Sundays” at this year’s Tribeca Festival, encouraging adults (21+) to make Sunday a Local Bar Sunday. New York City bars and restaurants have been the backdrop for some of life’s most important moments and some of the film industry’s most iconic scenes, and to help reignite the vibrance of New York’s hospitality landscape, Bulleit Frontier Whiskey and Tribeca Festival are teaming up to work towards their shared mission of bringing the New York Community together again.

From June 9 through June 20, consumers who visit their favorite local New York bar or restaurant during the Tribeca Festival will be reimbursed online for any Bulleit, Johnnie Walker, Crown Royal, Ketel One or Don Julio cocktail over $10 by participating in the “First Drink Is On Us” $50,000 virtual bar program. Consumers will be reimbursed $10 via Venmo for uploading a receipt to FirstsOnUs.com after purchasing a qualifying brand cocktail during the designated period. Participating consumers are encouraged to remember to tip their favorite bartenders.

“At the heart of every community is a gathering place – often in the form of a bar or restaurant,” said Sophie Kelly, Sr. Vice President of Whiskey at Diageo North America. “As a brand focused on building community, we’re thrilled to bring our Local Bar Sundays initiative to New York in partnership with Tribeca Festival to help reignite excitement and encourage folks to get back to their local establishments that they know and love.”

As part of the Local Bar Sundays and Tribeca Festival programming, Bulleit will also take over New York City with an out of home and social media campaign, encouraging consumers across the city to make every Sunday a Local Bar Sunday with the “first drink on us” when they head to their local bars.

“Partners like Bulleit make our mission of celebrating the resilient spirit of New York possible,” said Paula Weinstein, Chief Content Officer, Tribeca Enterprises. “We’re so proud to invite New Yorkers out of their homes and back to the movies and the unique local establishments that hold our community together.”

As the official Bourbon of Tribeca Festival, Bulleit will also have an on-site presence with a variety of touchpoints and activations including:

The Local Bar Sundays mission comes on the heels of the brand’s initial commitment of $250,000 to support the North American Hospitality Industry as part of the Bulleit Frontier Fund. This additional $50,000 pledge made by Bulleit Whiskey, Johnnie Walker, Crown Royal, Ketel One and Don Julio, Diageo brands, will continue to support industry recovery.