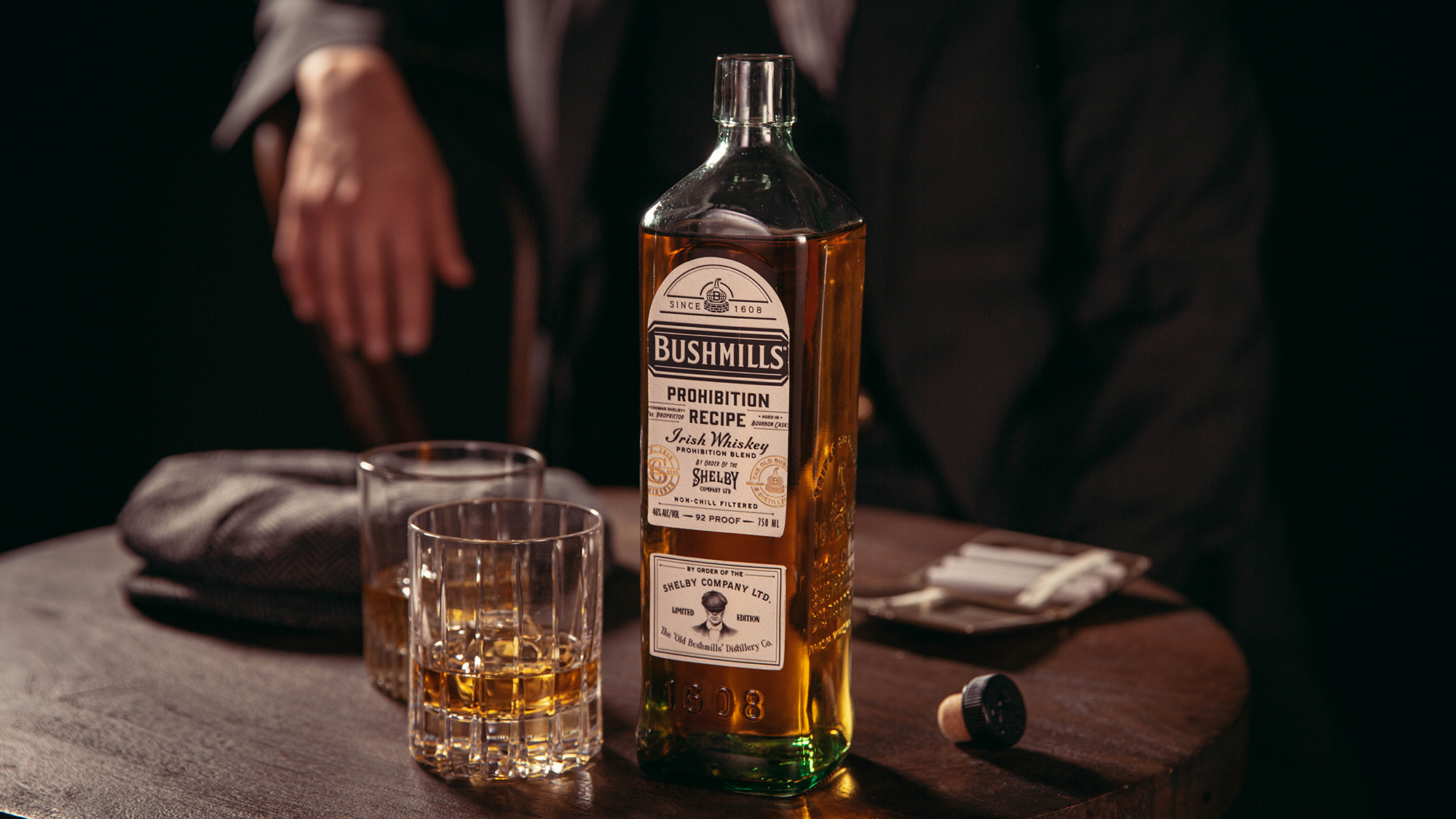 Debuting just ahead of the June 10th launch of the highly anticipated final season of the hit show  on Netflix in the US, Bushmills Prohibition Recipe looks to transport imbibers back one hundred years to the Shelby family’s Garrison pub. The limited release is a tribute to the infamous leader of the Peaky Blinders, Tommy Shelby, and his notorious family.

The bottle, a recreation of the vintage Bushmills Irish Whiskey bottle used as a prop within  several Peaky Blinders episodes, features design elements authentic to the 1920s era such as  a visible cork lid and blue-tinted glass. As a product of the Shelby Company Ltd., the label  showcases the family emblem alongside that of the 400-year-old distillery, which are positioned  above a sketch of Tommy Shelby. A quote, “whiskey is good proofing water, it tells you who’s real and who isn’t” adorns the back label.

“We couldn’t be more thrilled to have entered into such a fitting partnership between our show,  Peaky Blinders and Bushmills,” says Caryn Mandabach, producer and owner of Peaky Blinders.  “We are delighted the US fans can toast the launch of this historic, final season on Netflix with  this limited-edition partnership whiskey. In typical Shelby fashion, Tommy is making his mark on  the whiskey industry!”

The whiskey packs a punch with bold, intense flavors complemented by a decadent finish. Crafted by Master Distiller Colum Egan to reflect distilling practices that were utilized in the earlier days of whiskey-making, Bushmills Prohibition Recipe is high-proof, non-chill filtered and aged in ex-bourbon casks. For added complexity, Egan separately aged the stock for three, four and five years before blending together to achieve a 46% ABV expression that features flavors of rye bread, orange marmalade, almonds, and cinnamon, finishing long and full with zesty citrus oils and vanilla bean.

“With this new release, we celebrate Bushmills’ long history and the continued aging of whiskey  during Prohibition,” said Egan. “As the world’s oldest licensed whiskey  distillery and one of only a handful of distilleries to survive the 13 long years that preceded

repeal day, this whiskey represents uncompromised quality and perseverance in the face of  adversity – a story that is shared by both Bushmills and the Peaky Blinders.”

“This limited-edition release is a tribute to the shared stories of Bushmills and the Shelby Family  and the exhilarating time in history when the Peaky Blinders ruled the streets and Bushmills  ruled the bar,” said Ben Samek, President & Chief Operating Officer, Banijay Americas. “We’re  thrilled to be working with Bushmills to offer fans this delicious whiskey that will make them feel  like a Shelby family member.”

Bushmills Prohibition Recipe Irish Whiskey is currently available on ReserveBar and in wine and spirits retailers across the country for $29.99.

For more information about, head over to Bushmills’s official website.