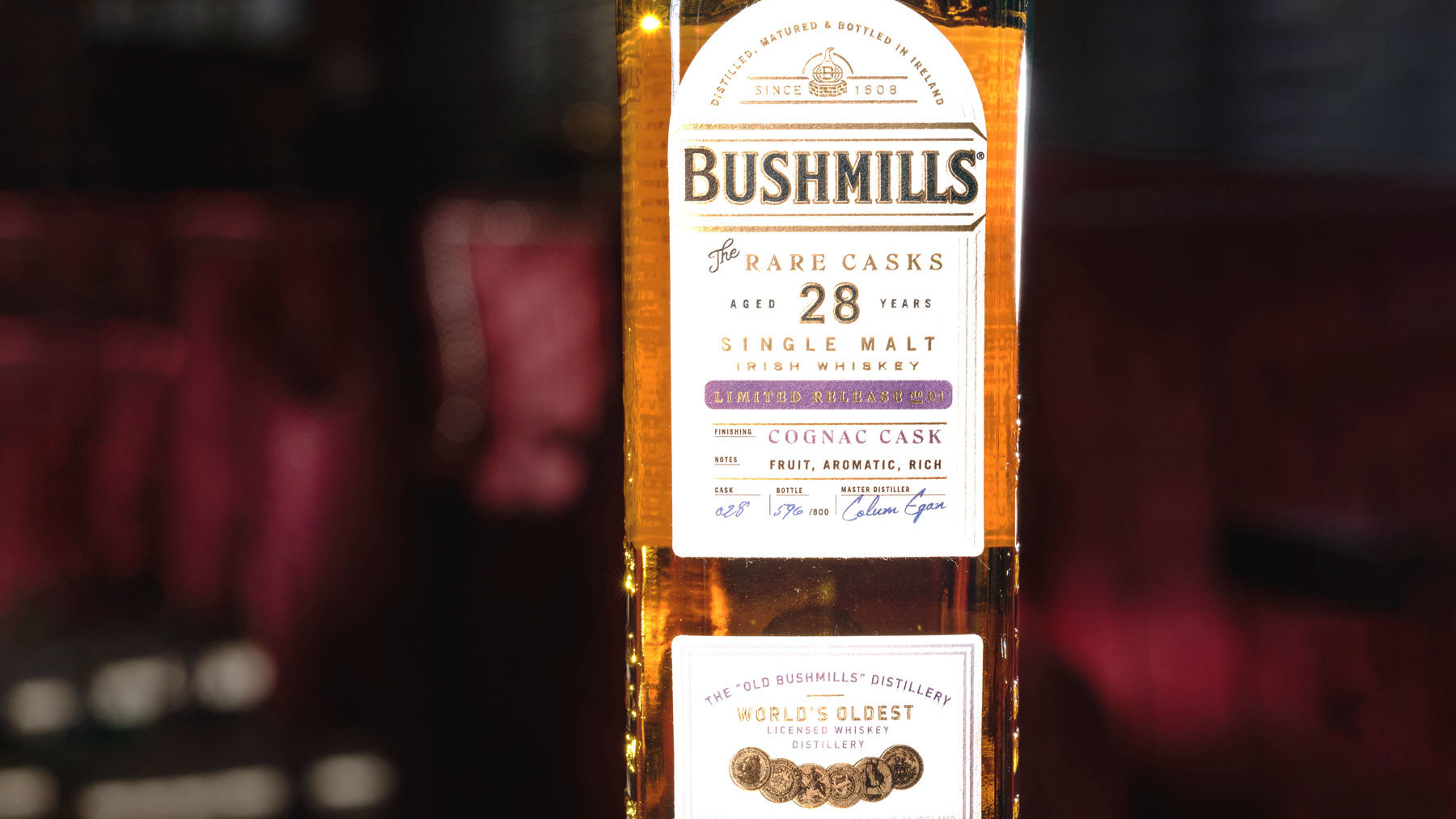 Bushmills 28 Year Old Single Malt Cognac Cask is crafted by Helen Mulholland, Irish whiskey’s first female Master Blender, who has kept a watchful eye over the single malt since its distillation in 1992. Made at the Old Bushmills Distillery along the rugged County Antrim coast of Ireland, the Whiskey uses a foundation of 100% unpeated malted barley and the spring water from the nearby River Bush. It is then triple distilled in small batches in traditional copper pot stills.

“At Bushmills, the foundation of our whiskey is the quality of ingredients and the experience and skill we have passed down through generations,” notes Mulholland. “Throughout my almost 30-year career at Bushmills, I have nurtured this special whiskey from its distillate, experimenting with different taste profiles and finally resting it in some of the world’s rarest and highest quality casks.

“Maturing this precious malt in former Cognac casks has brought out unique notes and characteristics specific to Cognac, developing the whiskey into something new and distinct for Bushmills, with bold intensity and subtle sweetness. Bushmills 28 Year Old Single Malt Cognac Cask is a time capsule of my career at the distillery, and one of the most complex and layered whiskeys ever released by us.”

Matured in former Bourbon and Oloroso Sherry barrels for 11 years, the single malt is then finished in ultra-rare Cognac casks for 17 years, each cask having been carefully sourced under the direction of Mulholland. On the nose, rounded sweet spicy wood aromas develop the deep dried fruit character, offering a hint of pear and almond followed by warm sweet vanilla and cinnamon undertones. The exceptionally long finish continues to develop as complex wood flavors linger on the palate.

“We are in the midst of an exciting Irish whiskey revival, where last year the category was the single fastest-growing segment overall for the U.S. spirits market,” says Lander Otegui, Senior Vice President of Marketing at Proximo Spirits. “The new annual series, ‘The Rare Casks,’ is a must for any collector looking to expand their whiskey repertoire, and discover the unique, smooth taste that sets Bushmills Irish Whiskey single malts apart from any Scotch single malt.

“Bushmills 28 Year Old Single Malt Cognac Cask and ‘The Rare Casks’ series is a fitting tribute to the world’s oldest licensed whiskey distillery, and we are excited to share this extremely rare piece of liquid history with whiskey fans across the United States.”

Less than 500 bottles of the 28 Year Old Single Malt Cognac Cask will be made available in the United States. Beginning October 1, 2020, they will be on sale for $500 USD at retailers and online at Flaviar.com.

Whiskey lovers are also invited to join the selection process for next year’s release in “The Rare Casks” series, with a never-before-tasted single malt whiskey collection available for members on Flaviar.com.