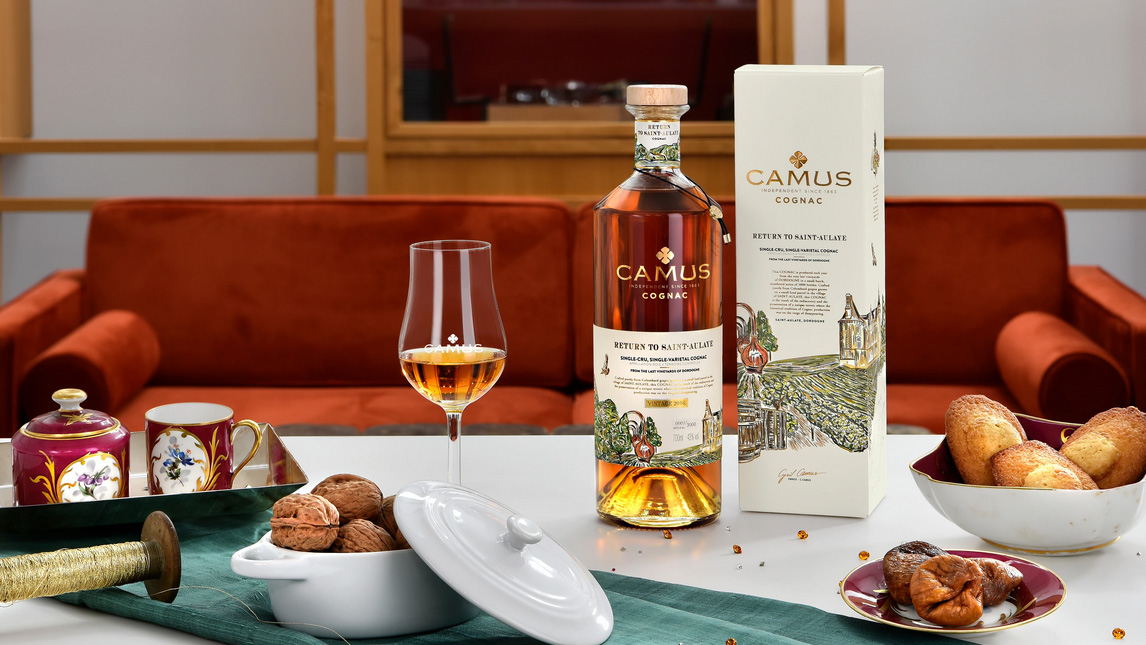 Over the last few years, Camus has set out to make innovative Cognacs by traditional means, and, in turn, push the boundaries of current conceptions around the French brandy category. The grand adventure began last year (or at least its first release came in 2020) with Camus Expedition Cognac, and this year, it rides again with Return to Saint-Aulaye.

“There’s a sort of common thread, which is about the research and development and a kind of research, which is not innovation for the sake of doing cool stuff,” explains Camus Global Brand Manager Pier Paolo Catucci. “It’s like going back to what used to be done in the past. It is what we call the science of tradition, it’s a revival of traditional practices. There’s a notion of preserving those practices, and by preserving those practices also preserving a sort of terroir.” In the case of Return to Saint-Aulaye, Camus is “keeping alive a way of doing Cognac, which was on the verge of disappearing.”

Simply, Return to Saint-Aulaye is a 2016 vintage Cognac made from Colombard grapes. In more interesting terms, it is the first Cognac to come out of the very last vineyards of Dordogne. It is a single-cru, single-varietal expression from an area known to many as Perigord, recognized for its gastronomic heritage, but lesser known as being part of the Cognac appellation.

The offering is the result of a collaboration between Camus and the Saint-Aulaye village council in France. The decades-long effort looks to rediscover and protect the region’s unique terroir, where Cognac production dates back to 1785. Unfortunately, by the early 1990s, Cognac production in Dordogne had reduced by more than 90%. In 1999, the Saint-Aulaye council decided to replant a small 1.5-hectare plot of Colombard grapes.

“The [overall Cognac] appellation is very wide. It’s a large portion of territory West of France. If you drive from North to South, East to West, the landscape changes dramatically, and, as you can imagine, also the soil. So, it is worthwhile to talk about the diversity of these areas,” explains Catucci. “Producers are concentrating on some specific crews like Petite Champagne, Grand Champagne because of the prestigious image, which is linked to those. When you go down South at the right border of the appellation, there’s Perigord.”

While Perigord is no longer a region of France, it now corresponds roughly to the Dordogne department, it remains a geographical indication for a series of products because of its rich gastronomic tradition. “It is the land of truffles, walnuts, and foie gras,” says Catucci who describes the landscape as something between Holland, France, and Italy. It’s picturesque and filled with well-preserved architecture, like ancient roman walls and bridges.

“When it comes to the production of Cognac, this land was very fertile,” he adds. All that changed in the seventies, however, which was bad for French agriculture overall. Compounded by wine’s continued growth in popularity and it being faster to market than cognac, along with other regions having more prestigious names, the Cognac industry in Dordogne/Perigord was on the verge of disappearing.

In the late 90s, the Mayor of Saint-Aulaye had the town go back and analyze the history of Cognac in the area. After scouring the town archives, they found that there had previously been vineyards by the Roman wall of the castle (which is now the city’s town hall), and they planted the area with Colombard grapes–which happen to be the least popular, but most aromatic type of grapes used for Cognac production.

For the next step, Saint-Aulaye went to Camus, says Catucci. “At that time, we were taking a lot of steps forward in terms of distillation. We were some of the first doing real innovation. For example, we were the only one to produce a single provenance cognac from Île de Ré.” The town came to Camus and asked if they “could possibly create a Cognac, which expressed [the town’s] terroir?”

The Dordogne region is known for very aromatic wine, explains Catucci. “It’s not by mistake that in this area the production of dessert wines is very big because they produce these very mellow wines with high concentrations of esters. One big molecule that we find in big proportion in comparison to what we have in Cognac is acetate isoamyl, which is the base of banana aromas. And then when it goes into aging, it is the precursor of rancio, the main marker of Cognac… very old Cognac, that’s where it goes.”

In fact, Colombard grapes from Dordogne create wine that is so aromatic that Camus doesn’t conduct malolactic fermentation in order to preserve the intense aromas.

With Return to Saint-Aulaye cognac, Camus’ goal is to keep everything hyper local. This extends to the barrels used to age the liquid, which come from the Dobel forest. They didn’t want to alter the condition of the kind of Cognac you would have found in the region 50 or 60 years ago. It was even aged in the tower of the town’s castle, which happens to be particularly humid and resulted in a large angel’s share.

Surprisingly, this return to tradition is actually expanding what people currently expect from Cognac, and adding a bit of diversity to a category that has become a bit too one-note.

Catucci says Return to Saint-Aulaye makes a “very, very good after dinner or late afternoon Cognac,” and is best paired with a sweet dessert or something buttery and creamy. When it comes to drinking it, he suggests waiting four to five minutes after you pour it “just to take some fresh air and the oxygen.” Then start drinking it in small sips, then eat something before sipping again.

Overall, there is something warm, joyous, and even heroic about Camus’ endeavor. The brand is preserving a terroir that was almost lost to time, but not for the sake of prestige. Rather, the brand is returning diversity to the category.

In some way, it is a dram in the spirit of Don Quixote. There was a time when Quixotic meant the impractical pursuit of idealistic goals, and for those of us with more cynical predilections, that’s a negative point to what Camus has done here. In reality, however, Return to Saint-Aulaye finds Camus doing something noble, and in return managing to expand and enliven the entire category.

Get yourself a bottle HERE