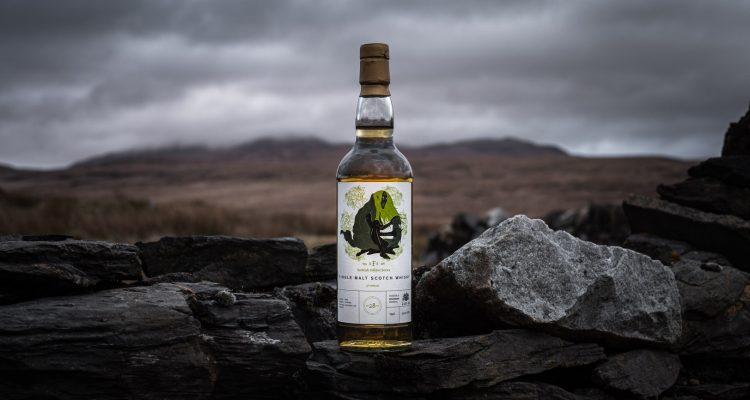 Cask 88 has unveiled Caointeach – The Keener in Green, as the fifth release in the Scottish Folklore Series. The penultimate offering in the fabled whisky collection is a 28-year-old Bowmore single malt.

The fifth release in the Scottish Folklore Series finds Cask 88 returning to Islay, this time via the Bowmore distillery. The Scotch is dubbed the Caointeach after an ancient Islay legend.

According to the brand, “Among the Sidhe, the ‘fairy folk’ of Scotland, you will find mysterious women much like the Irish Banshee. First, the Caoineag: harbingers of bad news all over the highlands and islands. If you hear one keening outside your home, this is an announcement that someone within will die soon. Caoineag mourn for the dead before they have passed.

“Around bodies and streams of fresh water, you may encounter Bean Nighe, green-clad washerwomen with webbed feet and just the one nostril. They perform solitary work, washing the clothes of those who are soon to die. Neither spirit can alter fate. They simply announce death, they do not cause it.

“On Islay, you must be doubly careful not to surprise a Caointeach. They are sidhe with the attributes of both Caoineag and Bean Nighe. Every clan is said to have its own attendant Caointeach, who may keen outside houses or wash the linens of those whose time has come. Less mild than her counterparts, a Caointeach hates to be interrupted at her work and may whip at the legs of interlopers with her wet laundry. There is magic and malice in her strike, because those who are hit may lose the use of their legs – or even have their legs drop off entirely. Show kindness to a Caointeach, however, and she will leave your family in peace: she knows that loudly predicting death is not necessarily a comfort to those who hear it.”

A single cask of 28 year old whisky distilled at Bowmore distillery was chosen to become the fifth release in the Cask 88 Scottish Folklore Series and represent the Caointeach of Islay. The whisky has spent all of its 28 years in an ex-bourbon hogshead. This classic approach to maturation allows Bowmore’s character to show through, emphasising the flavors that come from the fermentation and distillation process: a tropical fruitiness, floral notes, and that signature Bowmore peat.

On the nose, the lucky few who get to enjoy a draw will find that Bowmore’s signature smoke is beautifully balanced with burnt caramel, agave syrup, ground cinnamon, peanut oil, vanilla and heather honey. When it comes to the palat, a complex maze of flavors exists inside of a tropical smokehouse – candied papaya, dried mango, butterscotch, angelica root, white peppercorns and chilli roasted peanuts arrive on puffs of smoke, and swirl around each other. The finish features a mild orange peel flavor lingering on the tongue. Peat smoke after the long maturation is neither overwhelming nor lacking – it is as elegantly balanced as a ballerina. It has a fading smoky sweetness accompanied by gentle bitterness and savoury notes with a hint of rosemary.

The Cask 88 Scottish Folklore Series is a collection of six unique single cask expressions that each embody a different Scottish legend of old. This series of distinct bottles is designed to bond the stories of Scotland’s unique history with the very finest single malts.

The Scottish Folklore Series: Caointeach will be released publicly on May 7th, and pre-release reservations are now open exclusively to Cask 88 subscribers. It is priced at $533.38.

Head over to the official website to reserve a bottle.