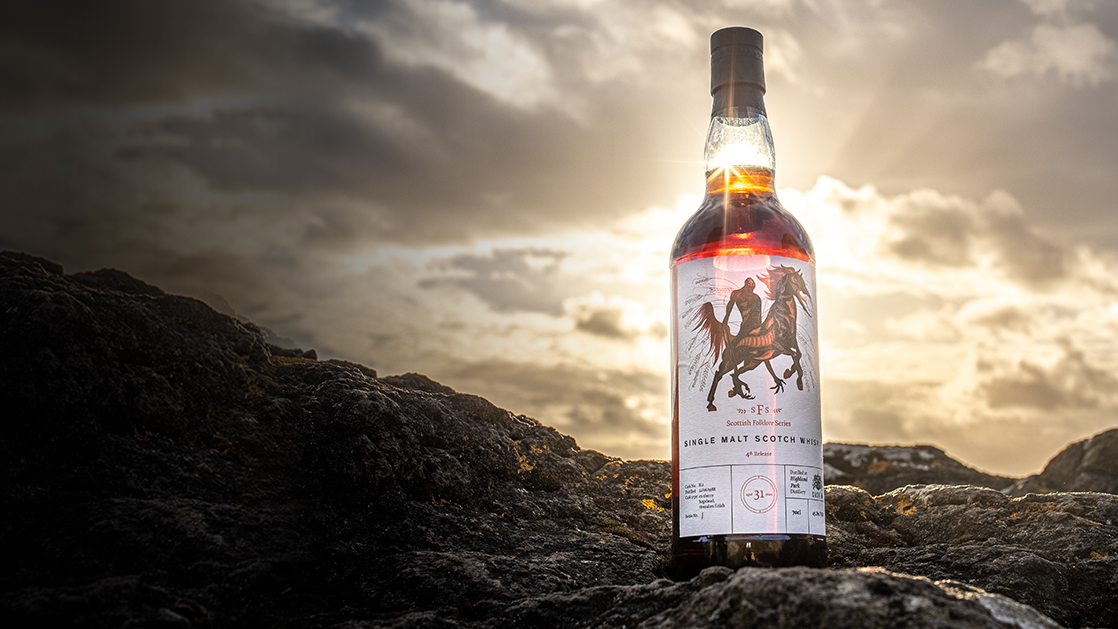 Cask 88 has unveiled the 4th Release from its Scottish Folklore Series, Nuckelavee – The Terror from the Northern Sea, a 31-year-old Highland Park Whisky. In total, the broker and independent bottler is set to release six unique single cask expressions as part of the collection.

The Cask 88 Scottish Folklore Series Nuckelavee hails from the Orkney Islands, which have been inhabited since the neolithic age, 8,500 years ago. Despite fertile land and fish-filled seas, life is not easy at 59⁰ north, where winters are long, cold, dark, and stormy.

Nuckelavee is the most terrifying supernatural force to threaten the archipelago. The Nuckelavee lives in the sea, confined during the daylight months by the Mither o’ the Sea whose power weakens as autumn arrives. It has the body of a horse, with skin flayed off, exposing crawling muscles and yellow veins that pump black blood. In its head blazes a single red eye, and from its gaping mouth issue vapours so pestilent, they cause crops to wilt and livestock to sicken and die. From a distance, Nuckelavee appears to have a rider, but up close it can be seen that a human torso erupts direct from the beast’s back, groaning and lolling from side to side as it drags grasping arms that reach all the way to the ground.

A single cask of 31 year old Whisky distilled at Highland Park distillery was chosen to become the fourth release in the Cask 88 Scottish Folklore Series and represent the brooding darkness of Nuckelavee. The Whisky was distilled on June 22, 1988 and started its life in a refill Sherry cask, and was then finished in a Rivesaltes fortified French wine hogshead. Rivesaltes is an Appellation d’Origine Contrôlée for naturally sweet, fortified wines made in the Languedoc-Roussillon wine region.

The darkness of this double cask matured Whisky is extraordinary, “only a few shades less black than the beast’s own malevolent sou”, says the distillery. 31 years of maturation in ex sherry and fortified wine casks has performed a profound and permanent transformation on the initially light and breezy Orkney spirit.

The intensity of this single cask Whisky is mighty indeed, and the distillery advises that you are fully prepared before you take a sip. Afterall, they wouldn’t like any of your more sensitive friends to be overwhelmed. In good news for them, in the stories of Nuckelavee it is explained that the deep sea creature despises sweetwater. If pursued by the beast, all you need to do is cross a stream of fresh water, and you will find safety as Nuckelavee will refuse to cross, lest its hooves make contact. Likewise, if this Whisky proves too much, a few drops of pure water will loosen its grip, and allow you to partially tame this wild spirit.

On the nose, the first whiff is perfumed and woody, like camphor and sandalwood. The almondy essence of Amaretto follows, but drier. As you get closer, however, sweeter notes of dried prunes and freeze-dried strawberries lurk.

The palate begins with sweetness: a thick layer of marzipan icing and raspberry jam, slowly peeled away from a fruitcake. A hint of smoke rolls in, like a roast dinner charring in another room. Then the sweetness changes, becoming more savoury like Mexican candies. Tamarind candy with a soft dusting of salt and chilli powder, followed by a cinnamon red-hot.

The finish is, unsurprisingly, long. Depending on where you focus your attention you may find sweetness, savour, smoke, spice or a soupcon of sea salt. Enjoy it: it’ll be different after the next sip.

The fourth release in the Scottish Folklore series continues the tradition of artistic interpretations of each mythical creature that are unlike any other seen before. This time, however, Cask 88 created something truly monstrous. While Cù-Sìth, Selkie and Cailleach Beira were all creatures of supernatural beauty, tempered by some sinister power, Nuckelavee is a grotesque beast to its core. The image of Nuckelavee on the bottle is an incredibly stylish depiction of horror. It’s dark, organic and terrifying – a tribute, we hope, to one of the most sinister beasts in Scottish folklore.

Bottled at 45.80% ABV on January 8, 2020, the extremely limited-edition Cask 88 Scottish Folklore Series: Nuckelavee is on sale for $1,262.65 and can be purchased via the independent bottler’s official website.

In July, Cask 88 chose a 19-Year-Old Laphroaig 2001 Single Malt as the third release in its Scottish Folklore Series, which it named Cailleach Beira, the Queen of Winter.