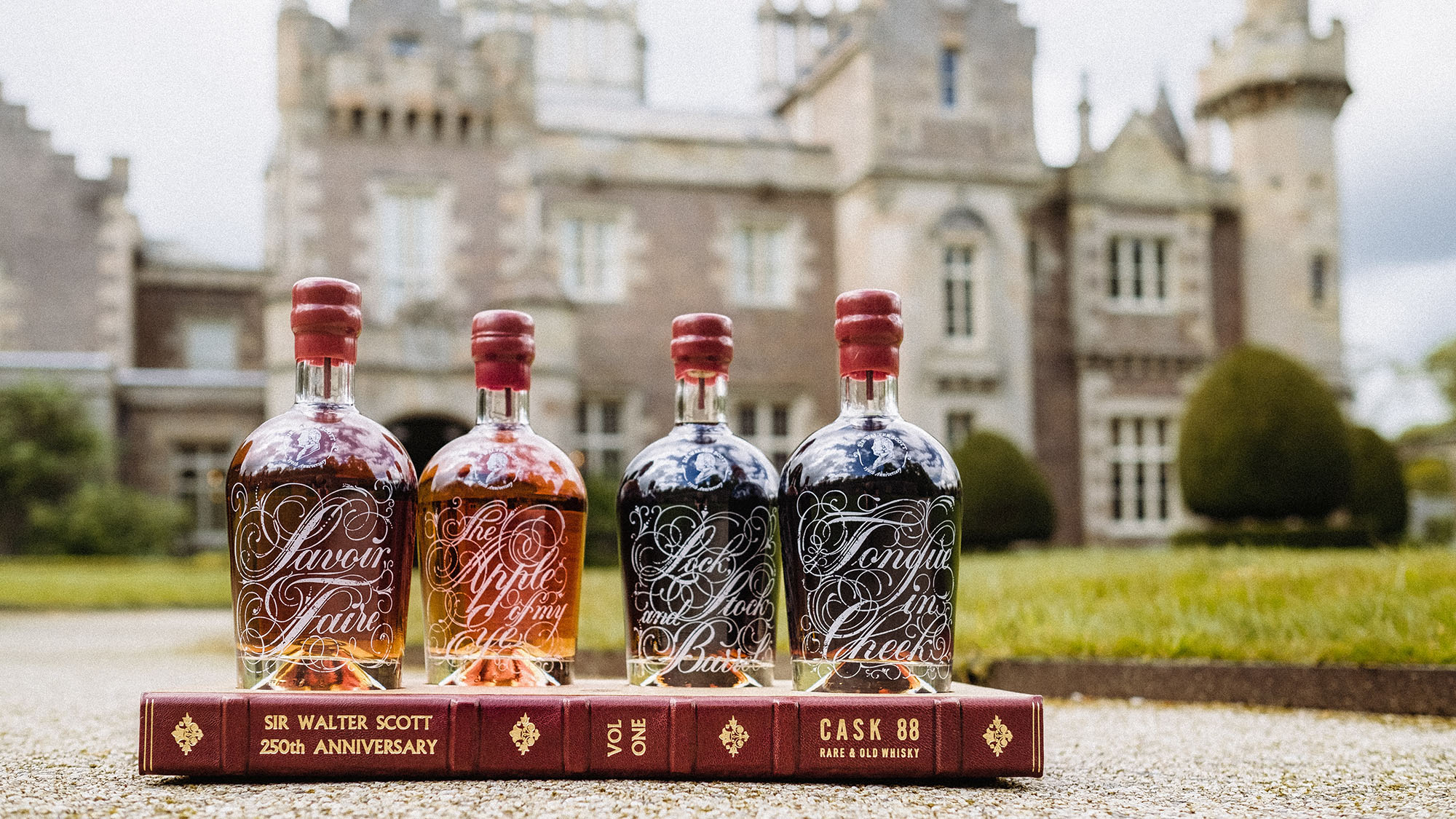 Cask 88 is releasing an exclusive, collector’s edition set of 19-year-old, single-malt, Ben Nevis whisky to celebrate the 250th birthday of Sir Walter Scott. Further, the collection of single cask whisky also observes Visit Scotland’s ‘Year of Stories’ in which Scottish inspired, created or written stories are being celebrated and showcased.

The four bottle set will be available for general sale on May 27 and includes a handmade, bespoke whisky board which appears as a leather bound book. Each of the whiskies have been finished in different casks and are adorned with famous phrases which Scott popularized through his writing; ‘Savoir Faire’, ‘Apple of my Eye’, ‘Lock, Stock and Barrel’ and ‘Tongue in Cheek’. Cask 88’s Whisky Manager James Zorab selected an ex-bourbon hogshead of Ben Nevis distilled in December 2001 and split the contents into four smaller casks; Oloroso Octave (Lock, Stock and Barrel – 51.6% ABV), Red Wine Firkin (Savoir Faire – 55% ABV), Pedro Ximénez Octave (Tongue in Cheek – 52.7% ABV), and Virgin Oak Firkin (The Apple of my Eye – 53.6% ABV). The collection of Scotch and bespoke whisky board will retail for £995. The bottles will be sold together as a set, with 50 sets created.

“With this unique collection, our Head of Whisky James Zorab has outdone himself,” commented Cask 88 Managing Director Martin Daraz. “The four bottles offer a rare opportunity to really savour the effect different cask finishes have on the flavour and texture of one single malt. It is a true honour for our company to celebrate the legacy of Sir Walter Scott and I can think of no more fitting tribute than releasing not one but four excellent whiskies that he would no doubt have enjoyed himself!”

As partners of Sir Walter Scott 250 and in the spirit of the year of stories, Cask 88 are honoring Sir Walter Scott by highlighting his love for whisky and the impact he had on its industry. In 1822, Scott presented King George IV with a dram of Scotch whisky, which the monarch very much enjoyed. The following year, an act of parliament overturned the repressive taxes which had driven highland whisky distilling underground.

“Sir Walter wrote so convincingly about the joys of the Highlands because he genuinely felt that himself. When he entertained at his home, his parties included pipers, Scottish foods and quaichs brimming with malt whisky. Even in private seclusion, he’d take a whisky toddy before bed. Here was a man who loved whisky and everything it represented,” said Sam Laing, Cask 88 Head of Content.

With craftsmanship at the heart of this collection, Cask 88 incorporated a range of Scottish craftspeople for the accessories which compliment the liquid of this bottling. The bespoke oak stand was handcrafted and engraved by Freddie Main of the Pencaitland business Oak and Black. To bring to life the vision of the stand appearing as a leather bound book, Cask 88 worked with the artisan Edinburgh bookbinder, The Gently Mad. The family business is led by Rab Mullins who created the 50 leather spines on the stand by hand. The calligraphy was penned by Edinburgh based artist Martin Hensey and incorporates the elaborate writing style of the 19th century.

The Cask 88 Sir Walter Scott Collection will be available to purchase through the company’s website for international shipping from Friday May 27, 2022. The online waiting list which informs clients when advanced sale begins can be accessed here.

Last year, Cask 88 unveiled Caointeach – The Keener in Green, as the fifth release in the Scottish Folklore Series.