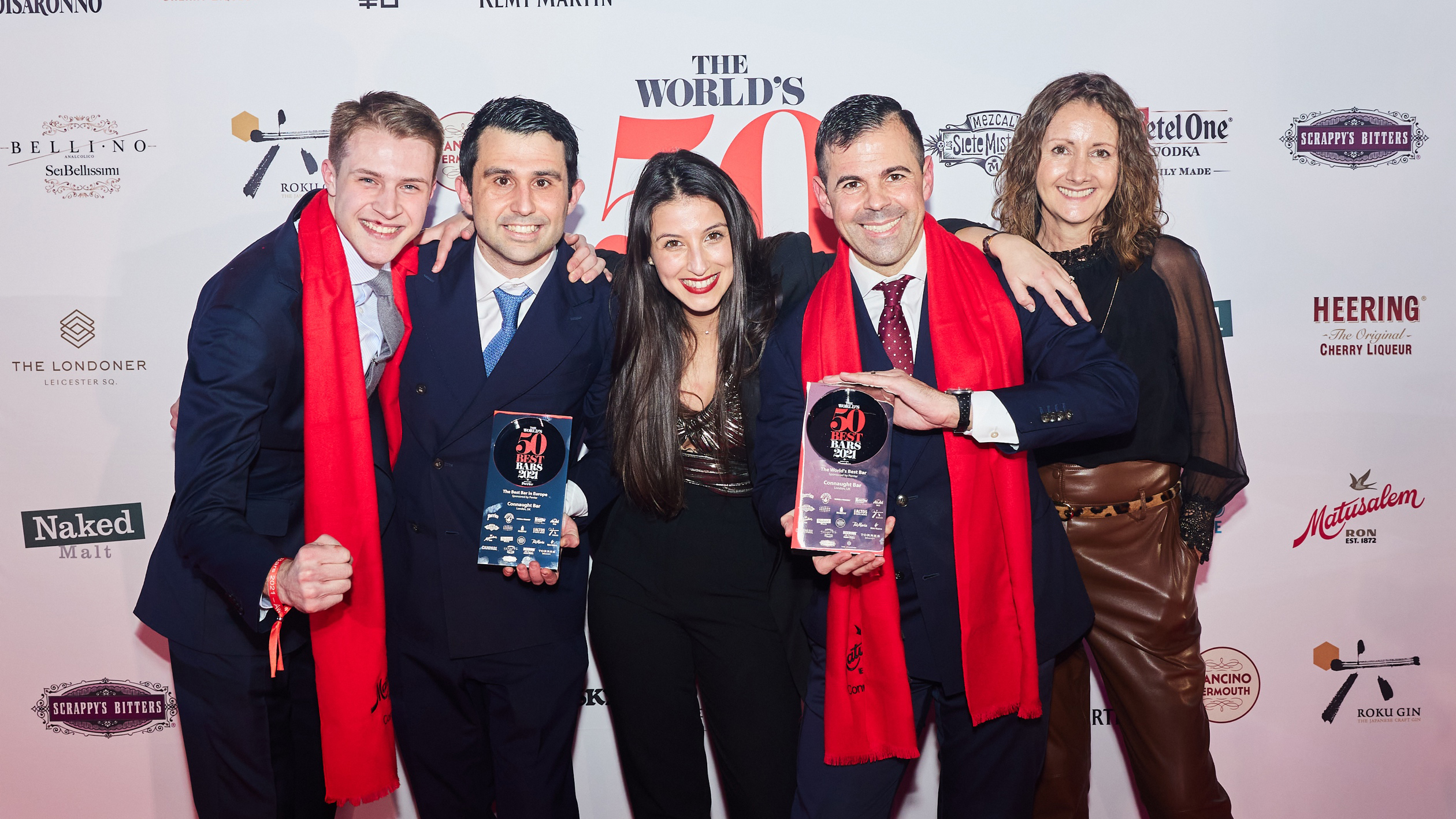 The World’s 50 Best Bars has unveiled its 2021 list of the planet’s best drinking spots. The 13th list of The World’s 50 Best Bars, sponsored by Perrier, was announced at a live awards ceremony on Tuesday December 7, 2021 in London, UK. After extensive consultation with industry figures, its Academy Chairs, bartenders, bar owners and its partners, the 50 Best organization received overwhelming feedback that the awards should go ahead and be celebrated in person this year following a virtual announcement in 2020 due to the pandemic. The awards recognise the hard work from the entire bar sector over the past year and aim to inspire and encourage hospitality venues in the next crucial stage of recovery.

The 2021 edition of the annual ranking features bars from 17 countries and sees London’s Connaught Bar take the No.1 spot, picking up The World’s Best Bar and The Best Bar in Europe titles. This is the second year in a row that Connaught Bar has taken the top slot.

Under the masterful leadership of Agostino Perrone, the venue’s Director of Mixology, Connaught Bar stays true to its principles of presenting artful, modern drinks with graceful service in an elegant setting. Designed by the late David Collins, the Cubist-inspired bar is known for its unique Martini trolley, where bartenders give a personalized drinks experience to guests. Perrone has developed a strong and dedicated leadership team including Head Mixologist Giorgio Bargiani and Bar Manager Maura Milia, who embody hospitality and drinks craft, as well as providing inspiration to a talented ensemble of junior bartenders who aspire to follow in their footsteps.

“Connaught Bar, we salute you – to be named The World’s Best Bar for two consecutive years is a feat that previously only two bars have achieved in the awards’ 13-year history,” said Mark Sansom, Content Editor for The World’s 50 Best Bars. “It’s a testament to Ago Perrone and his team’s continued pursuit of excellence, which is encapsulated in the way they have developed and modernised the Martini cocktail. We also want to send all the venues on the 2021 list of The World’s 50 Best Bars huge congratulations. It’s been another incredibly tough year for hospitality and the industry’s resilience and togetherness through these challenges is humbling. We hope that the positive stories around the bars’ success in the awards will help to drive vital business in the weeks and months to come.”

London takes the top two spots with Connaught Bar placing at No.1 and receiving The Best Bar in Europe for the second year in a row, with Tayēr + Elementary at No.2. The city’s third bar in the list is Kwānt at No.31. Spain leads Europe with four bars on the list, with Barcelona’s Paradiso claiming No.3 position, followed by Two Schmucks, which climbed 15 places to No.11. Salmon Guru, Madrid, is at No.24 and is the winner of Michter’s Art of Hospitality Award. Sips, Barcelona, is a new entry for Spain at No.37.

Greece claims two spots on the list with Athens bars The Clumsies and Baba au Rum at No.4 and No.14 respectively. Italy has three bars on the list as Milan’s new entry Camparino in Galleria at No.27 joins fellow Milanese bar 1930 (No.20) and Rome’s Drink Kong (No.19).

Sweden and Russia also have two bars each on the list, with Stockholm’s Tjoget at No.40 and Lucy’s Flower Shop coming in as a new entry at No.35. St Petersburg’s El Copitas has climbed 19 positions to No.8, and new entry Insider Bar, Moscow, is at No.13, winning the London Essence Best New Opening in the process. France’s Little Red Door in Paris again claims a spot on the list at No.29.

Mexico City’s Licorería Limantour is The Best Bar in North America, sponsored by Naked Malt, at No.6 on the list, and is joined by three other new entries from Mexico City: Hanky Panky at No.12, which is also the Disaronno Highest New Entry for 2021; Handshake Speakeasy at No.25; and Baltra Bar at No.38.

New York boasts three bars on the global ranking with Katana Kitten climbing six spots to No.10, Dante at No.30 and Attaboy at No.34, the latter also clinching the Rémy Martin Legend of The List for its continued success in the ranking. Miami re-joins the line-up this year with Café La Trova, a new entry at No.28.

Florería Atlántico, Buenos Aires, is The Best Bar in South America, sponsored by Tia Maria, and claims the No.5 spot. Also representing Buenos Aires is Presidente at No.21, which also collects the Nikka Highest Climber after rising 29 places this year, and Tres Monos, a new entry at No.33.

For the first time since 2010, an Indian bar returns to the ranking with Sidecar, New Delhi coming in at No.47.

Hong Kong’s Coa has climbed to No.7 and is The Best Bar in Asia, sponsored by Torres Brandy. However, Singapore has the most Asian representatives and more than any city in the world, with six bars on the list. Jigger & Pony is at No.9, Manhattan at No.15 and Atlas at No.16. There are two Singaporean new entries with No Sleep Club at No.26 and MO Bar at No.36, and Tippling Club, Singapore is a re-entry at No.43.

Hong Kong is represented by three bars this year, with Darkside a new entry at No.49 and Quinary re-entering the ranking at No.50, alongside the award-winning Coa. In Mainland China, Shanghai’s Sober Company is at No.39, while Epic and Union Trading Company are both new entries at No.41 and No.48 respectively.

Japan claims two spots with Tokyo bars SG Club at No.18 and Bar Benfiddich at No.32, while South Korea’s Seoul bar Charles H climbs seven places to No.42.

Australia stays strong and the Middle East makes a splash

Sydney has three bars on the list, with Maybe Sammy at No.22 picking up the title for The Best Bar in Australasia, sponsored by Asahi Super Dry. Cantina OK! is at No.23 and there is a new entry in Re at No.46, which also collects the Ketel One Sustainable Bar Award after an audit by 50 Best’s sustainability partner, Food Made Good Global. Another new entry for Australia is Above Board, Melbourne, at No.44.

From the UAE, Dubai’s Zuma is once again crowned The Best Bar in the Middle East and Africa, sponsored by BelliNo, and is ranked No.17. Dubai also has a new entry this year with Galaxy Bar at No.45, which completes ascension to the list after being named Campari One To Watch last year.

To kick off the ceremony Thunderbolt, Los Angeles, was named the winner of Campari One To Watch, which is given to a bar outside the main list that the 50 Best team believes has the ability to break into the ranking in future editions.

Cardiff’s Lab 22 is the inaugural winner of the Siete Misterios Best Cocktail Menu. Any bar in the world was eligible to enter this award, which is graded by 50 Best’s panel of 28 global Academy Chairs.

French-born Remy Savage is named the Roku Industry Icon. For this award all 600 members of the voting Academy are asked to name the person who has done more for the progress of the bar industry than any other individual. Savage is well regarded among drinks connoisseurs for his extensive cocktails and spirits knowledge. He is world-renowned for his craft, creativity and unique way of approaching the bar experience.

Hanky Panky in Mexico City secures the Disaronno Highest New Entry, as the bar which enters the list in the highest position at No.12. With a team led by Bar Manager Roberto Ponce and comprising leading bartenders in Mexico City, Hanky Panky provides a curated international experience, with influences from all over the world.

Moscow’s Insider Bar wins London Essence Best New Opening at No.13, as the bar which enters the list in the highest position of any that have opened during the voting period. Founded by Galaktion and Elina Tabidze, the Insider Bar and Lab were inspired by the bars of London, Paris and New York. The bar itself operates within the guest space, as well as the Insider Lab, which is a first for Russia.

Presidente in Buenos Aires claims the Nikka Highest Climber title, having risen 29 spots from No.50 in 2020 to No.21 on The World’s 50 Best Bars 2021 list. Located in a stunning period building in the cosmopolitan streets of the Recoleta neighbourhood, Presidente is the glamour-spot cocktail bar of Buenos Aires – but one that matches its style with substance.

Attaboy, New York, is named Rémy Martin Legend of The List, an award which is given to a bar that has performed most consistently in the list since its inception and can only be won once. Attaboy is an everyman cocktail bar from Sam Ross and Michael McIlroy, which is now run by Haley Traub on the site of New York’s legendary Milk & Honey.

Re, Sydney, secures the Ketel One Sustainable Bar Award. Opened in early 2021 by UK expat Matt Whiley, Re provides a sustainable drinking experience where every part of the bar is influenced by reducing waste and creating a closed-loop service.

Other special award winners announced in the run-up to the event on 7th December include Salmon Guru, Madrid, which was named the winner of the Michter’s Art of Hospitality Award and Lynnette Marrero of Llama Inn, New York, winner of the Altos Bartenders’ Bartender Award.

For 2021, The World’s 50 Best Bars made a variety of changes to adapt to the impacts the pandemic has had on bars around the world. Due to limited travel opportunities throughout much of 2020 and 2021, the voting guidelines and voting requirements were re-evaluated to reflect this. The list is based on members of The World’s 50 Best Bars Academy’s bar experiences across a voting period between March 2020 to September 2021 inclusive. For this year there was no requirement for The World’s 50 Best Bars Academy to cast international votes, although if members had been fortunate enough to travel internationally, they were encouraged to allow these experiences to inform their voting choices, and they were asked to vote for 7 bars in order of preference. Voting remained anonymous and secure, and the voting process and results are independently adjudicated by Deloitte.

For more information, head over to the World’s 50 Best Bars’ official website.