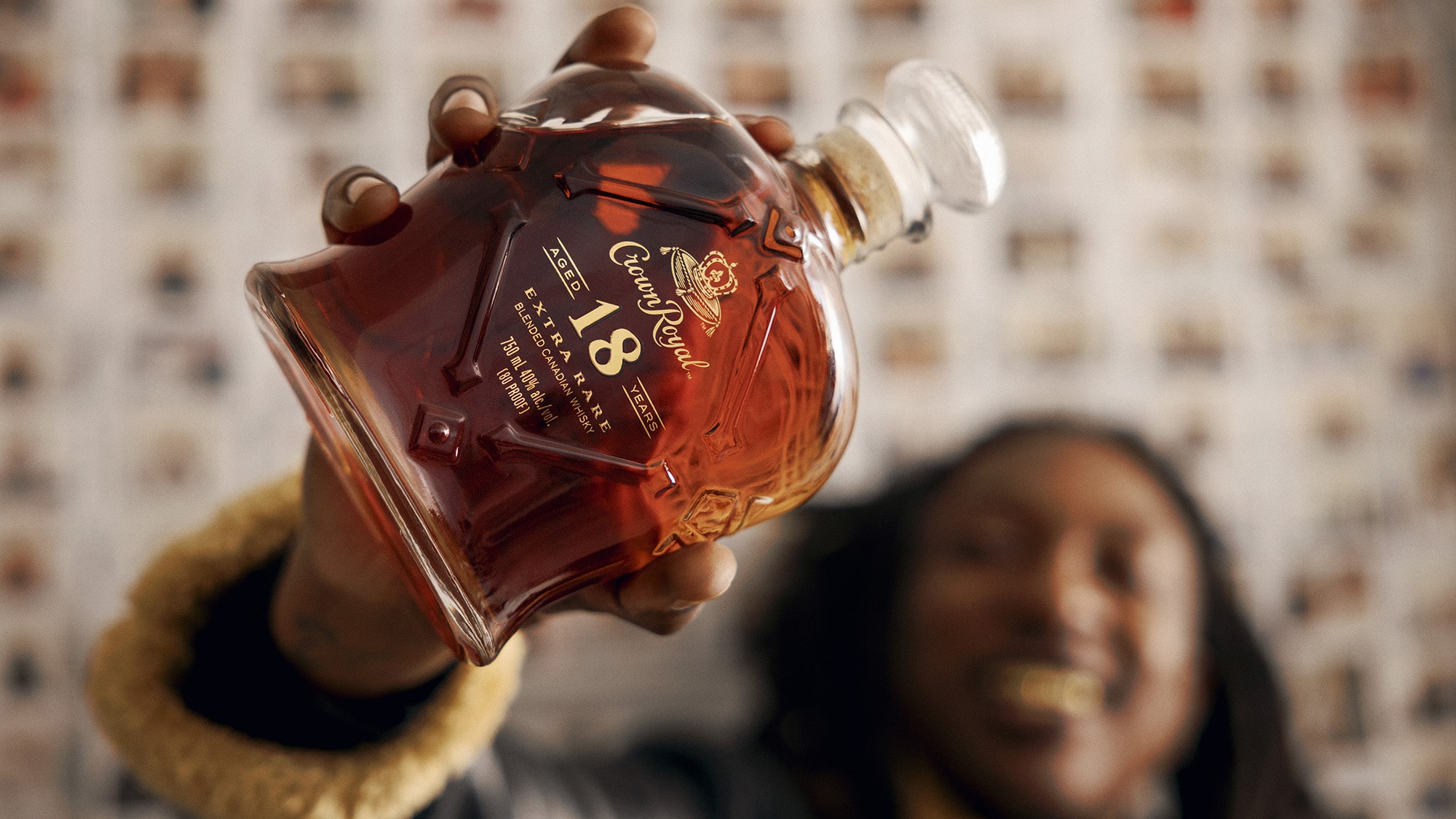 Crown Royal has unveiled its most luxurious and rare whisky to date, Crown Royal Aged 18 Years. The new offering is a rare blend of exceptional whiskies, handcrafted by their master blender, patiently aged to perfection for eighteen years. In honor of the release, Crown Royal commissioned celebrity grillz maker Scotty ATL, to create four exclusive grillz sets using the liquid variant as the inspiration, in a first of its kind collaboration that celebrates new royalty and redefines luxury in the Atlanta community.

Crown Royal Aged 18 Years offers layers of intensity that are both surprising and delightful. Enticing notes of vanilla and stone fruit greet the nose, followed by the velvety body of light oak tempered by caramel spice. Delicate notes of nougat linger in the full-bodied finish. These layers, like the grillz art form, offer rare luxury that surprise and excite the person experiencing it.

“It’s an honor to partner with Crown Royal on the launch of Crown Royal Aged 18 Years, their rarest whisky blend, in a way that pays homage to the craft of creating grillz and its impact on Atlanta culture and our community,” says Scotty. “There is a thoughtful process to each grillz set I make, from selecting the materials to sizing it for the most perfect fit. I make sure all my clients are left feeling like royalty, much like the feeling after a sip of Crown Royal Aged 18 Years.”

In the creation of the grillz Scotty collaborated with a mentor and legend in his own right, Eddie Plein, “the Originator and Godfather of Grillz.” Through Plein’s continued mentorship in this unique jewelry art form Scotty was able to create extra rare grillz sets that are made with rare VVS diamonds, opals, and 1-of-1 engraved arrows, nodding to Crown 18 Year Old’s bottle design. The foundation of the grillz is made from Super Gold, a term coined by Scotty to describe the highest karat of gold he uses for his most luxurious grillz sets.

“I am excited to be a part of Crown Royal’s announcement of their latest variant and see the evolution of the grillz culture. While grillz once symbolized poverty and tough economic times to some, they have now become a marker of culture, elevation, and the new definition of luxury,” Eddie shared.

With only four of these grillz sets in the world, one was molded for Scotty himself, two were made for Grammy-nominated and Atlanta playmaker duo, EARTHGANG, who routinely pay homage to the unique southern Black culture of Atlanta through their soulful tunes and one set is up for auction via PopShop Live on December 15th at 6 PM ET. The public will have an opportunity to bid for a chance to own a piece of rare luxury, with the proceeds (i.e., the winning bid ) benefiting the Atlanta Artist Relief Fund, whose mission is to help feed and support artists (musicians, dancers, painters, actors, etc.) that make up the fabric of the Atlanta community. As part of their ongoing commitment to support local communities, Crown Royal will match the final auction sale price up to $10,000.

“Our artistry is founded on principles instilled in us as we grew up in Atlanta,” EARTHGANG shared, “and because of the city’s impact on our lives, we’ve always been a mouthpiece for the culture and our community. Our partnership with Crown Royal allows us to give back to the community that raised us, while appreciating the time it takes to create something so luxurious as Crown Royal Aged 18 Years, much like each song we make.”

The specialty pieces highlight how luxury and rareness are not only something you can see. They come from within, showcasing the values and uniqueness that comes from Atlanta’s rich history and culture, evolving over time into something exquisite.

“The Atlanta community is rooted in luxury and defining the culture today,” Nicola Heckles, Vice President of Crown Royal, explains. “We are honored to partner with this next generation of artists and changemakers and happy to be able to support the Atlanta Artist Relief Fund, all while enjoying the crown jewel of our rarest stock, Crown Royal Aged 18 Years.”

Crown Royal Aged 18 Years will be available in the United States at liquor stores, select bars and restaurants in limited quantities and online via Drizly in select locations.

For more information, head over to Crown Royale’s official website.

In March, Crown Royal launched its own line of ready-to-drink canned cocktails. The new RTD offerings are designed as three classic, signature serves, all offering “the quality and deliciousness of a great cocktail,” says the brand. “There is something for everyone of legal drinking age, no matter the occasion.”