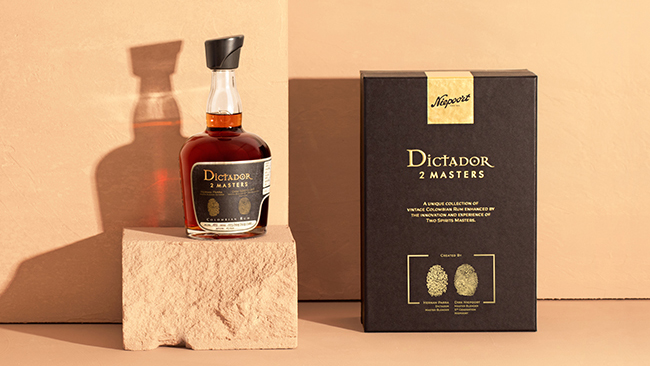 Dictador has teamed up with Niepoort for the latest release in its Two Masters series, a Port-finished rum that’s priced at over $1,100. The limited edition Dictador Two Masters Niepoort is the ninth bottling in the Colombian rum brand’s Two Masters range.

A collaborative effort between Dictador master blender Hernan Parra and winemaker Dirk Van der Niepoort, the new offering is made with four vintage Dictador rums from 1971, 1974, 1978 and 1980. It was aged for 12 to 16 months in 550-litre pipa barrels. Bottled at 48% ABV, just 620 bottles of the rum will be made available.

“Today, all Port is shipped in bottles, but in the olden times they sailed the world in ‘pipas’ or pipes,” explained Van der Niepoort. “Smaller sized barrels were called hogsheads, which was a half pipe, quarters and octaves. Wealthy individuals would order a ‘pipe of Port’ from their wine merchant, either for their own consumption or to lay down as a gift for a young relative. A pipe should not be confused with a cask, which is a larger type of barrel used for ageing. Casks are always made from oak, but shipping pipes could be made of either oak or chestnut.”

Dirk is the fifth generation of his family to produce Niepoort Port, which was established in the Douro Valley in 1842.

“Port is a symbol of rich flavours and intense maturity,” said Parra. “To me, Niepoort is the symbol of merging family traditions, high quality products and ever-evolving creativity. Combining this, it symbolises what this project stands for: the synergy of Two Masters.”

For the release, Dictador created what it believes is the most protected bottle in the world. Features include 11 layers of protection, guillochés, gold paint with UV glowing protection, micro-text and typographical numbering. Additionally, the armored glass uses fingerprint technology for unlocking.

In March, a bottle of vintage 1976 Dictador Generations En Lalique sold for $41,950 during a Sotheby’s auction. The sale of the Colombian rum makes it one of the most expensive bottles of rum sold at auction.

In January, Dictador announced the first release in its new Capitulo series, Capitulo Uno. The new range is designed for consumers who would like to invest in a collectible Rum, “a bottle they will be proud to have in their home collection”.