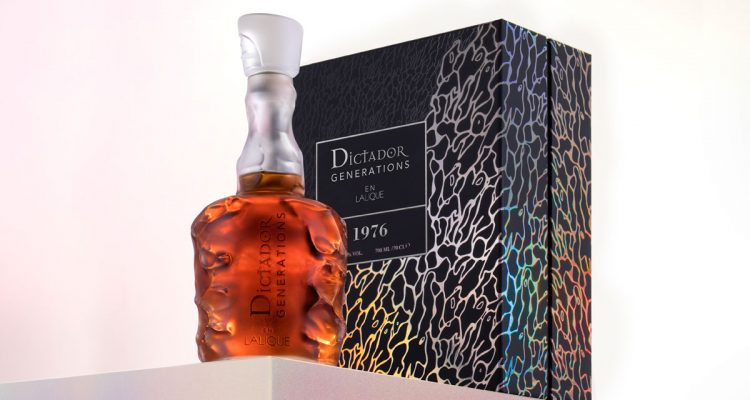 A bottle of vintage 1976 Dictador Generations En Lalique sold for $41,950 during a Sotheby’s auction. The sale of the Colombian Rum makes it one of the most expensive bottles of Rum sold at auction.

The Dictador Generations En Lalique bottle was the highest value ever achieved for a Rum during a Sotheby’s auction. It is the first collaboration between the French glassmaker and a Rum brand.

Made by Dictador’s master blender Hernan Parra and his father Dario, the bottle is number 0 of 300 decanters. It is a blend of vintage Rums produced in 1976, and aged in American oak and Port casks. The Rum marks the first time the father-and-son duo has worked on an expression together.

The bottling pays tribute to the Parra family, who have been distilling rum in Cartagena since 1913. The decanter was designed by Lalique’s artistic and creative director Mark Larminaux, and inspired by the Caribbean sea. The design incorporates water patterns, and Lalique’s signature clear and frosted crystal. It comes in a one-of-a-kind gift box.

The Sotheby’s lot that featured Dictador Generations En Lalique included personal letters from Hernan and Larminaux, a print of the bottle’s original digital rendering signed by the designer; an invitation to Dictador Art Masters in Cartagena for two people; and a signed print by artist M-City, curator of Dictador Art Masters.

Proceeds from the sale of the Rum will go to the Dictador Art Masters charity, which focuses on conservation of the Colombian jungle and the propagation of street art culture.

In January, Dictador announced the first release in its new Capitulo series, Capitulo Uno. The new range from the Colombian distiller is designed for consumers who would like to invest in a collectible Rum, “a bottle they will be proud to have in their home collection.”

In October, Dictador teamed up with Hungarian winemaker Royal Tokaji for the newest edition to its Two Masters series. The cask-finished series has previously seen the Colombian Rum brand pair up with some of the world’s most famous distillers and winemakers.