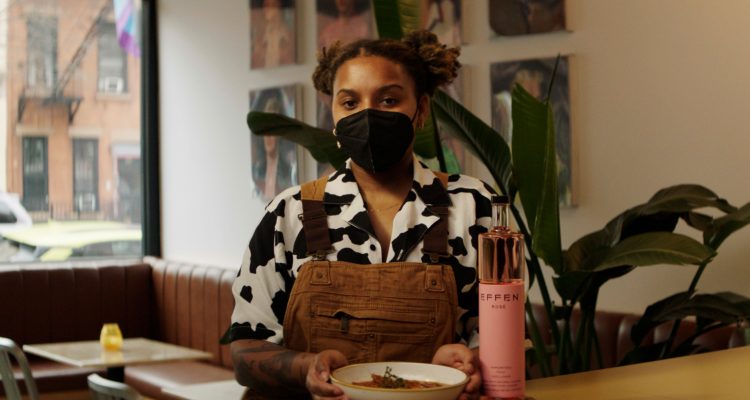 Effen Vodka has partnered with filmmakers Erica Rose and Elina Street to produce a short film about Chef Kia Damon (Day-Mone) for Women’s History Month. The video spotlights Kia’s culinary excellence, explores queer food culture, and shows how she supports her community through her organization, Kia Feeds The People.

Kia Damon is a self-taught chef and proud Floridan woman. While paving her way through kitchens, she launched The Supper Club From Nowhere as a response to the lack of visible Black women in her culinary community. She soon became known as Kia Cooks as she spent her time doing pop up dinners, private cooking and cooking demos. After moving to New York, she took over as an Executive Chef in Manhattan at 24 years old. Next, she became Cherry Bombe Magazine’s first Culinary Director.

Kia Feeds The People Program is a budding non profit, co-founded by Kia, that aims to fight food apartheid by getting quality, organic produce and pantry items to the underserved and the Black, QTPOC communities in Brooklyn, New York, and started as a result of the pandemic and protests over the Summer.

Filmmakers Erica Rose and Elina Street’s mission is to tell queer and female driven stories and, with this piece, they explore the movement of queer food and how it nourishes, feeds and cultivates the LGBTQIA+ community, through the lens of Kia’s personal story – what she serves, her chosen family and her organization’s mission.

Effen Vodka has partnered with Rose and Street, as well as Kia, on this short film for Women’s History Month as well as a specialty Effen Rose Vodka cocktail recipe and Gumbo food pairing. Check out the recipes and the video below

Directions: Mix the grapefruit juice, lime juice, simple syrup, Effen Rosé vodka and a spoonful of ice in a cocktail shaker. Stir and taste. Strain into a chilled martini glass and garnish with grapefruit, and thyme. Drink responsibly + enjoy!