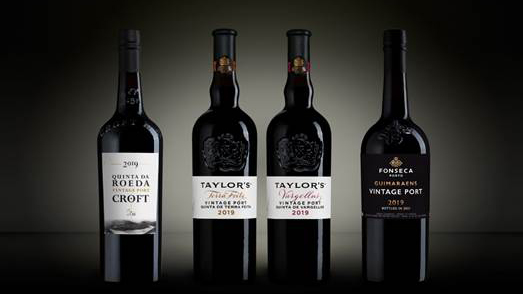 The Fladgate Partnership has four single quinta vintage Ports from the 2019 vintage under its Taylor’s, Croft and Fonseca labels. The four Ports will now be cellared for release at a later date.

He added that he expects the conditions experienced in 2019 would make for Ports with “extensive longevity.” Conditions were drier and cooler than a normal year, allowing grapes to retain acidity while reaching maturity. Yields achieved by Taylor’s were described as being almost a tenth lower than the 10-year average.

“The cool conditions in August and the much-welcomed rain on the 25 and 26 August, were key to preserving the natural acidity of the grapes that is one of the characteristics of the Ports from 2019, said Winemaker David Guimaraens. Yields were relatively low, but this was made up for in the depth and structure of the 2019 vintage Ports.”

Also declared was the 2019 vintage Port from Croft’s Quinta da Roêda, which Bridge said had “great depth and concentration” and would be released in the next eight to 10 years. Speaking of the Croft release, Guimaraens said: “Roêda is an outstanding property, which includes some old vineyards of great historic interest. These contribute to the wonderful richness of the Roêda vintage Ports, which really stand out for their aromatic complexity.”

Finally, Fonseca declared a 2019 vintage Port under its Guimaraens label. Bridge expects the  2019 to also be released in the next eight to 10 years. It shows “density and structure, with an impressive depth”. Guimaraens added: “The 2019 displays all the fine fruit character that we expect from Guimaraens vintage Ports combined with an attractive freshness and finesse typical of the year.”

4,000 cases of the Fonseca Guimaraens vintage Port have been made.

For more information check out the Fladgate Partnership official website.