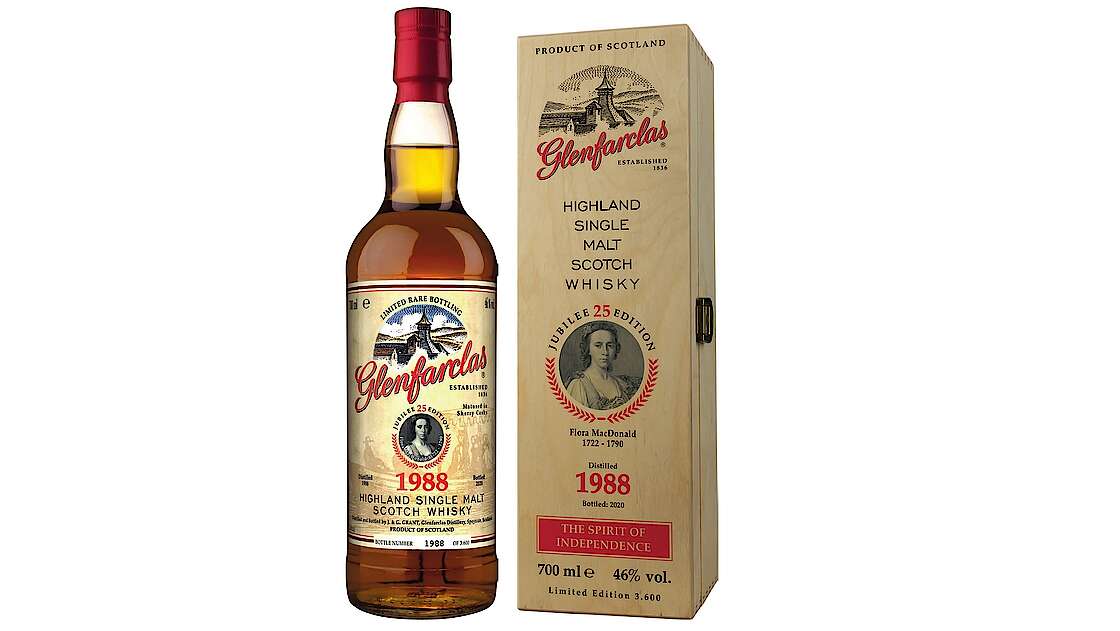 Glenfarclas has unveiled the 25th Edition of its Famous Scots Series, a 1988 Vintage Whisky, and it honors Flora MacDonald. MacDonald is famous for helping Scottish Prince Charles Edward Stewart escape after the defeat at Culloden in 1746. She accompanied the refugee who was disguised as a maid, Betty Burke, on the crossing to Portree on Skye, from where he fled into exile in France.

The 1988 Glenfarclas Edition No. 25 of the Limited Rare Bottlings is a vintage single malt made from 100% Sherry casks. It was bottled at 46% ABV without chill filtration and without coloring. Each bottles of the Famous Scots series is dedicated to a famous personality from Scottish history. The Speyside brand began the collection back in 1996.

The choice of Flora MacDonald for the 25th edition wraps back to the inaugural release of the Glenfarclas Famous Scots, which was dedicated to Charles Edward Stewart, the unsuccessful leader of the Jacobite uprising, also known as Bonnie Prince Charlie.

The new Glenfarclas Flora MacDonald follows Edition 24, Glenfarclas 1990, which was dedicated to doctor and botanist Robert Brown who made important contributions to botany largely through his pioneering use of the microscope. A few bottles can still be found at specialty shops.

Back in July, Glenfarclas released the Stillmen’s Dram and announced part of the earnings from every bottle sold would be donated to Moray Food Plus, a food bank working to help combat food insecurity in the Speyside community. The Speyside distillery donates 10% of sales of the limited edition 10-year-old single cask Whisky to the local food bank.

Originally, the Whisky was supposed to be unveiled as Glenfarclas’ exclusive bottling for the 2020 Spirit of Speyside festival in April, which was cancelled due to the coronavirus pandemic.