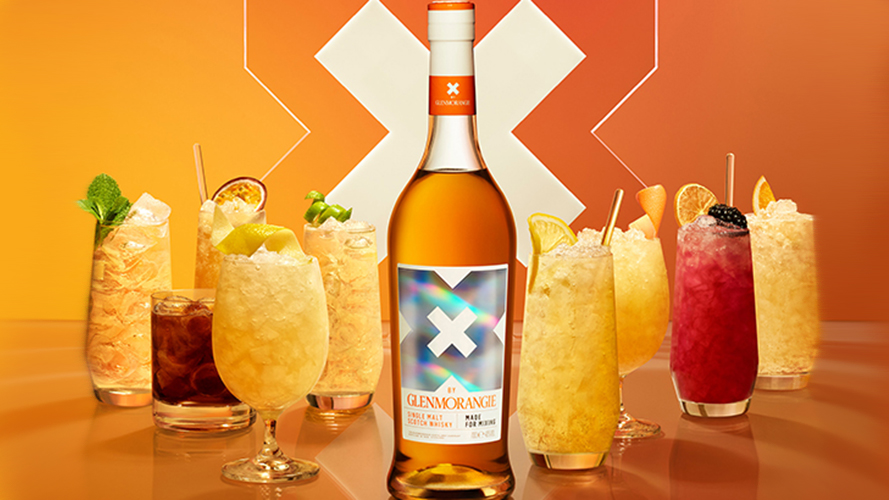 The Glenmorangie has unveiled X, a new “sweeter, richer” whisky. The single malt Scotch was designed by the Highland brand to be mixed.

Created in collaboration with leading bartenders across the world, X by Glenmorangie has been aged in ex-Bourbon casks and finished in new char oak barrels. It is bottled at 40% ABV and is said to have a “sweeter, richer taste.” The LVMH-owned brand recommends consuming the expression in tall, simple serves, including mixed with tonic water or cola.

“X by Glenmorangie came from our dream of creating even more flavour possibilities, with a single malt that is made to mix,” said Dr Bill Lumsden, Glenmorangie’s director of whisky creation. “Consulting with top bartenders, we crafted this sweeter, richer single malt for all those enjoying mixing at home.

“X by Glenmorangie is perfect paired with a favourite mixer. So, whether you’re planning a brunch or a date night or want to experiment with your own flavour combinations, this whisky will bring your drink the x-factor!”

To help consumers get the most of the new whisky, Glenmorangie has created a series of easy serves that each require between two to four ingredients. The recipes can be found on a QR code on the bottle or through the brand’s social media channels and website. A neck tag on the bottle will also showcase three serves.

X by Glenmorangie will be available from Clos 19, Amazon and whisky specialists beginning May 1, and will be priced at £30 ($42 USD) per 700ml bottle.

Back in September, Glenmorangie released A Tale of Cake, which is the result of Lumsden experimenting with Tokaji dessert wine casks. In December, Glenmorangie unveiled “It’s kind of delicious and wonderful” campaign. Shot by celebrated photographer Miles Aldridge, the advertisement displays the Highland Whisky is a beautiful technicolor world.