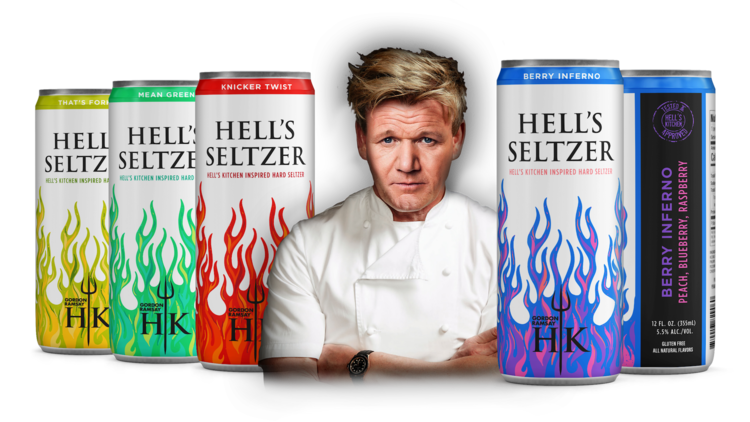 Gordon Ramsay has joined in on the hard seltzer craze with the launch of his Hell’s Seltzer range. The set of ready-to-drink cans from the celebrity chef come in four “unapologetically bold” flavors: That’s Forked, Mean Green, Berry Inferno, and Knicker Twist.

The hard seltzer flavors were inspired by menu items from Ramasay’s Hell’s Kitchen restaurant chain. That’s Forked is made up of Key Lime, Vanilla, and Graham. Mean Green is a  kiwi, lime, mint and pineapple seltzer. Berry Inferno is a a peach, blueberry and raspberry variant. Knicker Twist is described as, “Passionfruit, Pineapple, Orange.”

The Gordon Ramsay Hell’s Seltzer range is made in collaboration with distributor Brew Pipeline and drinks development agency Global Brews of London. It is set to hit shelves in the United States in early 2021.

Coming in at 5.5% ABV, the gluten-free seltzers are made with “all-natural flavors” and will be sold in variety packs of 12 cans, featuring three of each flavor. They will retail for the price of $15.99-17.99.

The RTD space is becoming busier and busier as more and more celebrities enter the fray. Last week, Travis Scott announced he would be entering the category with the launch of his Cacti hard seltzer range. In October, Olivia Culpo joined canned cocktail brand Vide as Creative Director.

It isn’t only celebrities joining the canned cocktail space. Back in September, Coca-Cola announced it will release a hard seltzer in the first half of 2021 under its Topo Chico brand. In August, Bacardi entered the ring with four mixed drinks. Absolut Vodka joined the party with six RTD options. Kahlua introduced a Nitro Cold Brew that features Rum, while Tia Maria unveiled their own Iced Coffee Frappe. Opihr released two Gin & Tonic canned cocktail options. Jose Cuervo have entered the market via its Playamar range, and Ketel One also joined in via its Botanical Vodka Spritz.