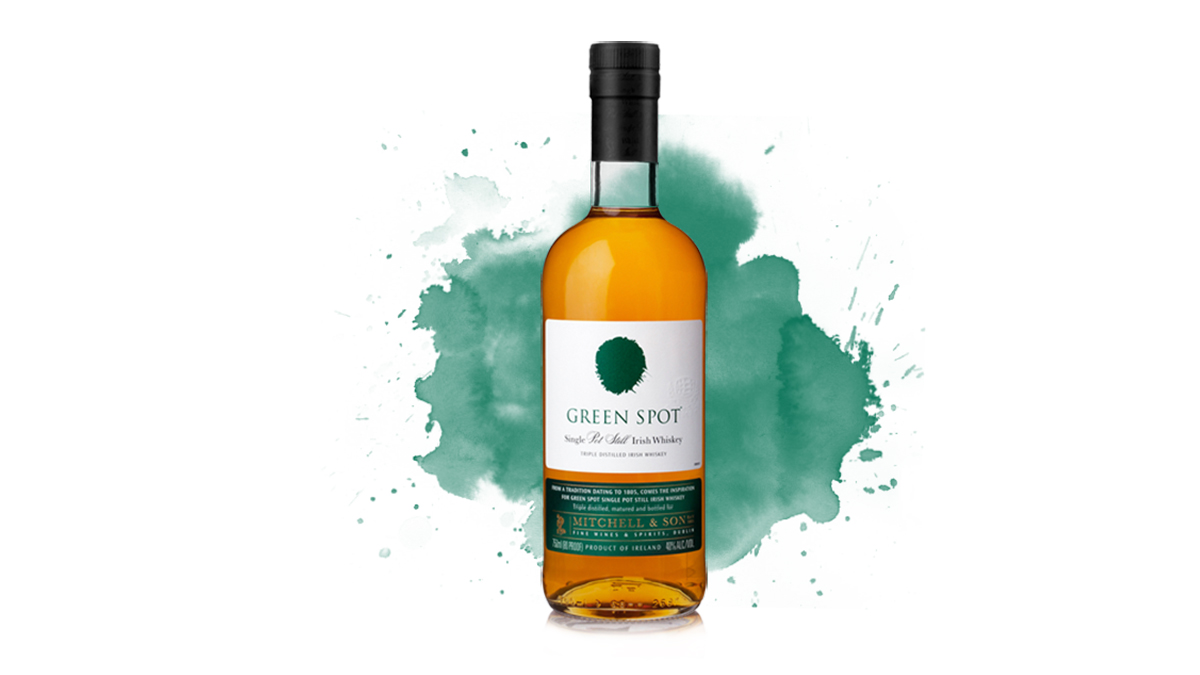 Green Spot Irish Whiskey is made from a combination of malted and unmalted barley, milled finely and moistened with Irish water. The fermentation is then triple distilled in traditional copper pots to produce the desired taste. Green Spot is aged in ex-Bourbon casks and ex-Sherry butts from 7 to 10 years and is produced in small batches.

The nose presents an aroma of tropical fruit with notes of raisin, guava, and papaya, along with a hint of lingering green apple. Its taste is complex and smooth, without the usual Irish whiskey sweetness upfront. It presents first with a bite, a grassy earthiness but then notes of apple, pear, cinnamon, vanilla, and brown sugar appear.

Green Spot Irish Whiskey can be enjoyed neat, on the rocks, or as part of a cocktail. The distillery recommends using it as part of a Copper Tea Pot, a combination of Green Spot, chilled Sencha Green Tea, Apricot jam syrup and citric acid with a bit of lemon peel on the rim. Another excellent option is a Spot and Soda, Green Spot whiskey with a spritz of soda and a bit of apple or mint syrup, garnished with a sprig of chocolate mint.

The Whiskey is on sale for $63.59 and can be purchased via Drizly.

Mitchell & Son, the family behind Spot Whiskeys, was known for its bakery opened in 1805 — its tea and cakes sold in a shop on Grafton Street in Dublin, having earned the title of the “Confectioner to Her Majesty”. In the 1880’s, the Mitchell family went on to become Whiskey bonders, wholesale buyers of distilled Whiskey who were then responsible for the aging and blending. In the late 1800s there were bonders in every town in Ireland because there was little expense in building or running a distillery. The Mitchells, however, began importing fortified wine casks to mature their whiskey. They marked their casks with colored spots as a way to indicate how various casks were left to age.

Mitchell & Son, a seventh-generation family, was known for producing excellent Single Pot Still Irish Whiskey in its network of cellars underneath Fitzwilliam Lane in Dublin. Depending on the Whiskey being made, four different types of casks are used to yield the flavor desired — Bourbon, Sherry, Malaga, and Leoville Barton wine casks. Samuel Beckett, the playwright, ordered his Green Spot Whiskey from the Mitchell & Son Wine Merchants shop.

The Spot Whiskeys are today produced by the Irish Distillers at the Midleton Distillery in County Cork exclusively for Mitchell & Sons. In November 2020, the brand began offering Blue Spot Irish Whiskey again.

Other bottles from same company: