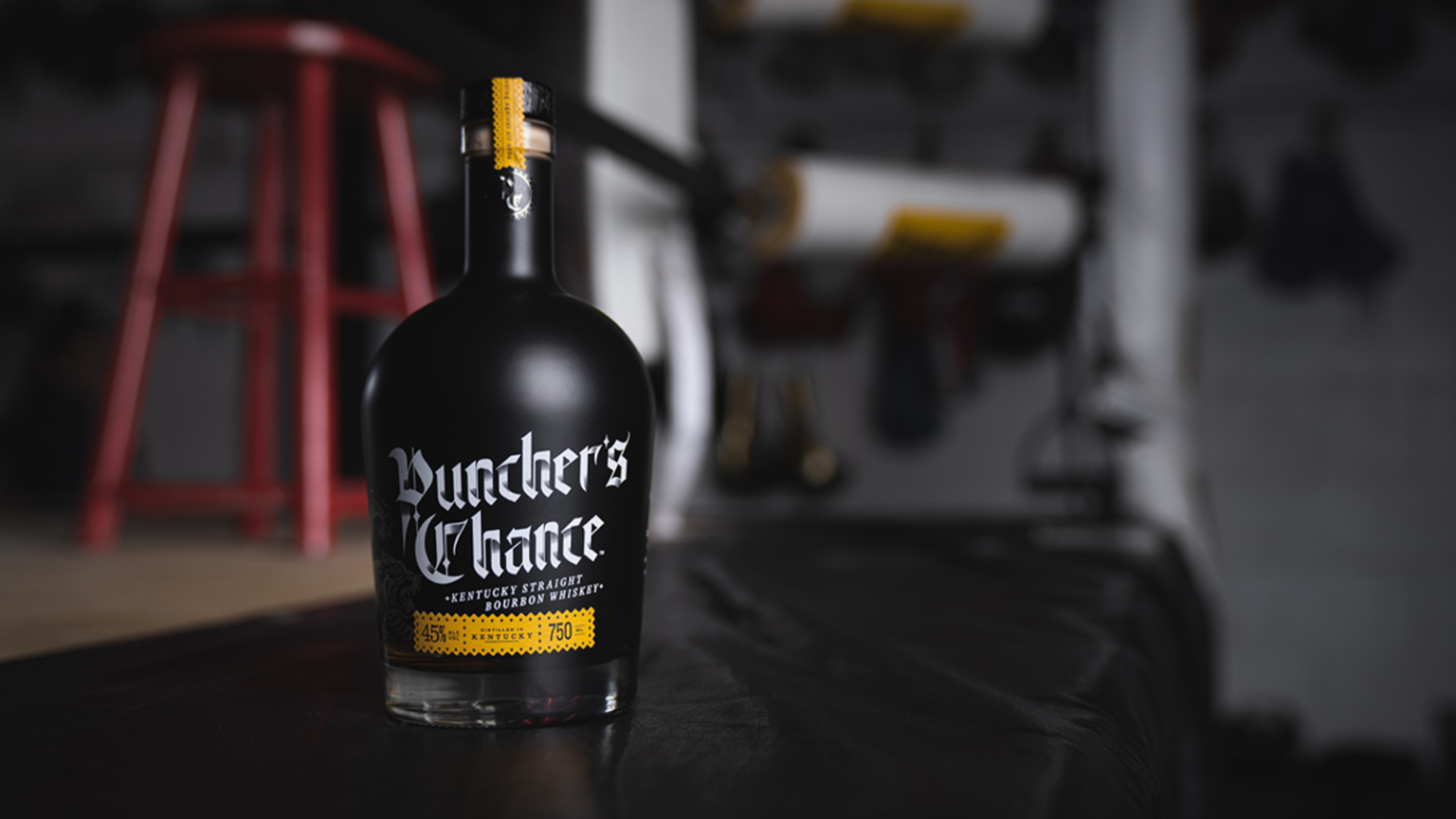 Since launching in the middle of the pandemic, Puncher’s Chance has become one of the fastest growing bourbons on the market. It has received glowing endorsements from Guy Fieri and Mike Tyson, just to name a few, and is on track to ship more than 200 private barrels in 2021.

Puncher’s Chance Bourbon comes from Wolf Spirit Distillery, which was founded in 2017 by Umberto Luchini after he left Campari. In just three years, Wolf Spirit’s portfolio has grown to include Blood x Sweat x Tears Vodka out of Eugene, OR; Tom of Finland Organic Vodka from Finland; Puncher’s Chance 100% Kentucky Straight Bourbon; and Bosscal Mezcals from Durango, Mexico.

In this week’s Bottle Breakdown, we sat down with Umberto Luchini to discuss Puncher’s Chance Bourbon, where his interest in whiskey came from, and find out what goes into every bottle.

Spirited Zine: Just to start, can you tell us about your first experience drinking whiskey? And how that experience impacts the way you view Puncher’s Chance Bourbon?

Umberto Luchini: My first experience drinking whiskey was back in Europe. When I turned 18 years old, my Dad and I went out for a fancy dinner in Milan. He had me taste a glass of Johnny Walker. I have no memory if it was Red or Black, but I do recall looking at the “walking man” with curiosity and intrigue. My marketing passion was kicking off… But my knowledge and understating of whiskey was only established during my career when I had the privilege of working closely with Jimmy Russell for many years, after the acquisition of Wild Turkey by Campari. His expertise in the original American spirit is above anyone else’s. His ability to transmit his own passion and commitment to Bourbon is contagious. I’ve seen non-whiskey drinkers at awe in hearing his stories, his tutorials and tastings. The Master Distiller of master distillers. Jimmy taught me to stay true to myself, to be firm in my beliefs and to think long term – trends come and go, and preparation is the only way to be sure you will always be there.

SZ: What was the inspiration for creating Puncher’s Chance? Was there a moment of inspiration or did it come together over time?

UL: It started with a big passion for brands. In 2002, I joined Campari, a multinational Italian liquor company, to educate Americans on the beauty of the world-famous Italian bitter. During my 17-year tenure I had a particularly successful experience taking on an unknown tequila then naming, packaging, pricing, and positioning it. Today that brand, Espolòn, is “the Tito’s of Tequila,” selling nearly 400K 9L cases. In 2017, I left Campari with multiple business models and dreams of becoming an entrepreneur; that same year Wolf Spirit was founded.

In just three years, Wolf Spirit’s portfolio has grown to include Blood x Sweat x Tears™ Vodka out of Eugene, OR; Tom of Finland Organic Vodka™ from Finland; Puncher’s Chance™ 100% Kentucky Straight Bourbon; and a new addition of Bosscal® Mezcals from Durango, Mexico.

We started with our two vodkas; once they were up and running, we were hungry to do more. I wanted to create another brand that represented our ideals of putting in the work and fighting for what we believe in: in particular the American fighting spirit. Kentucky Bourbon is the pre-eminent American spirit, so of course we chose that as the juice. The positioning was inspired by great boxers like Mike Tyson: as we’ve seen, a split second can change the outcome of not just a boxing match, but any fight. Puncher’s Chance™ is for the underdog: no matter how dire the situation, he or she will pick themselves back up. They are the ones who persevere long enough to eventually land that one punch that matters.

SZ: The whiskey is a marriage of 4-, 5-, and 6-year-old Kentucky Straight bourbons. Where do these bourbons come from?

UL: The bourbon is sourced from IJW Whiskey Company, the largest independent library of bourbon and rye in the world. Over the past four years, IJW has purchased a historic building on Louisville’s Whiskey Row, developed a 100-acre campus in Danville, KY, built a large-scale bottling facility, and constructed four 20,000 ft2 rickhouses, where it has been quietly aging more than 100,000 barrels spanning an unprecedented range of mash-bills.

IJW’s operations are led by top whiskey talents — Master Blender Steve Hughes and Master Distiller Kevin Curtis — unassuming “Bourbon royalty” who each bring more than 30 years of experience at the top of the industry.

SZ: Can you take us through the blending process and tell us how you perfected the blend of the trio of whiskeys?

UL: The mash bill is 73% corn, 15% barley, and 12% rye, which represents a mid-level rye content among Kentucky Bourbons, with a little extra malted barley than is typically used.

SZ: The bottle design is sleek and stylish. How did you decide upon the design and where do you get them made?

UL: I was looking for a bottle design that portrayed strength, courage, beauty and sleekness, allowing for modern touches to reflect the fact that Wolf Spirit is a new player in the bourbon category. While there are a few hints to tradition – the yellow craft label, the neck label, the cork stop – I purposely stayed away from most traditional bourbon cues, simply because Puncher’s Chance™ is not a traditional bourbon brand. Instead, we opted for a bottle that is black 2/3 of the way down, allowing for the beauty of the liquid color to be seen at the bottom while allowing for the bottle to be visible on the back bar even when half empty. In addition, we chose a unique font that is very elaborate yet retains visibility. We added a tiger on the label as it is the ultimate symbol within the fighting community. If you look at the tattoos of most MMA fighters, you will often find this feline prominently featured. The tiger is a symbol of bravery, strength, power, and valor. Although it varies from culture to culture, tiger symbolism runs deep and is understood around the world.

Our glass is produced by Saver Glass in France.

SZ: How do you recommend enjoying Puncher’s Chance Bourbon and what should it be paired with?

UL: Puncher’s Chance™ is best enjoyed neat, or on the rocks. It is great to sip on while enjoying a nice Italian charcuterie board of hard cheeses and cured meats.

SZ: One of the inspirations for Puncher’s Chance is “fighting for what we believe in.” How does that concept work into the ethos of the final product?

UL: Wolf Spirit is made up of experienced professionals getting our hands dirty developing and launching lifestyle brands that are available at a national level at an affordable price. We want everyone to have the opportunity to drink great bourbon at a fair price and worked tirelessly to launch it during the pandemic. Six months in, Puncher’s Chance™ Kentucky Straight Bourbon is going strong and routinely sells out. While that is a good problem to have, we are bottling as fast as we come to remedy it!

SZ: Puncher’s Chance came strong out of the corner, shipping nearly 10,000 6-bottle cases and 30 Private Barrels at cask strength (115- 122 proof) in its first four months of sales. Why do you think people so quickly took to the bourbon?

UL: The private barrel program kicked off with Liquor Barn, one of the leading retailers in Kentucky, and Wolf Spirit is on track to ship more than 200 private barrels of Puncher’s Chance™ in 2021.

During times of economic struggle consumers turn to what is familiar; and to Americans there is nothing more familiar than bourbon. At the same time, I think we were successful in making our bourbon stand out on the shelves with an eye-catching bottle, as well as standing out on social media by way of our partnership with Bruce Buffer, “The Voice of the UFC Octagon.” Bruce is an entrepreneur and entertainer, so knows the ins and outs of building a brand plus has a unique ability to rile up interest and attention. I have to say his network is amazing: through friendship alone we’ve had endorsements from Guy Fieri and Mike Tyson, just to name a few.

Beyond the marketing efforts, Puncher’s Chance™ also has gained high praise since it’s mid-pandemic release. Most notably we won a Gold Medal this year at the San Francisco World Spirits Competition, which is among the most respected international spirits competitions and the largest event of its kind in the U.S.

UL: Our success is made possible by our resilient team of crazy yet professional misfits who genuinely believe that we are creating something special, and that the harder you work, the luckier you get.

SZ: What’s next for Puncher’s Chance? Will we be seeing any additions to the core range or limited edition releases in the near future?

We are releasing a very limited edition 12-year-old Tennessee bourbon later this year, in a great cask finish that we are keeping secret for now!