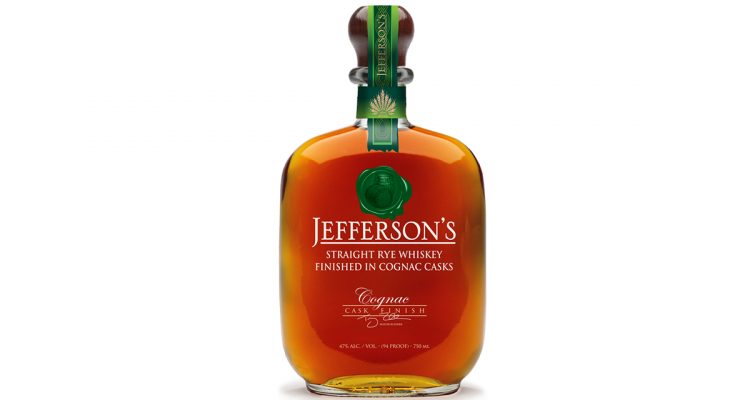 Jefferson’s Bourbon has released Jefferson’s Rye Cognac Cask Finish Whiskey. The new offering from the Kentucky Artisan Distillery is just the second rye released in the history of the brand, the first came in 2008.

Jefferson’s Rye Cognac Cask Finish is a double-barreled straight rye whiskey, which was fully matured before being finished in hand-selected Cognac casks for between nine and 19 months. The Cognac finish adds complexity and depth to the typical one dimensional character of the spice of rye whiskey. The typical dryness on the finish is replaced with a thick mouth feel and honey and orange.

On the nose, the rye offers aromas of cinnamon and honey. The palate features spice, nutmeg, and citrus. The finish is described as extremely long with oranges and honey.

“I wanted to look at rye through a new lens and elevate it past the supporting role it’s commonly associated with,” said Jefferson’s Bourbon Founder Trey Zoeller. “The spirit’s spice and character have historically made it an ideal base for cocktails, but Jefferson’s Rye Cognac Cask Finish is just as well-suited for sipping.”

Founded in 1997 by Zoeller and his father Chet, Jefferson’s Bourbon is a collection of whiskeys made in small batches. The brand’s core range is made up of three whiskeys: Very Small Batch, Reserve, and Ocean.