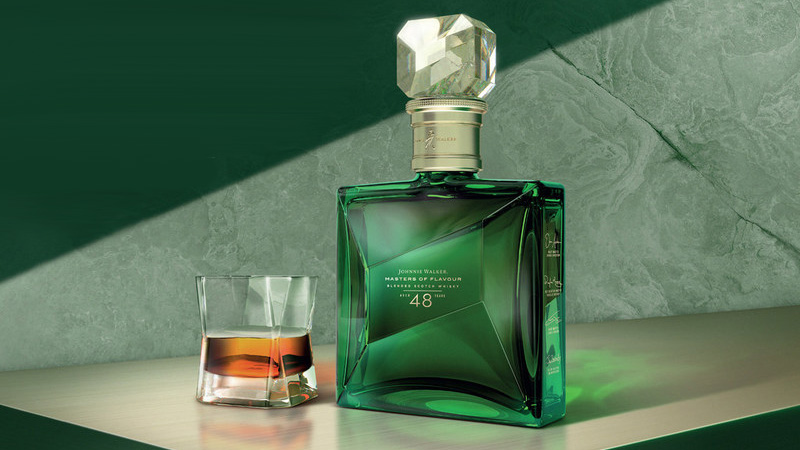 Johnnie Walker has launched the third and final whisky in its Masters series, Johnnie Walker Masters of Flavour. The new extremely rare Scotch celebrates the fine art of whisky making.

“It is fascinating to craft a Scotch that pays tribute to each of the four main steps in whisky making – malting, distilling, cask maturation and blending – to shine a light on how each craft contributes something very special to the extraordinary flavours that Scotch has to offer, from grain to glass,” said Johnnie Walker Master Blender Jim Beveridge.

Crafted from some of the finest maturing whiskies in the iconic brand’s reserves, all of the whiskies used to create Johnnie Walker Masters of Flavour are aged for at least 48 years. To create the extremely rare expression, Jim brought together three masters of the whisky world who he has worked with over many years, Malt Master – Donna Anderson, Cask Master – James Carson, and Distillation Master – Douglas Murray, to create something that paid tribute to the skill of whisky making.

“This incredible blend showcases how masters of the art of whisky making combine generations of Scotch knowledge and craftmanship with their own expertise of malting, distillation, cask maturation and, of course, blending, to create a truly exceptional Scotch.”

For Johnnie Walker Masters of Flavour, Jim worked closely with his team of expert whisky makers to hand select fleetingly rare expressions from the iconic “ghost” distilleries of Glyn Albyn, Port Dundas, Brora and Glenury Royal, balancing them together with the iconic distilleries of Cameronbridge, Blair Athol, and Dalwhinnie.

“By nurturing close relationships with malt, distillation, and cask masters throughout Scotland, a blend master contributes to creating a unique collaboration of craftmanship in service of making exceptional Scotch, these are relationships that we have nurtured through 30 years of working in whisky,” added Jim. “It’s an honour to pay tribute to those experts.”

On the nose, Johnnie Walker Masters of Flavour offers soft and gentle smoke, reminiscent of seaweed and salty air, which gives way to rich dried fruits. Notes of molasses linger with leather- before smoke gently weaves back through the senses. These aromas give way to rich fruit flavors bursting with currants before a gentle spice starts to build on the palate. Cinnamon-infused apples combine with star anise, crushed peppercorn and warming oak embers, enveloped in waves of baked caramel and rich butterscotch before culminating in a gentle and warming smoke in the finish.

For more information, head over to Johnnie Walker’s official website.

At the end of the year, Johnnie Walker has announced that Dr Emma Walker will take over the reins from Dr Jim Beveridge OBE, who is retiring after more than 40 years at Diageo, 20 of which as Master Blender.