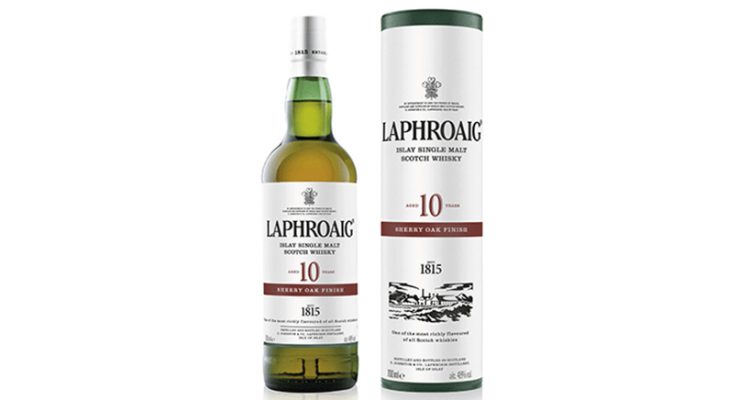 Laphroaig has added a 10 Years Old Sherry Oak whisky to its core range. The new offering follows a recent trend from the Islay distillery started by the October launch of the Ian Hunter Story Book Two 30 Year Old Whisky, which has aged for three decades in Spanish Oak Oloroso Sherry casks.

Laphroaig 10 Years Old Sherry Oak was matured in refill oloroso Sherry and American oak ex-Bourbon casks, before finishing for 12 to 18 months in European oak oloroso Sherry casks. The single malt whisky is said to have notes of manuka honey, bacon and maple syrup, combined with smoke, seaweed, and a hint of salt.

“We are so excited to announce the release of our unique and premium expression, Sherry Oak, taking our iconic Laphroaig 10 Years Old and finishing it with the sweet flavours of oloroso Sherry cask,” said John Campbell, Laphroaig distillery manager. “This is a perfect accompaniment to any whisky collection and a celebrated addition to the Laphroaig range.”

The Ian Hunter Story Book Two 30 Year Old Whisky is the second release of the distillery’s Ian Hunter Series and is a tribute to the Icon that Ian Hunter built more than 100 years ago.

Back in August, Laphroaig’s 2020 Cairdeas Port & Wine Casks Single Malt Scotch Whisky. Usually, the Beam Suntory-owned distillery releases its annual Cairdeas expression in late May to coincide with the Feis Ile Festival, but, due to the global pandemic, the 2020 Feis Ile was cancelled and Laphroaig delayed the launch. No news on the 2021 edition of the iconic offering has been released at this time.

In January, it was announced that the 2021 edition of Islay’s Feis Ile festival will be held online this year due to uncertainty created by the ongoing COVID-19 pandemic.