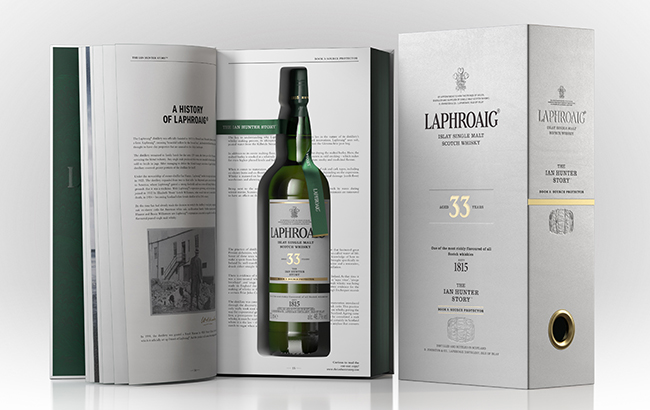 The Ian Hunter Story series honors the last member of the founding Johnston family to run the Islay distillery. The collection is set to be made up of whiskies, each released annually.

Laphroaig Ian Hunter Story Book Three: Source Protector is a 33-year-old whisky from 1987 that has been matured in ex-Bourbon barrels. The single malt charts the history behind the Kirkbride stream. Following a long-running dispute, Hunter purchased the land leading up to the source of the stream to ensure the distillery would be powered by steam.

On the nose, the Scotch offers notes of pears, peaches and apricots. The palate delivers aniseed and liquorice.

“You cannot enjoy Laphroaig’s exquisitely smoky and complex liquid, without paying homage to the legendary Ian Hunter,” said John Campbell, Laphroaig distillery manager. “His influence in our whisky production techniques and our iconic brand as a whole is undeniable. The third book in our Ian Hunter Story celebrates his legacy in shaping Laphroaig to what it is today.”

The first bottling in the series, Book One: Unique Character, paid homage to Hunter’s decision to introduce American white oak barrels to the maturation process at Laphroaig. Book Two: Building an Icon, meanwhile, was matured in Sherry casks for 30 years and marks Hunter’s work on expanding the distillery.

The limited edition whisky is available from Laphroaig’s official website and specialist retailers for£920, $1,250 USD, and €990.

Earlier this month, Laphroaig unveiled the 2021 editions of its 10-year-old and 25-year-old cask strength single malts. Part of batch 13, both whiskies have matured in ex-Bourbon casks.