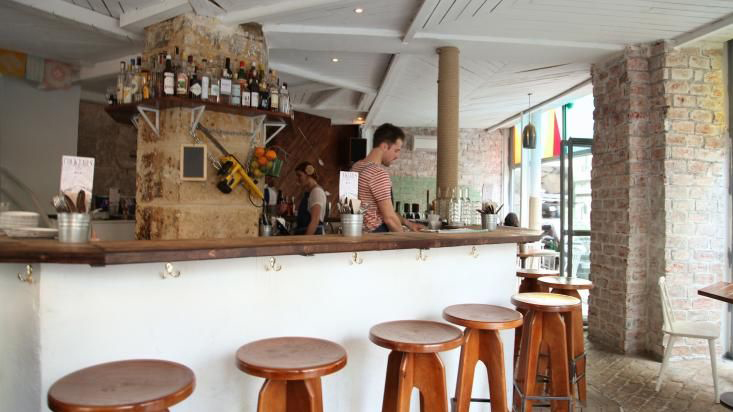 Located at the point of a triangular corner in Paris’s fashionable Marais district, Le Mary Celeste has a vague nautical theme, plenty of bar seating, and the kind of dark, cozy interior that makes visitors feel like they’re in the know. White-washed wood walls are highlighted by pastel tones, and, unlike most maritime-influenced taverns, there isn’t much kitsch. It’s choice in decor is decidedly minimalist, which is good considering the close quarters.

The place bustles from open till close. Oysters are shucked behind the bar, while impressive small dishes circle throughout the space. Plates change frequently, but visitors will likely find a mix of seafood and French-inspired fare like foie gras and pain Mediterranean (a sort of flatbread covered in tomatoes and spices from the southern part of the country).

Le Mary Celeste–and Quixotic Projects for that matter–is known for their cocktails, and the place certainly does not disappoint. The menu presents drinks with a short ingredient list and a thoughtful description, such as this one from Pablo Picasso, “Art is a lie that allows us to reveal the truth,” that falls under the Hellmouth (Mezcal Union infused with fresh ginger and long pepper, amaro Rabarbaro Nardini, Kina L’aero D’Or Cinchona, capillary, lime, Angostura bitters).

Those more interested in wine will be happy to know that Le Mary Celeste also happens to be one of Paris’s finest natural wine bars. Visitors can order from a selection that is mostly local to France, but has a few bottles from Spain and Italy.

Le Mary Celeste has seemingly everything. The cocktails are some of the city’s best, the small bites border on extraordinary, and the space seems to create its own sense of floating revelry.