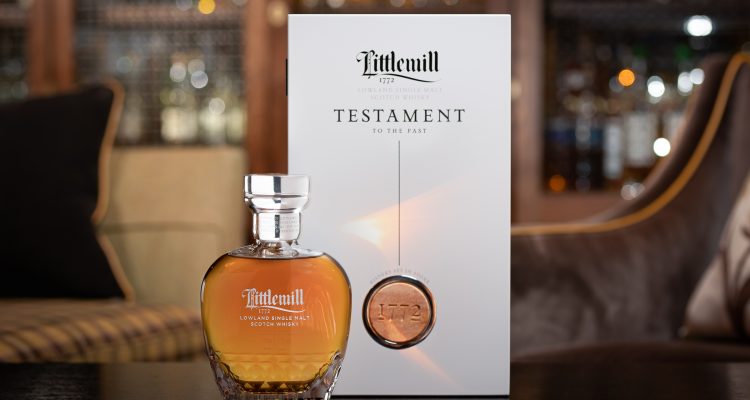 While it has been almost two decades since Littlemill Distillery was destroyed by fire and demolished, it’s still managing to make serious waves. Some of the iconic Lowland distillery’s last casks are in the hands of the Loch Lomond Group, and they have now added to the storied legend with the release of Littlemill Testament 1976, which is priced at £8,000 (nearly $11,000 USD).

Littlemill Testament 1976 is the oldest release from the distillery to date. It was first distilled in October of 1976 and re-casked in American oak hogsheads in 1996. Master blender Michael Henry then vatted three of the casks into two first-fill oloroso sherry hogsheads for four months before blending the liquid together for two more months. Finally, it was bottled in December 2020.

Bottled at 42.5% ABV, just 250 bottles of Testament 1976 were created. Each is crafted in hand blown Glencairn crystal, which have been facet cut at the base, mirroring the style of glass cutting during the Georgian period, and housed in a bespoke handmade cabinet.

Each cabinet comes complete with a dress stopper made from the sandstone taken from the remains of the Littlemill distillery. Finally, for collectors who wish to leave the decanter untouched, each comes with a unique code allowing the owner to claim a 5cl of the precious liquid. An additional 5cl can be claimed at a future date, using the same code, protecting the investment by allowing a second owner to claim their 5cl to enjoy.

On the nose, the Whisky offers aromas of crisp green apple and zesty grapefruit with fragrant elderflower and ginger. The palate delivers fresh, vibrant fruit, tangy pineapple, and juicy peach with lime citrus. There is a melted brown sugar sweetness, some dried peel and creamy vanilla. The finish is described as long with mouth-watering fruit, gooseberry, and watermelon, then gently warming cinnamon and nutmeg spice.

“Littlemill Testament is a fitting tribute to the rich heritage that this exceptional whisky enjoys, allowing whisky lovers to own a piece of history,” said Colin Matthews, CEO, Loch Lomond Group. “I would like to congratulate our Master Blender Michael Henry for crafting such an exceptional liquid which perfectly reflects the Littlemill’s signature floral style.

“In addition to our Limited Edition release, it is a pleasure to also reveal our four unique Littlemill Testament decanters, which offer the ultimate tribute to Littlemill’s fascinating past.”

Michael Henry commented: “It is an honour to have been able to play my part, as current custodian of the remaining casks from the original Littlemill Disitillery, and release Littlemill Testament, which pays homage to this whisky’s unrivalled history. I’m very proud of the result, which perfectly capture Littlemill’s signature style.

The exact origins of Littlemill are unknown, but some claim distilling had been taking place there since the 14th century. According to the distillery itself, “on the 2nd of November 1773, local Justice of the Peace records for Dumbarton show that ‘Robert Muir of Littlemiln’, an employee, was granted the first ever licence by the Government of King George the 3rd to “…retail ale, beer and other excisable Liquors.”” The distillery changed hands many times over the years, and was the property of Jane McGregor, one of the earliest female distillers, between 1825-39.

Unfortunately, the distillery fell on hard times during the 1980s and was silent for a time. Re-opening after a management buy-out in 1988, it fell silent for the final time in 1994. The warehouses were demolished in 1995 and in 2004 a fire destroyed most of the rest of the distillery. The remaining buildings were levelled in 2006.

Littlemill Testament 1976 Scotch whisky is currently on sale and can be purchased via The Whisky Exchange.