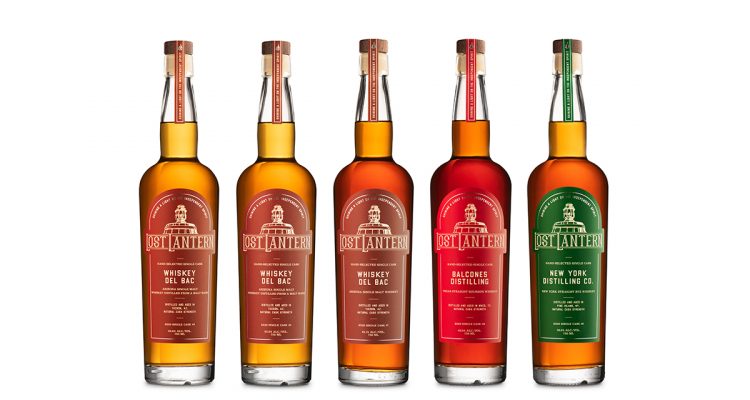 Lost Lantern has announced its Spring 2021 release of limited edition single cask Whiskeys. The new collection follows the American independent bottler’s first single cask release, which was unveiled in winter 2020. Less than 20% of the first three casks from the Winter 2020 release remain available for purchase.

Beginning April 12, the Spring 2021 release, consisting of five new single casks, will be offered for purchase via Lost Lantern’s official website and at select retailers in Kentucky and Southern California:

Single casks are an essential piece of the Lost Lantern model, inspired by the long tradition of independent bottlers in Scotland. These highly limited, one-of-a-kind single casks consist of unique and deeply expressive whiskeys produced by some of the finest distilleries in the United States.

Of special note is a triad of casks (#5, #6, #7) from Arizona’s Whiskey Del Bac. Lost Lantern Co-Founders Nora Ganley-Roper and Adam Polonski specifically chose this trio to highlight some of their favorite aspects of the range of mesquite-smoked whiskies produced by the distillery.

“This is a unique opportunity to present a comparison of the casks coming out of Whiskey Del Bac,” commented Nora and Adam. “We think you can learn a lot about a distillery by trying several single barrels side-by-side, and the variety of flavors seen in these casks shows just how pronounced those differences can be, both as a result of different cooperage and simple barrel-to-barrel variation.”

Each season, Lost Lantern will debut a new collection of single casks, and may announce one-off limited releases from time-to-time.

The whiskey for each of these three single casks from Whiskey Del Bac in Tucson, Arizona was made from 100% malted barley, 60% of which was smoked with mesquite wood. The distillery’s founder, Stephen Paul, used to make ornate furniture out of mesquite wood before he began producing whiskey in the Sonoran Desert. Today, Whiskey Del Bac is recognized as a pioneer in the Southwest style of mesquite-smoked whiskies.

Cask #5 is the most savory of the three Whiskey Del Bac casks available. Aged in second-fill American oak, it has a leathery, smoky flavor, like burnt embers on a grill, but with a rich herbal note that keeps the whiskey in balance. Big, very smoky, and extremely distinctive.

Cask #6 is the most fruit-driven of the three casks available. Aged in second-fill American oak, it has a spicy, rich flavor, with hints of barbecued red fruit and a good deal of smoke. Tastes like a hot desert evening, or at least like you would enjoy drinking it on a hot desert evening.

Cask #7 was aged in a new American oak cask, unlike the other two Whiskey Del Bac casks. The result is that even after just one year in the desert, Cask #7 is the most oak-driven of the three and has an intensely spicy, herbal flavor, with bold oak and baking spice mingling with the mesquite smoke.

Balcones is a pioneer, not just in Texas Whiskey but across the board. Their experiments with mashbills, barrel finishes, barrel sizes, and new techniques have helped break new ground in American whiskey.  This single cask of straight bourbon whiskey is produced from 100% Texas-grown roasted blue corn, an unusual mash bill for a bourbon. It’s aged for two years in a 60-gallon new American oak cask  in the Texas heat, and tastes like charred, buttery corn-on-the-cob dipped in maple syrup.

New York Distilling Co. is one of the nation’s premiere craft distilleries championing the rebirth of cool climate rye whiskey in the Empire State. This single cask was mashed, fermented, distilled, barreled and aged at New York Distilling Co’s Pine Island distillery. A truly distinctive cold-climate rye whiskey, Cask #9 is sweet and aromatic, evoking chocolate-covered Turkish delight. Unlike the apple brandy cask-finished Winter 2020 release (Cask #3) from NYDC, Cask #9 is straight rye whiskey without a finish that has been aged for four years in a 53-gallon new American oak cask.

In addition to the new single cask releases, Lost Lantern’s flagship blend, American Vatted Malt Edition No. 1 remains available. We caught up with Nora and Adam to chat about the release in a Bottle Breakdown earlier this year.