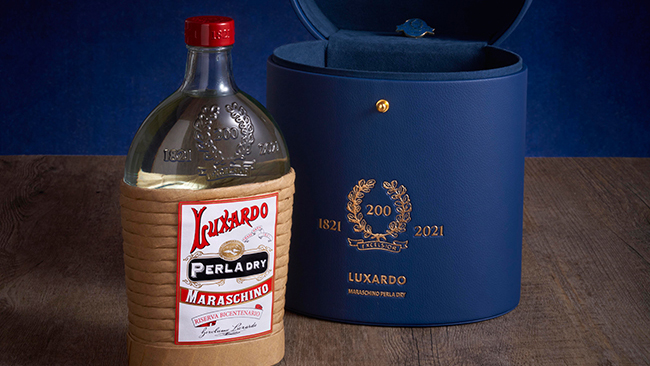 The Luxardo Maraschino Perla Dry Bicentenary Reserve is a “special reserve” of the brand’s iconic cherry liqueur. Perla Dry was last made in the 1970s in very limited quantities. Bottled at 40% ABV, the new edition contains less sugar than the original.

The liqueur comes in an antique green-blue glass bottle, and a gift box with a booklet and a commemorative pin. Just 4,999 bottles of the Maraschino Perla Dry Bicentenary Reserve will be made available, with 1,500 of those reserved for Italy.

Founded in 1821 by Girolamo Luxardo, the still family-owned company sells products in 83 markets worldwide, with a major presence in the liqueurs, candied cherries and confectionery sectors. It is based in Torreglia, Italy.

In other Italian liqueur news, Molinari has released a limited edition Sambuca bottle to celebrate its 75th anniversary. The new vessel from the Italian liqueur maker is designed by illustrator Olimpia Zagnoli, who has previously made artwork for The New Yorker, Apple, The New York Times, Guggenheim Museum, The Guardian, and La Repubblica.

The new 75th anniversary Molinari bottle features an array of colourful silhouette figures arm in arm. According to the company, the bottle design highlights the Italian brand’s core values, including sociality and sharing.

In October, Pallini Limoncello was finally made available in the United States, thanks to a new partnership with Lucas Bols USA. The family-owned Italian brand is Rome’s only remaining spirit producer.

Founded in Abruzzo, Italy in 1875, Pallini’s signature Limoncello is a natural liqueur made from Sfusato lemons, exclusive to the Amalfi coast, and is the fastest growing limoncello brand in the world. Pallini also makes Limoncello Cream, Peachello, and Raspicello.