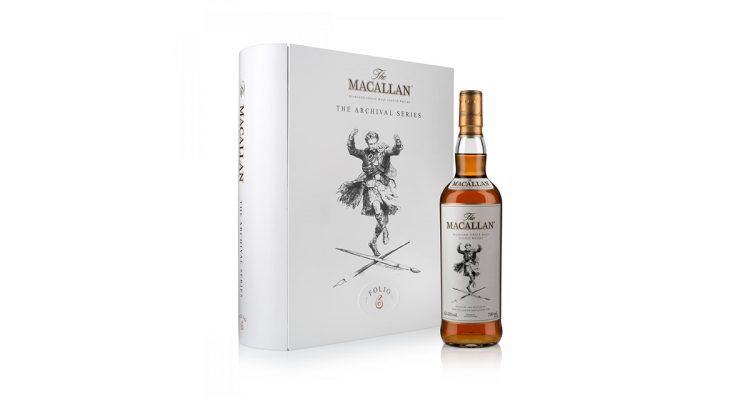 The Macallan has launched Folio 6, the latest addition to its Archival Series. The new Whisky will be available exclusively from airports in Dubai, London, and Taiwan.

The new release highlights a 1984 Macallan campaign, which tells the story of Allan Shiach, the brand’s chairman at the time. In it, he is portrayed doing a sword-dance over a crossed brush and pen.

“Crafted to pay tribute to the playful sword-dancing Chairman advert of the 1980s, Folio 6 is a captivating single malt whisky which truly reflects the iconic status of the artwork it celebrates,” said The Macallan whisky maker, Polly Logan.

She added, “Autumnal auburn in colour, The Macallan Archival Series Folio 6 presents seasonal aromas of orange and ginger followed by poached pear and vanilla with celebratory hints of cinnamon, nutmeg, fresh oak and chocolate. On the palate, oranges and sultanas dance with ginger and soft milk chocolate. While the finish brings a crescendo of ginger warmth that makes this the perfect dram to enjoy whether you’re dancing at the ‘ceilidh’ or sitting by the fireside.”

Shiach was also one of three characters celebrated in The Macallan’s new Red Collection,

Bottled at 43% ABV, The Macallan Folio 6 is available exclusively from the brand’s boutiques in Dubai International, London Heathrow, and Taiwan Taoyuan airports beginning in the first quarter of 2021. It is priced at £250 ($341 USD) and comes with a booklet and a book-shaped tin.

In November, The Macallan unveiled Distil Your World: The London Edition Whisky. The new limited edition single malt was created to deliver “a sensorial journey through one of the world’s greatest capital cities.”

In October, the Macallan unveiled the newest addition to its iconic Fine & Rare Collection, The 1993 Edition. The new expression from the Speyside Distillery joins a collection that started 20 years ago and features Whiskies from eight decades, 1926 to 1993.