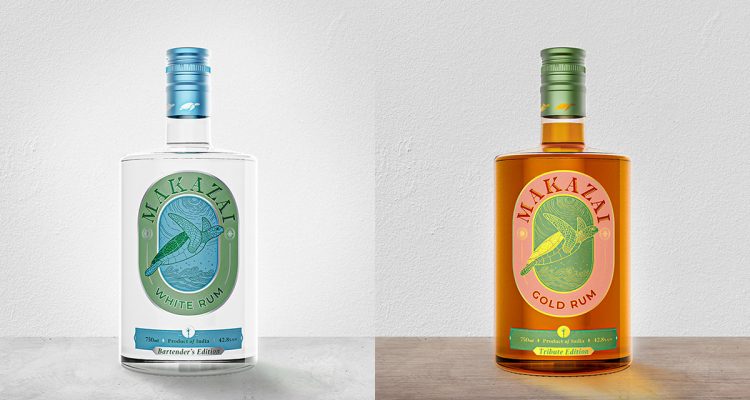 A new Indian Rum that has hit the shores of Goa. Makazai Rum comes by the way of Kasturi Banerjee, a former banker, and has been released in two expressions, Bartender’s Edition (White) and Tribute Edition (Gold).

“Maka zai translates to ‘I want’ from Konkani,” Banerjee told Conde Nast Traveller India. “The rum is a fully made-in-India product and we wanted that aspect to stand out in our offering. We’ve all grown up on Old Monk, but beyond that, what else does India have to show for rum? Right from the packaging and design to the ingredients, everything is straight out of India.”

Makazai gets its molasses from west India, the bottles are manufactured in Firozabad, while the caps come from Meerut. The turtle mascot on the packaging too is a hat tip to the locals—Olive Ridley turtles that come to Goa’s shores to hatch their eggs. “They’re one of the oldest inhabitants of the state and have such a focused and unique birthing process. The Olive Ridley turtle embodies everything that Makazai stands for–focus, resilience, dedication and determination,” she told the publication.

Makazai Rum comes in White and Gold expressions. The Bartender’s Edition is the White Rum offering, while the Tribute Edition is the Gold Rum option. The former is “dedicated to bartenders around the world, who are often less celebrated as compared to chefs, but play an important role in you having a good time when you’re out on the town,” says Banerjee.

Makazai Bartender’s Edition is light and floral, with herbaceous hints of sugarcane. It’s a smooth, medium-bodied spirit, that is extremely sippable, even just on the rocks. Banerjee recommends enjoying it in a cocktail like a daiquiri or pairing it with ginger ale, pomegranate juice or kombucha.

Makazai Tribute Edition is the more premium of the two. It features a creamy mouthfeel and notes of praline, fig and honey. Tribute is a blend of molasses spirit and an oak barrel-aged rum. The spirit is best enjoyed in a Mai Tai, according to Banerjee.