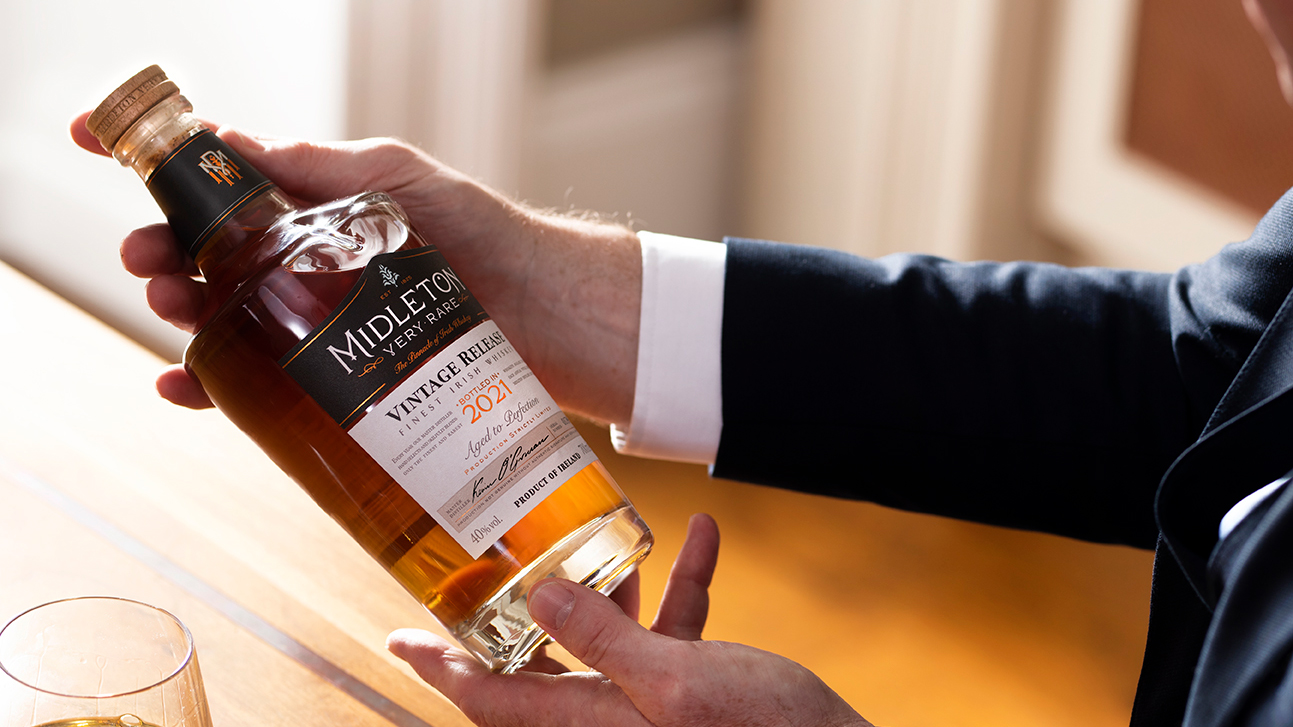 The Midleton Very Rare legacy began over four decades ago when the then masters began setting aside small amounts of exceptional whiskey for a new luxury offering. Since then, Midleton Very Rare has grown to be known as the pinnacle of Irish whiskey. In keeping with tradition, Midleton Very Rare 2021 is a balanced blend of rare and hand-selected single pot still and single grain Irish whiskeys from Midleton’s extensive inventory. It includes whiskey aged between 15 and 36 years and matured in lightly charred ex-bourbon American oak barrels.

Making his first selection as Master Distiller, Kevin O’Gorman took several months to explore the various casks in Midleton’s inventory as he looked to put his own mark on his first annual limited-edition release. Drawing on his experience in both distillation and maturation, O’Gorman elevated the grain whiskey contribution for the 2021 vintage to create a delicate and elegant whiskey. In order to maintain a luxurious, balanced aroma and taste profile, O’Gorman selected a mix of first fill and second fill casks to enhance the wood contribution while allowing the pot still component to express itself.

The result is a whiskey of great finesse, with a floral, perfumed character. The higher selection of grain whiskeys extends the spectrum of flavors and aromas to include baked orchard fruits, lime zest and kiwi, perfectly rounded off with mild pot still spices and soft waves of vanilla from the exceptional bourbon casks.

On the nose, the whiskey opens with a delicate floral perfume closely followed by roasted coffee beans, salted caramel and honeycomb coming to the fore. Hints of nectarines that linger in the background evolve over time along with freshly grated ginger and nutmeg spice. The American oak provides structure throughout, ranging in depth from fresh woodland notes to aged charred oak.

The palate features baked orchard fruits with a touch of lime zest and kiwi. Mild pot still spices continue to build along with soft waves of vanilla, sweet coffee liqueur and cocoa powder. The texture initially round and full, gains additional wood spices with a delicate touch of clove oil and nutmeg adding a mild heat, giving balance to the sweetness.

The finish features pot still spices and soft fruits, which eventually fade allowing the oak to have the final say, highlighting the many years of maturation.

“It is an honor to join my predecessors in bringing the Midleton Very Rare collection to life,” remarks O’Gorman, who is just the third master distiller to oversee this collection. “The process has allowed me to explore our rarest casks to create an exceptional blend that builds on tradition while bringing a new dimension and we’re thrilled to bring this release to our customers in the US.”

Midleton makes some of the world’s most exclusive and sought-after Irish whiskies, ranging from its Silent Distillery releases, including the recently announced Chapter Two, to its annual Vintage Releases. Bottled at 40% ABV, Midleton Very Rare 2021 is now available in the United States online and in fine retailers across the country for $220.

For more information, head over to the Midleton Very Rare official website.