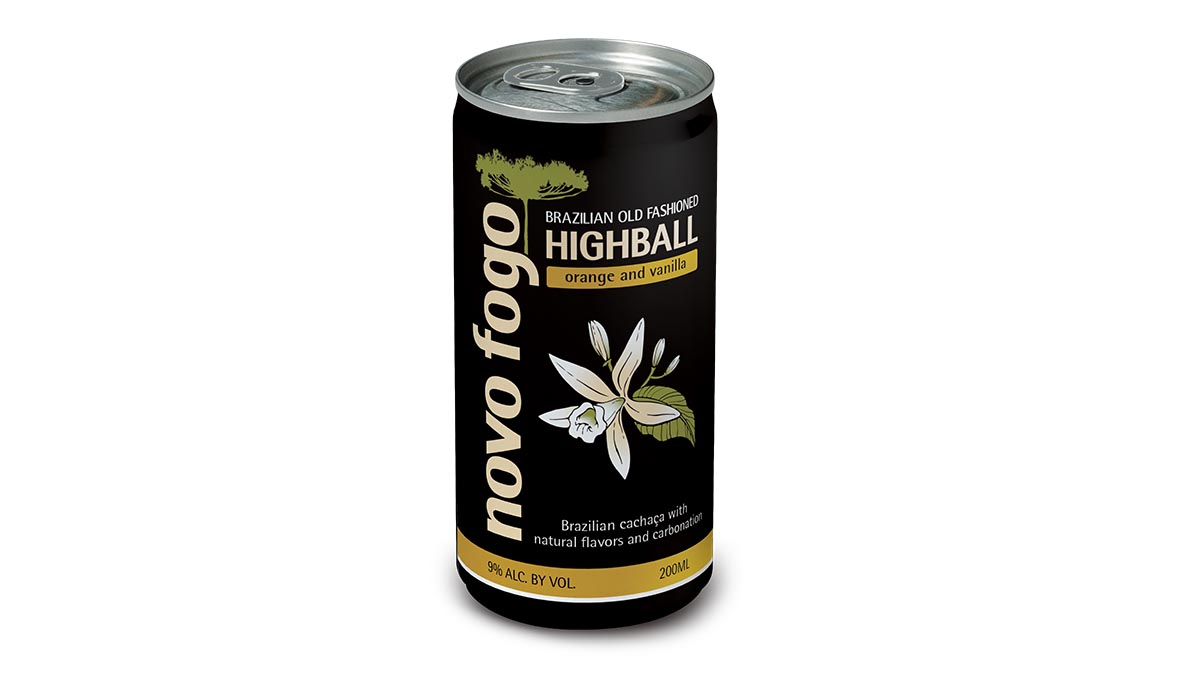 Novo Fogo Cachaça has announced the release of its first aged-cachaça based canned cocktail, the Brazilian Old Fashioned Highball. The new release is the latest offering from a vision that began in 2017 with the launch of the brand’s Sparkling Caipirinha RTD line.

The Novo Fogo Brazilian Old Fashioned Highball is composed of Novo Fogo Chameleon cachaça (aged one-year), vanilla syrup, orange and aromatic bitters, and is lengthened with water and then carbonated, in the style of a highball. “Just as the original caipirinha RTDs help promote silver cachaça into new sales channels, this new expression seeks to support the growth of barrel-aged cachaça into mass retail,” says the brand.

The new drink intersects classic cocktails from both sides of the equator. The tropical adaptation of the world’s most popular cocktail serves as a bridge between rum and whiskey drinkers and is designed to appeal to everyone. The addition of carbonation defies seasonality, and the flavor profile combines floral and rugged oaky notes. It may be served straight from the can (chilled) or over ice in a glass.

“We designed this canned cocktail as a dichotomy mediator for the spirits industry, a very relevant metaphor for today’s world of perceived divisions,” says Novo Fogo’s CEO, Dragos Axinte. “In a world that is increasingly shedding labels, this drink transcends categories, appeals to broader audiences, and represents Novo Fogo’s double heritage: South and North America. It makes a statement that Novo Fogo stands for unity.”

Novo Fogo is an award-winning Brazilian cachaça producer that handcrafts its spirits in small batches at a zero-waste distillery at the edge of the Atlantic Forest in Brazil’s southern state of Paraná. Crafted by Master Distiller Dr. Agenor Maccari, Jr., one of Brazil’s foremost agronomists, distillers and barrel-aging experts, the one-year aged Chameleon cachaça serves as the base spirit in the Brazilian Old Fashioned Highball.

The nose is dominated by the scent of Novo Fogo’s Brazilian adegas, the underground rooms where the organic sugarcane cachaça is aged in oak barrels that once held bourbon in Kentucky. The palate features bittersweet orange, the green but elegant pods of vanilla orchids, and the dry minerality of Paraná’s red dirt. The finish offers cinnamon bark and sun-worn leather.

The Novo Fogo Brazilian Old Fashioned Highball cans are distributed nationally by 375 Park Avenue Spirits, a division of the Sazerac Company. The RTD cocktails arrive at 9% ABV and contain 145 calories and 12 grams of carbohydrates. The cocktail is served in 200ml cans at a higher alcohol content than most RTDs for a presentation closer to the original Old Fashioned identity. They are available nationwide and online at a suggested retail price of $2.99 per 200ml can and $11.99 for a four-pack.

For more information, head over to Novo Fogo’s official website.

In July, Novo Fogo Cachaça released a new, high-proof silver cachaça in a 1-liter bottle format designed for the bar community. Novo Fogo Bar Strength Silver Cachaça has been reformulated specifically for the service industry in an effort to find the perfect intersection between high-quality spirits and cocktail menu costs.