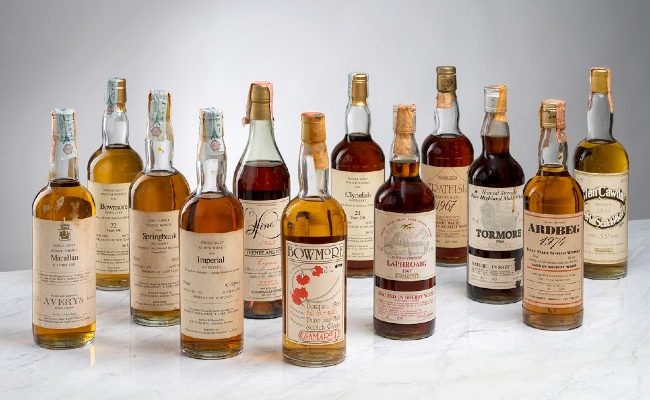 Good news for enthused drinkers with a taste for the finer things in life. A collection of no less than sixty rare Scotch whiskies from Silvano Samaroli and Corti Brothers will go under the hammer via Whisky Auctioneer this month.

The lots from the renowned independent bottlers will go under the hammer from 17th to 21st of June 2021. The online auction will showcase whiskies from famous collector Emmanuel Dron’s personal stash.

Samaroli was an Italian importer and bottler, whose whiskies are especially highly coveted today.

Among the Samaroli whiskies up for action, a number of which have been autographed by Samaroli himself, will be: a 1967 Strathisla, 1967 and 1970 Laphroaig bottlings, a 1951 Glen Cawdor (Springbank), and the 1966 Bowmore Bouquet.

During the 1980’s the Corti Brothers of Sacramento imported Scotch to the USA for bottling and distribution, and amongst those from the brothers’ portfolio heading up for auction are a very rare 1965 Clynelish and bottlings from Balmenach and Imperial, distilled in the 1960’s.

“This collection is a magnificent example of some of the finest and most collectible independent bottlings in existence.

“What’s special about Emmanuel Dron’s collection is that these bottles have unparalleled provenance. Whiskies with such an impeccable source are hard to come by.

“This auction will present an opportunity for collectors worldwide to own a piece of whisky history – from unique spirit distilled in the 1960s to some of the finest bottles ever produced from distilleries including The Macallan, Bowmore, and Laphroaig.”

Check out the auction over at Whisky Auctioneer.

In April, a legendary bottle of Old Ingledew bourbon, which happens to be the world’s oldest known whiskey, is set to go under the hammer this summer. Skinner Auctioneers states that the bourbon—which is estimated to sell for $20,000 to $40,000—was purchased by John Pierpoint Morgan during one of his frequent visits to Georgia in the late 1800s. At the time, it would have been stored in a demijohn: an ovular glass vessel usually measuring around 15 gallons in volume.