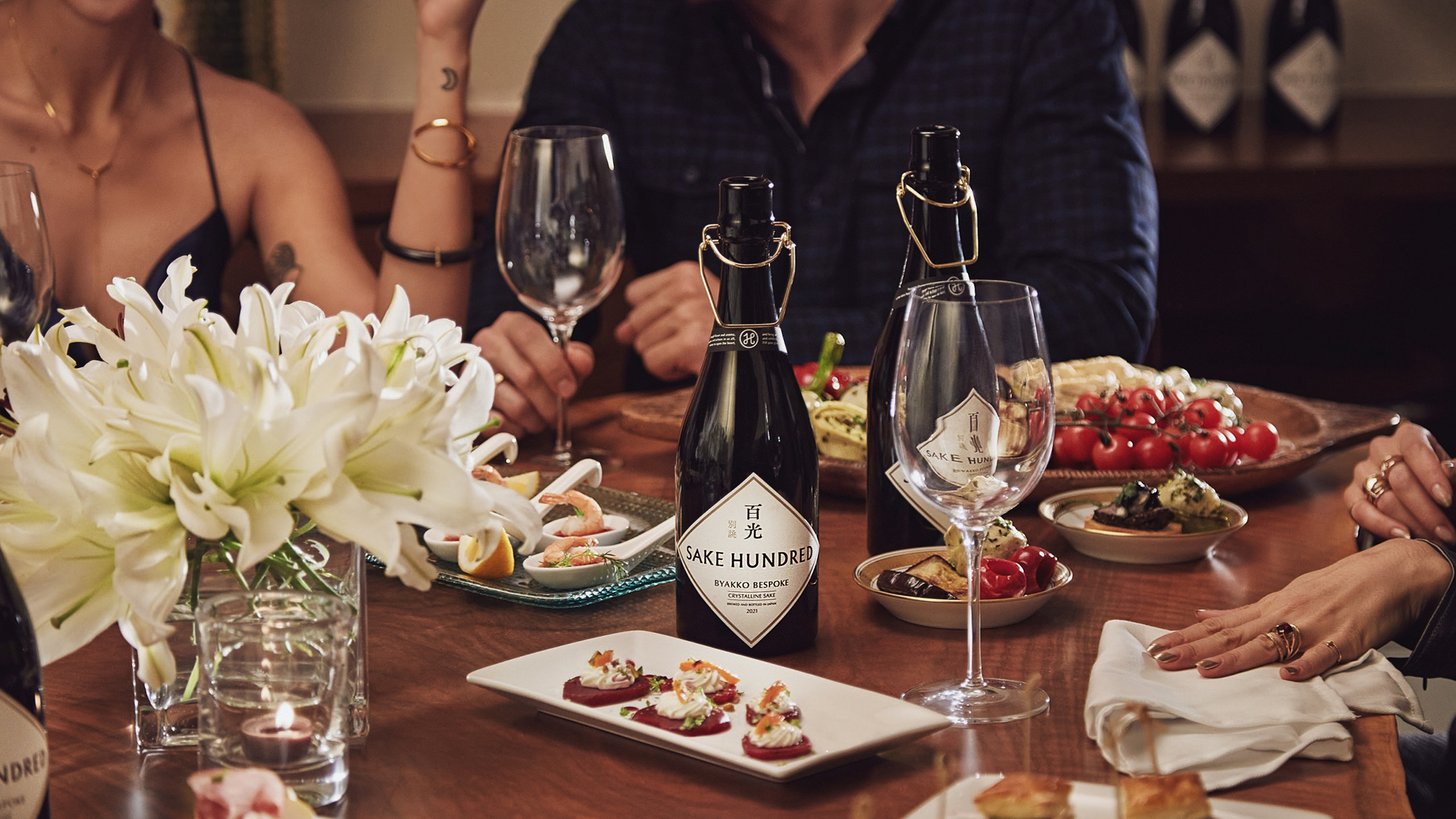 Sake has a tradition that stretches over 2500 years. The highest quality ingredients and obsessive attention to detail lead the fermented rich-based alcoholic beverage to reach levels of artistic expression and craft precision that are usually reserved for fine wine and luxury automobiles. Yet, in the United States, sake hasn’ managed to find its foothold in the luxury market. Enter Sake Hundred.

Sake Hundred has arrived in the US looking “to elevate the sake drinking experience to rival that of a fine wine or high-end Japanese Whisky, leading to a new class of sake buyers,” says a press release.” Founded in Japan in 2018 by sake connoisseur and founder of Japan’s Saketimes Ryuji Ikoma, the new brand’s mission is to reshape people’s perspective of sake globally and expose drinkers to the most outstanding examples of Japan’s national drink, showcasing its many styles and sophisticated complexities that allow it to pair with a myriad of cuisines well beyond that of simply sushi.

While working to make Saketimes the ultimate sake resource, Ikoma visited hundreds of sake breweries throughout Japan in an effort to understand, and report on, the varieties, the techniques and the culture of sake making, but more importantly the people who for generations have had it in their blood. It was this journey that would later inspire Ikoma to create his own portfolio of sakes for a new generation of imbibers. To do so, Ikoma recalled his research tasting thousands of iterations of sake leading him to select those breweries he would partner with for the production of Sake Hundred’s sakes. His exhaustive search over six years yielded a portfolio representing a variety of ingredients and fermentation techniques, all celebrating the storied history and deep culture of sake, while infusing individual character in each that would appeal to a new, more sophisticated palate.

“Our collection of sakes will take drinkers through a journey of both culture and taste, two elements that are closely intertwined in sake making. You can taste the personality of the sake brewer in our sake, just as you can taste the terroir of a fine wine,” noted Ikoma. He added, “Each part of Japan has its own culture and there is no better way to get to know that culture than through sake.”

The flagship of Sake Hundred is Byakko Bespoke ($380), a balanced sake made from the “king of sake rice,” Yamadanishiki, at the Tatenokawa Brewery in Yamagata, Japan, which is known for high polish ratios and for making Junmai Daiginjos, the highest sake grade designation.  With a rare polish-ratio of  just 18 percent, requiring over 200 hours of meticulous milling, Byakko Bespoke has delicate aromas of white flowers, stone fruits and a particularly rich flavor.

Shirin ($435) is the brand’s oaked-aged sake, created by the Ouijiman Brewery, also in Yamagata, using Yamadanishiki rice polished to 18 percent and aged in Japanese mizunara oak for about two weeks. The resulting sake is fresh and creamy with an underlying toasty, smoky profile and a long finish.

On the other end of the spectrum is Amairo ($270), a dessert sake made at the Miyoshino Brewery in Nara by replacing a portion of the brewing water with sake, resulting in the drink’s sweetness and umami flavors, along with tart and savory notes.

In addition to these unique sakes, Sake Hundred will release the limited edition Gengai ($3,100), a 27-year-old sake originally conceived in 1995 by the Sawanotsuru Brewery in Hyogo, which was subsequently destroyed by the Kobe earthquake leaving the process unfinished. The surviving Shubo (starter and seed mash) was urgently pressed into sake, however it was too premature to create a drinkable finished product. With what can now only be described as incredible forethought, Sawanotsuru decided to age it to see if perhaps it could “grow” into a beautiful sake. Holding onto hope, the brewmasters tasted the aging “sake” each year with disappointing results until 25 years after the earthquake, when what is now Sake Hundred’s Gengai took on luscious flavors of caramel and chocolate over two decades of unanticipated aging. Not only was it finally ready, the flavor profiles were unlike anything they could have originally imagined.

Because Gengai is the result of a happy accident, only 500 bottles were released globally in 2021, 450 of which are sold in Japan, leaving only 50 to sell in the U.S.  Each year, the Sake Hundred team will continue to taste the aging sake and determine if a new allotment can be released. When the remaining supply is gone, it cannot, and will not, be produced ever again.

In developing the brand’s portfolio, Ikoma thought about the flavor profiles and characteristics he wanted for each of his sakes (water, rice, polish ratio) and using his extensive knowledge of Japan’s top breweries, chose a particular brewery that could excel in the production of each. Upon selection, Ikoma personally worked with each of the four brewery’s head brewer to formulate a unique product that reflected the signature style of the brewery, while pushing the overall flavor in a new direction. In traditional sake making, the goal is to have very subtle sake flavors as to not take the focus away from food. Contrary to that, Ikoma wanted to create sakes that were more flavorful with notable characteristics, while still allowing them to be paired with a broad range of food, ultimately pleasing a plethora of palates.

“We think that Sake Hundred will serve as the gateway for consumers to experience and enjoy sake,” says Ikoma. “And hopefully incorporate sake into their consumption habits alongside wine and spirits, perhaps even eventually enjoying sake more than the others.”

Already available in Japan, China, Hong Kong, Singapore, the UK, and UAE, the brand carries a track record to back up the brand’s lofty objectives in the US market. In its short tenure, the brand has already amassed industry recognition including winning awards at the 2019 Kura Master competition in France, the 2019 and 2020 International Wine Competition, as well as earning gold at America’s very own U.S. National Sake Appraisal in 2020.

Sake Hundred is set to debut in the US in June 2022 and will first be available at select restaurants, bars and retailers in New York, Los Angeles, and San Francisco, as well as online via the brand’s official website.