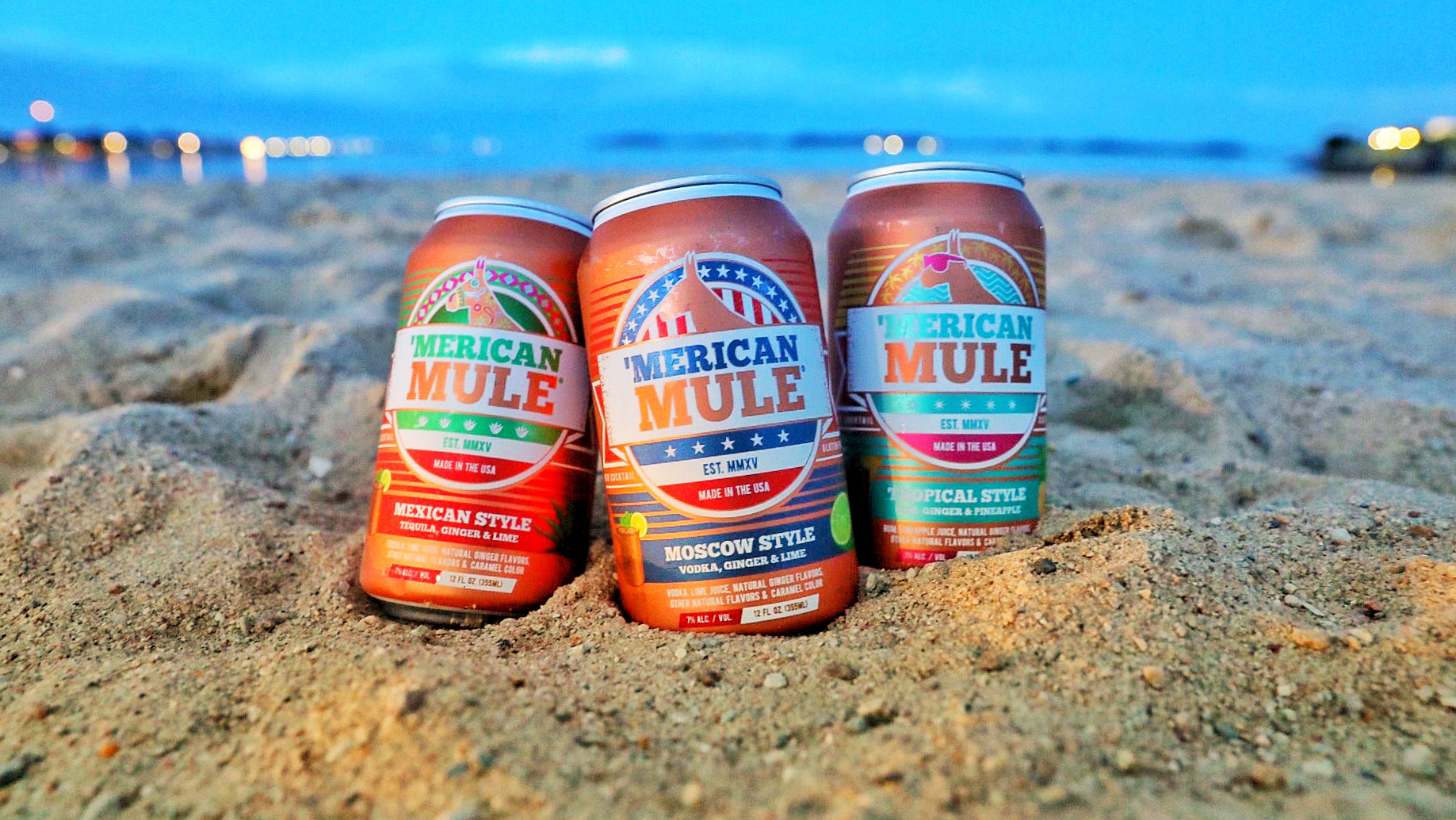 The Moscow Mule is a drink shrouded in mystery. Its origin is a matter of debate with both Los Angeles and New York laying claim to its provenance (though we’re pretty sure it’s L.A.). Either way, it’s that mystique along with Santa Monica’s trendy ocean vibes that first grabbed the attention of Dean Mahoney, Pete Weil, and Steve Pawlik, the minds behind Merican Mule, one of the world’s fastest growing canned cocktail brands.

It was at Santa Monica’s somewhat infamous Bungalow where the trio were “basically introduced to Mules,” says Dean. “We were working in New England in the tech field and then we got transferred across the country, my co-founders and I. Because L.A. is at the forefront of trends and what’s cool in pop culture, the first time we really realized how popular the Moscow Mule was, was at The Bungalow.

The trio began exploring bars around L.A. and trying different Mules, just because they liked them. “We started to realize the ones that were really good, were the ones where the bartender was making the ginger syrup themselves from scratch, rather than using an off the shelf ginger beer,” explains Dean. The trio tried to replicate the drinks at home, but with no luck, and that’s where the idea for Merican Mule came from.

For Dean, it’s all about the “drinkability” and the mystery. “My feelings are that it’s a mystery and we’ll never find out its true origins, but it adds to the mystique of the cocktail itself,” he tells me. “I’ve heard it potentially started in New York, I’ve heard L.A. I don’t necessarily side with anything, but I think it’s pretty cool that it is unknown. I think it gives more authenticity to its following.”

More than just a good bar debate topic, Dean sees the following the cocktail has gathered to be worth emulating in his Merican Mule canned cocktail brand. “I think the drink has really established a cult following and obviously it bucked a lot of trends and we’re trying to replicate that, obviously a little differently, but in a similar fashion, create a cult following and pull on a lot of those elements that made it so popular in the first place.”

What makes Merican Mule special is its ingredients and particularly its proprietary ginger beer, which the trio came up with thanks to inspiration from the same L.A. bars that got them started down this path in the first place. “A lot of folks in the canned cocktail game will partner with a cola company and make a Rum and cola or a ginger beer for a mule or a Whiskey ginger or whatever, and for us, because we are able to understand the reason L.A. bars were getting down to the sub-ingredient level, we decided to construct our own proprietary ginger beer,” explains Dean. “Every element within that ginger beer is all stripped out and carefully selected and all comes from the U.S., obviously, otherwise it wouldn’t be Merican Mule.”

Making the first batch of Merican Mules wasn’t easy, though it sounds fun,“It took us about seven months and we went through about 70 different variations initially to get the flavor right, and we’ve gone through hundreds since then for the new flavors and others in the pipeline,” Dean notes.

Most recently, the Connecticut and Los Angeles-based brand released its Fire Mule. It uses the same ginger beer recipe as found across their drinks as well as the Bourbon that’s found in their Southern Mule. To make it they went through a variety of different options for cinnamon, but also added a bit of spice, “so it resonated with consumers in terms of how it was marketed, if you call it a Fire Mule, it’s gonna be a little bit spicy,” explains Dean.

Dean looks at Merican Mule like a craft beer company, “They’re coming out with these interesting seasonal beers during the summer and winter that reflect the time you are in and for us, because we are building the brand around the Moscow Mule, we feel like we can create that same sort of identity with the cocktail.” That’s exactly what they did with the Fire Mule, after all if the holidays have a spice, it’s cinnamon, at least as Dean sees it.

Clearly, the Merican Mule team has done something right because in November, they announced a major investment from the Bishop Family, the founders of Blue Buffalo and SoBe Beverages.

“Finding a partner in a business in any sense is a process,” explains Dean about the brand’s search for a partner. “It’s not just, ‘Hey, I’ve done something free,’ and now someone is interested. It was actually about half the picture, but the other half was, I need to find the right investor because I’m sharing the business and I want to make sure it’s an area I need help with and obviously capital is extremely important, but I think the advisory element of this partnership is more important.”

For Merican Mule, the Bishop Family are the perfect partners. “They are marketing geniuses,” exhuberantly states Dean when asked about what makes the family an ideal partner. “They just have that gift. You can’t teach it. You can’t buy it. Not only have they taken SoBe to the promised land, but they went and did it again with a premium dog food company. Even seeing one success out of someone is impressive, but it’s not really an accident with them. I think they’ve also grown brands from very small to hyper successful as well and that journey definitely changes over the life course of that company. I think their experience having gone through that multiple times has been really valuable and will continue to be as we run into barriers or see opportunities for our company.”

Now with the Bishops helping them guide the ship, it seems like there is no limit to how high Merican Mule can go. “We just opened an office in Connecticut, so we do have an HQ. We’re building out and expanding our staff right now to support further growth geographically, more, further distribution and additional retail partnerships are being lined up,” explains Dean about the nuts and bolts of the business side currently happening. “Then the fun R&D product side, which is what the customer really wants to hear about, we do have new developments that’ll be launching next year in April.”

While Dean can’t tell me exactly what they’re planning for spring it seems like there’s no question it’ll be a hit as Merican Mule continues to move from strength to strength.