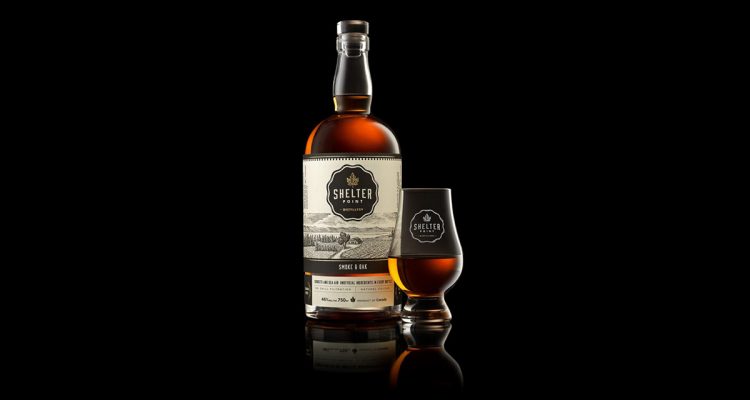 For this expression, the company smoked their own finishing barrels using a smoldering combination of Applewood and locally-harvested Vancouver Island peat.

The company claims that the whisky is a rule-breaker – using 100% unmalted barley grown on-site at Shelter Point Farms as a base. This triple distilled whisky was aged in American oak ex-bourbon barrels for 5 years before a final rest in hand-smoked finishing barrels for 6 months.

Established in 2011, Shelter Point Distillery is located on 380 acres in Oyster River, British Colombia, about halfway up the eastern side of Vancouver Island on the west coast of Canada. The land encompasses 2,000 metres of spectacular oceanfront, a natural mosaic of streams, a salmon-bearing river, wetlands, forests and fields — all shared with native wildlife, from bald eagles and great blue herons to black tailed deer and black bears. Farmed for generations, Shelter Point remains one of the last seaside farms on the Island.

Canadian Whisky has seen a surge in popularity recently, with people across the globe once again lauding it for its quality. Earlier this month, Canada’s Lot No 40 Dark Oak Whisky, distilled by Corby Spirit and Wine, was named the World’s Best Rye at the 2021 World Whiskies Awards. Jim Murray, the once popular whisky writer, named Alberta Premium Cask Strength his top whisky in 2020.

If you’re looking for the top Canadian Whisky in Canada’s eyes, however, Canadian Club 43 was named the best Canadian Whisky at the 2021 Canadian Whisky Awards. Nine independent Whisky experts named the 43-year-old offering from the Beam Suntory-owned brand “Whisky of the Year” at the eleventh annual edition of the competition.