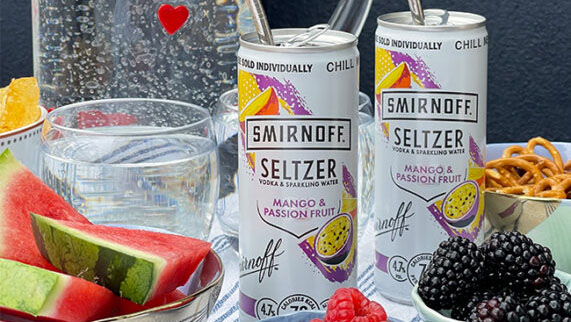 Smirnoff has expanded its Seltzer line with the addition of a mango and passionfruit flavor. Diageo launched the brand’s hard seltzer range last June.

Smirnoff Seltzer Mango and Passionfruit is made up of Smirnoff No. 21 Premium Vodka, sparkling water, and natural fruit. It will join Smirnoff’s line of vodka-based seltzers, which includes Smirnoff Seltzer Raspberry and Rhubarb andOrange and Grapefruit. All three cans come in at 4.7% ABV and contain 72 calories.

“Smirnoff has a long legacy of innovation, so we’re thrilled to add this delicious new mango and passionfruit flavour to the existing portfolio of our seltzers,” said Anna Sablovscaia, Smirnoff’s senior brand manager. “Made with the world’s number one vodka, Smirnoff Seltzers are an alternative to beer or wine for a summer sundowner, perfect for enjoying with friends while capturing the essence of summer.”

Smirnoff Seltzers are available in single-flavor four-packs from Tesco and Supervalu stores in the UK for €10 ($12 USD).

Earlier that same month, Smirnoff Red, White & Berry teamed up with Anthony Anderson to give away 2,021 of the best summers gifts with epic trips and dream experiences as part of the brand’s new summer-long “Smirnoff Summer of 2,021 Dreams” Promotion and to launch its latest product Smirnoff Ice SMASH Red, White & Berry.

In October, Smirnoff brought its Spicy Tamarind Vodka to markets across the United States.