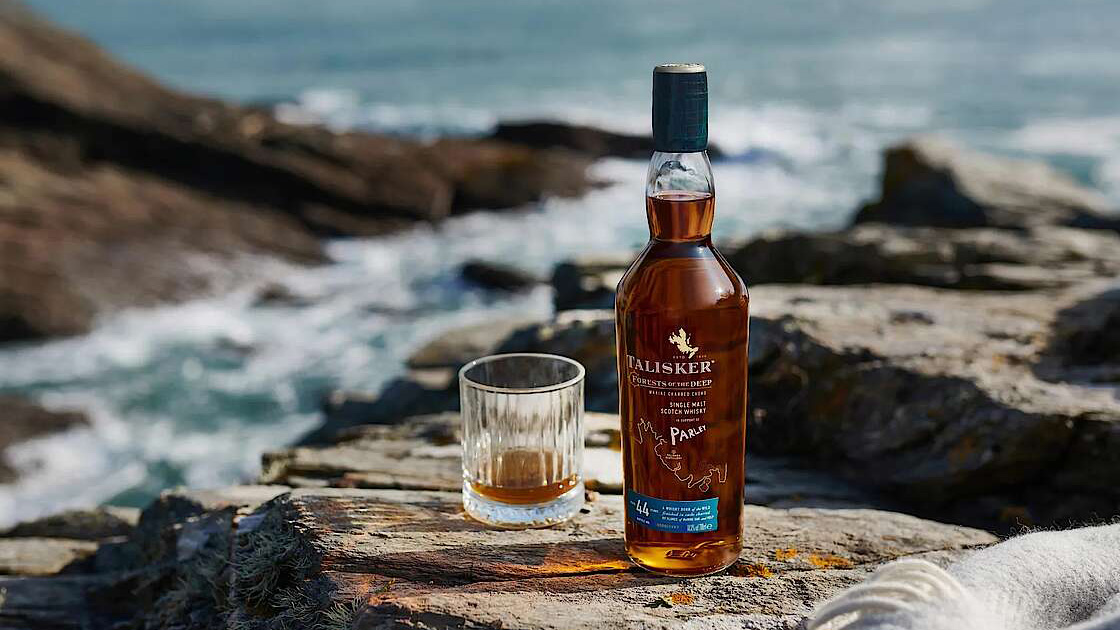 Talisker has unveiled its oldest single malt Scotch whisky to date, Talisker 44-Year-Old: Forests of the Deep. Only 1,997 bottles of this whisky will be released globally.

Talisker 44-Year-Old: Forests of the Deep was created “as a reflection on the power and beauty of our oceans,” says the brand. The Scotch was inspired by an expedition led by Parley for the Oceans, Talisker’s partner in ocean conservation, to one of the world’s largest sea kelp forests near the Cape of Good Hope. Parley explored ‘The Great African Sea Forest’ with an expedition team of scientists, activists and filmmakers who undertook a dive into its depths.

On board the mission yacht were Talisker cask staves, which were later charred using a small amount of sustainably sourced Scottish sea kelp and stave wood shavings, before finishing the whisky’s maturation journey. The Talisker 44-Year-Old: Forests of the Deep whisky was finished in these marine oak casks before bottling.

Parley Founder & CEO Cyril Gutsch said, “Kelp forests are the planet’s underwater architects, and a powerful blue carbon force within the ecosystem that makes Earth habitable.  They support biodiversity and sequester and store carbon dioxide more efficiently than the rainforests. This very special and rare edition of Talisker whisky is a tribute to the beauty and fragility of these great forests of the deep, and our collaborative mission to support their protection.”

Whisky writer Dave Broom added, “This is a fascinating, bold, beautifully mature Talisker made in the old, bold, defiant style.  Some whiskies become refined and elegant with time, others lighten and move into an ethereal state. A few however, move in the opposite direction, becoming richer, more complex and concentrated versions of themselves. This is all about how Talisker’s distillery character shifts over time, refusing to become conventionally beautiful. Instead the oils are magnified, savoury elements emerge, and the smoke is retained, binding it all together. It is sweet, savoury, smoky and saline… and deep. It is Talisker on full power with an energy that is remarkable for its age, a true distillation of place.”

Talisker 44-Year-Old: Forests of the Deep Single malt Scotch whisky will be available globally retailing at £3,800 per bottle. To purchase a bottle, head over to Diageo’s official Malts website.