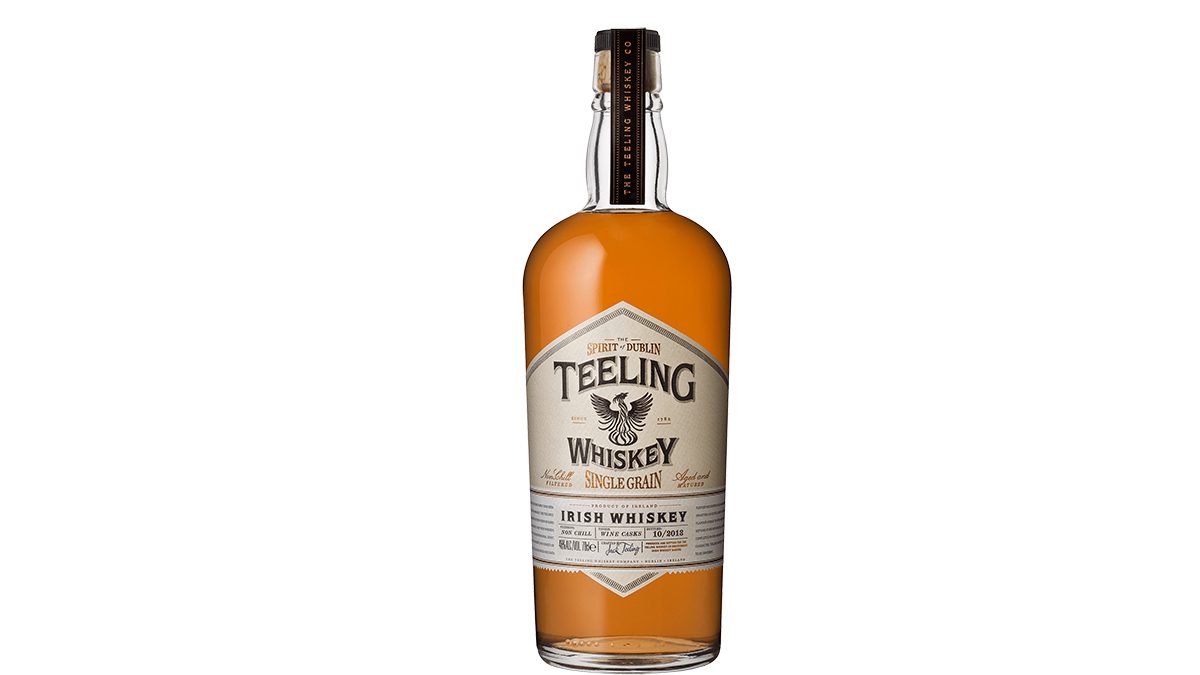 Teeling Single Grain Irish Whiskey has a personality all its own, which shouldn’t be much of a surprise considering the “Unconventional” distillery returned Whiskey-making to Dublin after a 40-year absence. In fact, Teeling holds the distinction of being the first new Whiskey distillery opened in Dublin in 125 years.

Teeling Single Grain Irish Whiskey begins almost entirely with corn, using a mash bill of 95% corn and 5% malted barley, then its triple distilled and aged in French oak ex-Cabernet Sauvignon red wine casks from California. It employs a column distillation process that creates a neutral base that can be layered with additional flavors from the red wine barrel aging.

The nose opens with spice and fruit notes that mingle with an underlying sweetness. The palate has a silky smooth mouthfeel, with a touch of spice and deep berry flavors that balance the sweet undertones. The tannic influence of the red wine creates a unique, short, dry finish.

The Single Grain is best enjoyed neat and serves excellently as accompaniment to dessert.

The Teeling family story dates back to 1782 when Walter Teeling operated a small distillery on Marrowbone Lane in Dublin. In 1987 a descendant of Walter’s, John Teeling, purchased a distillery in Cooley, County Louth, opening as Cooley Distillery in 1989, and thereafter his sons, Jack and Stephen, worked at the distillery until it was sold to Beam Inc.

As part of the sale, the Teelings purchased 16,000 casks of aged whiskey from Beam to continue their distillation operation. Jack Teeling launched Teeling Whiskey in 2012 and thereafter, the brothers returned whiskey-making to Dublin in 2015, in Newmarket Square, in the historical Liberties area. Creation of their distillery was the subject of a TV documentary, “Whiskey Business”, which aired in 2015.

In 2020, Teeling Whiskey announced a special charity 300 bottle release, the first of its Whiskeys to be matured in Irish Virgin Oak, with all profits going to select charities in honor of the Front Line Heroes in the battle against Covid-19