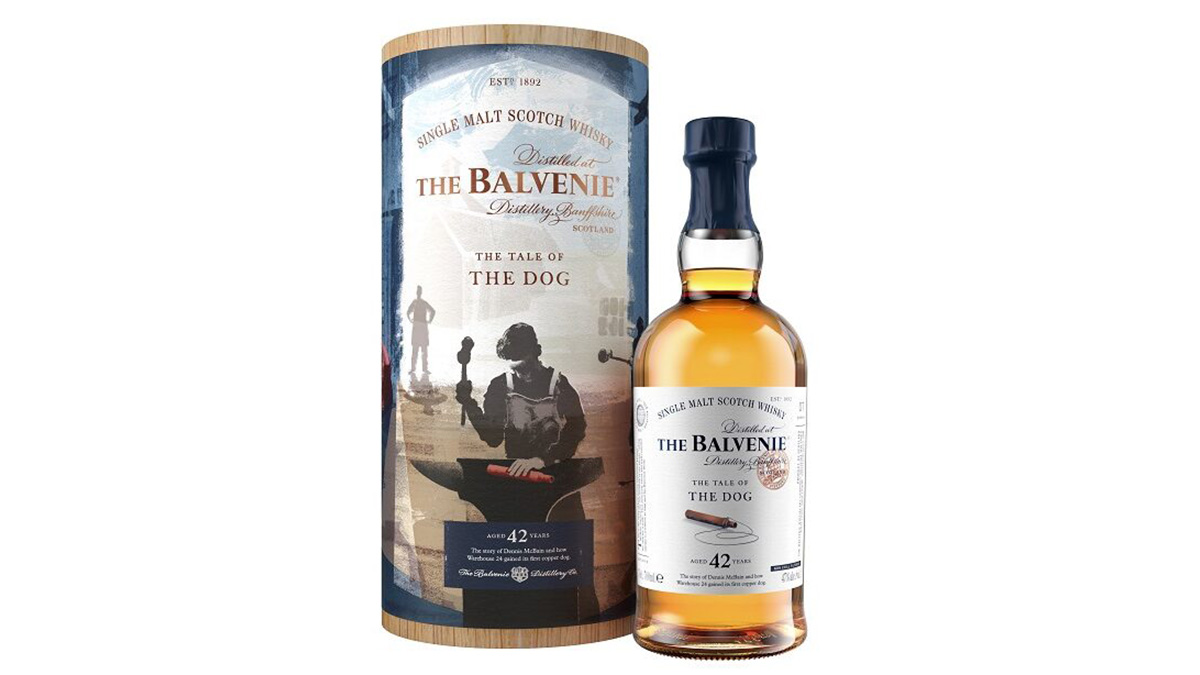 The Balvenie has introduced the latest addition to its coveted Stories range, The Tale of the Dog. The collection of single malt whiskies represents tales of character, endeavor and generational knowledge gathered at the Dufftown distillery by its craftsmen.

Inspired by one of The Balvenie’s longest serving characters, The Tale of the Dog tells the story of one of Coppersmith Dennis McBain’s clearest memories from working at the distillery over 50 years ago. As a young apprentice, McBain was exposed to a new world of distillery life when a brewer asked for a copper dog – a little copper tube once used for siphoning off whisky straight from the cask – to be flattened and put back for its owner to find.

The humbling tale taught McBain what a dog was in the whisky world, why the expression “taking a dog for a walk” was used at the distillery, and that whoever it belonged to had been sent a message, but ultimately given a second chance. McBain’s memory then inspired his suggestion of using dogs instead of unwieldy valinches for distillery tour tastings. And so, every dog used in Warehouse 24 tours is there because of Dennis McBain and his early days at The Balvenie.

“This story captivates people across the world whenever our Ambassadors share it with them,” said Gemma Paterson, Balvenie global ambassador. “It’s so exciting to be able to share it in the form of a whisky now to celebrate such a heart-warming story and one of our distillery’s best loved characters.”

David C. Stewart M.B.E. added: “The Tale of the Dog is one of the stories people most love hearing about The Balvenie – from a time when you used to wonder sometimes if the dogs were taking their share, as well as the angels. These two casks, from 1978 and 1974, are wonderful liquids chosen to represent the story.”

Aged for 42 years, The Balvenie Tale of the Dog is a smooth and honeyed expression that balances mouth-watering toffee flavors, nutty honey spice, and a lingering oak finish. The casks chosen come from a time before the industry stopped the practice of ‘dramming’, where workers received drams while at work.

The Tale of the Dog’s packaging features a replica flattened copper dog, the bottle is encased in a wooden tube wrapped in leather, printed with a bespoke illustration, specific to the liquid, from British artist and printmaker Andy Lovell.

The Tale of the Dog joins four other liquids in the Stories range and will have a limited release. The new expression will be available beginning this month from select whisky retailers and retail at £9,000 ($12,100 USD) per 70cl bottle.

For more information, head over to The Balvenie’s official website.

In July, The Balvenie unveiled The Rare Marriage range, a collection of single malt Scotch whiskies. The line’s first release is The Balvenie Twenty-Five, with two other expressions to follow.