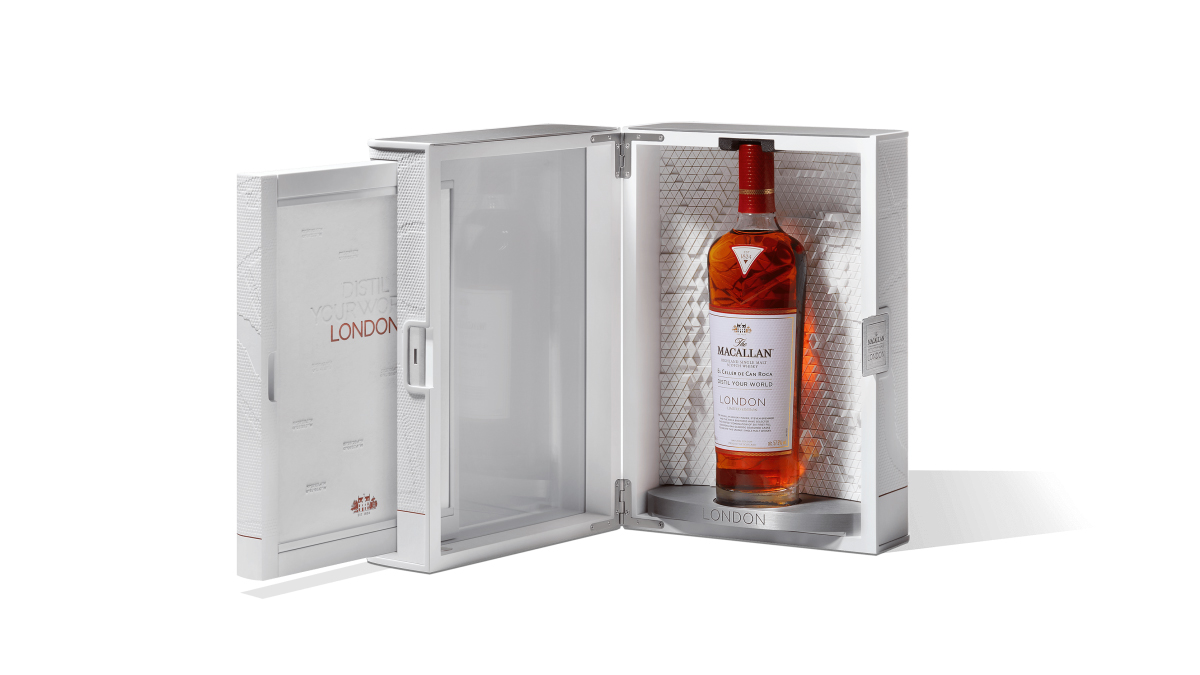 The Macallan has unveiled Distil Your World: The London Edition Whisky. The new limited edition single malt from the Speyside distillery was created to deliver “a sensorial journey through one of the world’s greatest capital cities.”

The Macallan Distil Your World: The London Edition Whisky is part of a new series created in collaboration with the Roca brothers that looks to discover the essence  of some of the world’s greatest cities. The London Edition embodies London’s special charisma, and captures the people, experiences, colors and history that ultimately define the city.

In the new series, The Macallan and the Roca brothers, owners of El Celler de Can Roca in Spain, twice named Best Restaurant in the World, explore different cultures and source inspiration for their own worlds of whisky-making and gastronomy.

During their adventure, The Macallan’s Whisky Maker Steven Bremner and Joan, Josep and Jordi Roca spent time with the craftspeople and creators who fuel London’s inimitable creativity and entrepreneurial drive; the committed leaders who add to its vibrancy; and the special thinkers who understand its past and anticipate its future. They immersed themselves by discovering emblematic buildings and going behind the scenes to uncover the unique flavors and scents that define London and unearthing its vibrant community spirit.

The journey led them to their own complex and sensorial map of the city and with this map as inspiration, they selected the combination of six first fill European oak Oloroso seasoned casks to translate London’s values into a single malt with unique tasting notes representing the spirit of the city.

“London is an international city, a melting pot of culture, cuisine, architecture, and art and its rich heritage and myriad of cultures, combined with a timeless spirit and an innovative nature, made it the ideal playing field for this journey of mastery,” noted Bremner. “It is not just about being there, but about immersing yourself and dedicating time to understand what’s underneath everything you see, and we are proud to have collaborated with the Roca brothers on this exploration.

“Like the London soul, our single malt whisky, matured in its unique sherry seasoned oak casks, delivers rich complexities, harmonious flavours, and vibrant aromas. This whisky is something new – with London notes like curry or the sweetness of Earl Grey tea – but it keeps The Macallan’s signature taste, and that’s the difficult part.”

Josep Roca, said: “The places we visited, the people we met, all that now takes shape in this whisky – our own distillation of the London essence. There is part of umami, the subtle touch of curry, orange, vanilla and raisin. There are some special notes that are really rare to find.”

Distil Your World: The London Edition is housed in a presentation box featuring a triangular engraving design to represent the map of London and red detailing inspired by the city’s red bricks. As well as the limited edition whisky, the box contains a luxurious book capturing the different inspirations behind this single malt, alongside rich London photography, which combined, form a picture of London as created by Steven Bremner and the Roca brothers.

In homage to its birthplace, the edition was unveiled to the world in a window display in Harrods’ world-famous flagship store in Knightsbridge, London on November 1, 2020.

The Macallan Distil Your World series is the next step in the brand’s long-standing partnership with the Roca brothers. They have previously worked together on a range of ventures, including The Macallan Edition No.2 which was inspired by the brothers’ distinctive and dynamic characters and Distil Your World Scotland, a culinary journey through Scotland to explore the country’s rich cuisine tapestry which resulted in an innovative publication and documentary.

Limited to 2,000 bottles worldwide, Distil Your World: The London Edition was bottled at 57.5% ABV and is priced at £2,630 ($3,463 USD) and will be available globally from November 2020, including in Harrods, The Macallan Boutique in London Heathrow and The Macallan Estate Boutique.

Milk & Honey Reveals Whisky Matued In The Lowest Place On...

Glenmorangie Teams Up With Japanese Floral Artist For Limited-Edition 18 Years...